END_OF_DOCUMENT_TOKEN_TO_BE_REPLACED

GOLD erased the last of this week's earlier 2.4% rally in London trade Friday, moving back to $1705 per ounce as silver held 1.3% firmer and platinum prices showed a 4.6% weekly gain.
So far in 2021 – and with global stock markets rising as longer-term interest rates in the bond market have spiked – the price of gold in Dollar terms has fallen by 10.3%, while silver is 3.8% lower.
Platinum prices in contrast have gained 11.1%, and the 7-year peak at $1340 in mid-February saw it reach the lowest discount versus gold since May 2019 at $492 per ounce.
Prior to the 'diesel scandal' breaking in 2015, platinum had traded at a higher price than gold in all but 5 years since 1950, averaging a premium of more than 75% to the yellow metal. 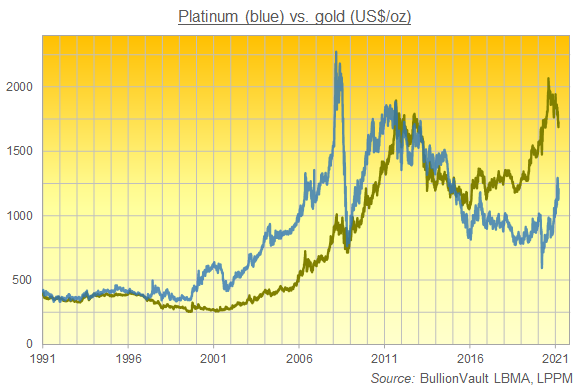 Last year saw platinum supply hit a record deficit against demand of 1 million ounces, the mining-backed World Platinum Investment Council said in its latest data report Thursday.
Covid-led mine closures, plus outages at a key processing plant in No.1 producer South Africa, cut new output by 18%, while total demand fell 7% as "weakness in automotive, jewelry and industrial demand was partly offset by strong investment demand."
Now "The hydrogen revolution is real and it will change the world," says a column in the UK's Telegraph newspaper today, forecasting massive growth for 'green' energy fuel cells using platinum as a catalyst to produce electricity.
"Hydrogen will be a brilliant growth area," agrees fund manager Mark Lacey at UK asset group Schroders, reviewing the "recent euphoria" around the sector's potential.
Also finding around 60% of its annual demand from productive uses, "Silver [meantime] holds its price better than gold on a year-to-date performance," says a note from the precious metals team at French bank and London market maker BNP Paribas, "and is helped by an upbeat Base Metals (Dr Copper) market."
With the gray metal outperforming, " The Gold/Silver Ratio is on 7 year lows [as] 1 gold ounce buys 66 ounces of silver.
"But [while] it could run lower if looking at the long-term average at 50-ish...the massive increase in silver ETFs holdings following the Reddit mania is fading."
After needing to take in 3,400 tonnes of silver inside 4 days to back its extra shares in issue at the start of last month – equivalent to 13% of last year's world mining output – the giant iShares Silver Trust (NYSEArca: SLV) has now shrunk back to its size on the eve of the WallStreetBets forum calling for followers to buy the ETF apparently to "f**k the banks".
The largest gold ETF fund, the SPDR Gold Trust (NYSEArca: GLD), shrank another 0.5% yesterday, with investor liquidation now taking it back to the smallest since end-April 2020.
With gold holding above Monday's new 9-month low of $1676, "Chinese demand [has] continued to underpin price action," says the latest Asian trading note from Swiss refiners and finance group MKS Pamp.
"Physical interest out of India [also] remains evident."
The gap between Shanghai and London gold prices today slipped back towards the typical historic level of $9 per ounce, but that put this week's average incentive for new imports into China – the metal's No.1 consumer market – at $11.50, the highest since end-August 2019.
Domestic prices in No.2 consumer India have meantime edged $1 higher this week to $6 per ounce above London quotes plus import duty and tax, Reuters reports.
After the collapse amid 2020's Covid pandemic and lockdowns, "Retail demand has been gaining momentum," the news-wire quotes Amit Modak, CEO of jewelry chain PN Gadgil and Sons in the western state of Maharashtra.
"Showrooms, especially in small towns, are witnessing good footfalls."