END_OF_DOCUMENT_TOKEN_TO_BE_REPLACED

GOLD and SILVER BULLION trimmed this week's strong gains in Dollar terms on Friday as stronger-than-expected jobs data for November saw the US currency spike from 5-month lows while global stock markets fell and betting on further Federal Reserve rate rises rebounded.
Longer-term borrowing costs also rose, with a drop in bond prices driving 10-year US Treasury yields up 8 basis points from a new 10-week low of 3.50% per annum.
Non-farm US payrolls expanded by 263,000 last month, the Bureau of Labor Statistics estimates, beating analyst forecasts by almost 1/3rd, while the participation rate slipped to leave 37.9% of the working-age population neither in or looking for work.
Even so, and following a revision to September and October's data which knocked their combined total down by 23,000, today's BLS estimate put jobs growth in November at the weakest since December 2020.
The gold price in US Dollars fell $20 from this last night's new 4-month high of $1804 per ounce, cutting the weekly gain to 1.7%.
Silver bullion retreated by 2.0% from the 7-month high of $22.91 touched overnight in Asian trade, but the more industrially-useful precious metal extended November's 12.7% surge – the strongest monthly gain since December 2020 – with a further 4.3% rise across the first 2 days of December.
"The [upwards] trend channel in the Gold/Silver ratio, stemming from pandemic lows, has now been broken," says strategist Nicky Shiels at Swiss refining and finance group MKS Pamp, pointing to the relative cost of gold bullion in terms of silver ounces – now dipping below 80 for the first time since mid-April. 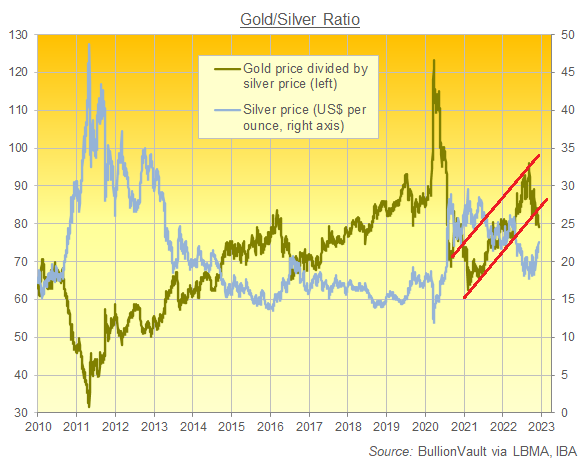 "US Dollar weakness, confirmation of a Fed slowdown from Powell, and follow-through physical buying ensured silver outperformed in November."
With US inflation slowing very slightly to 6.0% on this week's new PCE data, "We [still] need to raise interest rates to a level that is sufficiently restrictive to return inflation to 2%," said US Fed chairman Jerome Powell in a speech Wednesday, widely heard as signalling only a half-point rate hike for December's Fed meeting – the weakest rise since May.
Friday's strong rally in the US Dollar following its drop on Powell's comments saw gold bullion priced in Euros drop 0.9% from Thursday's 2-week high of €1719 while the UK gold price in Pounds per ounce trimmed its weekly rise below 1.0% at £1463.
Today's drop in world stock markets, worsened by the strong US jobs data, cut the weekly gain on the MSCI World Index to 2.5% in US Dollar terms.
Commodity prices also fell back, but US crude oil held above $81 per barrel for its first weekly rise since the start of last month.
The Opec+ cartel of oil export nations will "consider deeper output cuts" at this weekend's meeting, analysts guess, as the market grapples with both the European Union's proposed price cap of $60 per barrel for Russian crude and a slowdown in global demand led by manufacturing giant China's continued 'zero Covid' lockdowns and restrictions, now being eased in some regions – despite the country's fastest outbreaks of C19 since the pandemic began 3 years ago – following widespread protests and unrest.