END_OF_DOCUMENT_TOKEN_TO_BE_REPLACED

GOLD PRICES leapt Friday lunchtime in London as last month's US jobs data came in much weaker than analysts forecast, before giving it all back but heading for the highest weekly finish in four.
Western stock markets were flat overall, holding the EuroStoxx 600 some 1.3% higher for the week as the S&P500 in New York showed a week-on-week gain of 2.4%.
Energy prices meantime rebounded, with Brent crude oil hitting $83 per barrel, a 3-year high when reached amid Wednesday's surge in natural gas costs.
With consensus predicting 500,000 net additions to US non-farm payrolls, the Bureau of Labor Statistics said the economy added only 194,000 jobs in September – the second "big miss" in 2 months for NFP according to Bloomberg.
Before retreating back to $1765, gold priced in the Dollar jumped 0.9% on the data release, reaching 2-week intraday highs at $1781 per ounce as the US currency retreated further from this week's 12-month peak on the FX market.
Silver prices spiked by over 60 cents to reach 3-week highs at $23.15 per ounce before also easing back to $22.89.
That was still 6.8% above last week's 14-month low.
Platinum meantime extended this week's solid gains to hit $1037, its highest since start-August.
"Gold, short-term, is not a good hedge against inflation – [defying] popular belief," says Swiss bank UBS's Global Wealth Management commodities director Wayne Gordon.
"We don't see it outperforming unless growth disappoints and there is a broader risk off, which leads to a reversal of monetary policy trends."
Despite today's weaker-than-expected payrolls figure, US unemployment slipped to 4.8% on the BLS data, aided by a drop in people actively seeking work.
That's the lowest since March 2020, eve of the Covid Crisis hitting America. 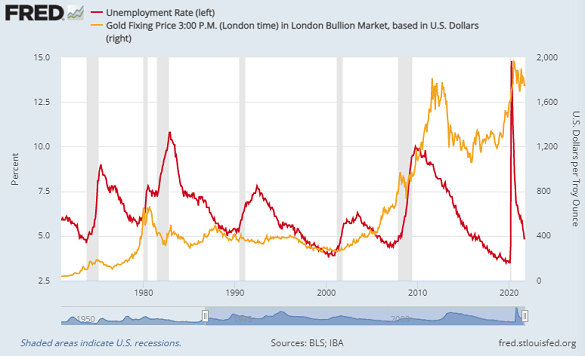 Going into today's NFP data, gold prices in China – the metal's No.1 mining, importing and consumer nation – showed a $10 premium to quotes in the global hub of London.
Extending the gap seen before the National Day holidays by $1 per ounce, that was firmly above the historic average for this incentive to new bullion imports.
US gold-backed ETF trust funds in contrast were mixed, closing Thursday with the giant GLD unchanged in size for the week so far while shareholders in the smaller IAU liquidated 0.4% of the fund, putting it on track for a 2nd consecutive weekly outflow.
Also in China on Friday, the People's Bank reversed the heavy injections of cash it made into the money markets ahead of the last week's National Day holidays, draining the most funds in a year and "normalizing policy" according to one strategist.
"It suggests less probability of a near-term reserve-requirement-ratio cut and will likely pressure bond yields higher."
European government bond yields rose further today as debt prices fell, driving 10-year German Bund rates to their least negative since June at -0.17% per annum.
Benchmark UK Gilts meantime offered new buyers 1.14% per annum, the highest 10-year yield in 29 months, as energy-market regulator Ofgem said "significant price rises" are set to hit consumers as Europe's wholesale gas and electricity costs hold near their latest all-time records, and a survey of recruitment firms said starting salaries and wages for UK temping staff are rising at the fastest pace since 1997.
Euro gold prices today touched 5-week highs at €1535 before edging back €5 per ounce, while the UK gold price in Pounds per ounce regained last weekend's £1300 level.
Ten-year US Treasury yields – integral to pricing many consumer and business loans in the world's largest economy – meantime slipped only to 1.57% per annum.
That was just 1 basis point below Thursday's 3-month high in Washington's cost of borrowing.