END_OF_DOCUMENT_TOKEN_TO_BE_REPLACED

GOLD and SILVER PRICES fell Tuesday alongside stock markets, bond prices and many commodities, falling back to $1820 and $27.20 per ounce ahead of tomorrow's much-hyped US inflation data.
With falling bond prices driving longer-term interest rates higher across Western economies, both US and European crude oil prices fell 1.3% for the day despite East Coast gas stations the world's largest economy "running dry" amid the continued shutdown of a major pipeline.
Germany's 10-year borrowing cost jumped to its least negative since March 2020 above -0.16%, and 10-year UK Gilt yields added 10 basis points for the week so far at 0.85% per annum.
Copper rose to yet another all-time high, more than doubling from this time last year, while iron ore jumped another 5% to set its own new records.
Analysts expect tomorrow's US Consumer Price Index data to show annual headline inflation of 3.6%, the fastest 12-month jump in the cost of living since September 2011, the month of gold's financial-crisis peak above $1900 per ounce.
Last spring saw CPI inflation sink to just 0.2% per year amid the first wave of the global Covid Catastrophe, as crude oil prices went negative and shop prices plunged amid social and economic lockdowns.
Over the next decade, the cost of living – as suggested by 'breakeven' rates in the US bond market – will now rise by more than 2.5% per year according to the gap between conventional and inflation-protected yields on 10-year debt.
That's the highest such 'forecast' since spring 2013, and comes only 0.2 percentage points below the series peaks of 2004 and 2005. 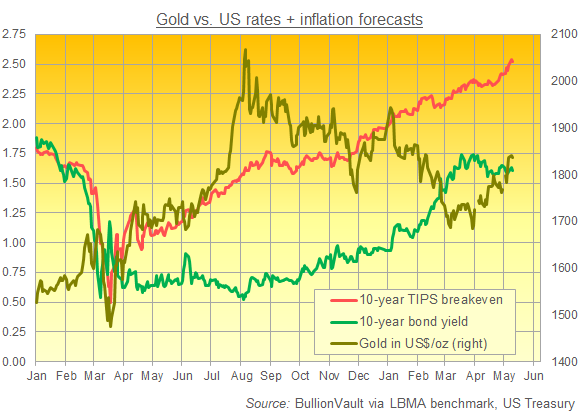 The EuroStoxx 600 index fell 2.4% today from Monday's new all-time high after rising by more than 1/10th for 2021 to date.
So-called crypto-currency Bitcoin meantime fell over 4% against the Dollar, erasing May's rally and trading over 14% below last month's new record despite NFL star Tom Brady – husband of supermodel Gisele – apparently confirming "rumors" that he is "loading up".
'Comedy crypto' Dogecoin meantime extended its plunge, now down by 1/3rd from Saturday's record high ahead of tech-celebrity Elon Musk's widely-slated appearance on US entertainment show SNL, where he disappointed viewers expecting him to pump and push its price higher.
Gold prices in China, the metal's No.1 consumer market, earlier closed Tuesday at 3-month highs as the Yuan weakened against the US Dollar and Asian equities lost over 1% on average.
The Shanghai premium for gold bullion, over and above comparable prices in London – heart of the world's gold trading and storage network – slightly recovered to $5.31 per ounce today,
"A session of consolidation during Asian trade on Tuesday," says the daily trading note from Swiss refining and finance group MKS Pamp, but with "good interest" on a dip to $1830.
"Top-side price action remains capped by the 200 day-moving average towards $1850, with further pain for shorts [ie, bearish trader] through this key pivot having the potential to accelerate gains on a break higher."
No.2 gold consumer India should see increased investment and jewelry demand ahead of Friday's Hindu festival of Akshaya Tritiya reckons one broker, "supporting the overall sentiment."
But despite the BJP government of Narendra Modi continuing to reject domestic and international calls for a full lockdown amid India's worsening Covid Crisis, festive shopping and gatherings are likely to be quiet.
"Offers are on," says one jeweler in neighboring Dubai – a major holiday and retail destination for Indian travellers – "with retailers removing making charges on some collections, or selling them 'at cost', which essentially means a 20% discount.
"These are not normal times."
Oil demand in India fell 7.2% in April versus the same month in 2019, says Bloomberg correspondent Javier Blas.
Gasoline prices at US pumps, in contrast, have now jumped to their highest in 6.5 years, breaching $3 per gallon in 16 states amid the ongoing shutdown of the major pipeline supplying heavily-populated East Coast cities, led by New York, from Texas.
"Panic buying driving gasoline demand," says Blas, as the Colonial pipeline carries 2.5 million barrels a day, almost half of the East Coast's daily supply of diesel, petrol and jet fuel.
"Our goal is to make money and not creating problems for society," says cyber-criminal gang DarkSide, whose ransomware attack on Colonial has caused the shutdown.
Neither the giant GLD or IAU gold-backed ETF investment trusts saw any change in size on Monday, while iShares Silver Trust (NYSEArca: SLV) saw investors liquidate 0.2% of their shares.