END_OF_DOCUMENT_TOKEN_TO_BE_REPLACED

GOLD PRICES rallied with global stock markets Wednesday while silver leapt to 8-week highs, gaining versus a rising US Dollar as longer-term interest rates edged back from their latest spike to multi-year highs as new data confirmed multi-decade highs for inflation in developed Western economies.
With US inflation running at the fastest since 1982 and Germany's cost of living rising quicker than anytime since 1991, UK consumers saw the cost of living rise 5.4% across 2021, the Office for National Statistics said today, beating the inflation peaks of 2008 and 2011 to show the fastest increase since 1992 on the Consumer Price Index.
Back then, UK base rates were set at 10.4% by the Bank of England.
Last month the BoE raised its key rate for the first time since summer 2018, taking it up to just 0.25% per annum while continuing to hold £895 billion ($1.2 trillion) of mostly government debt, a "QE" strategy begun during the global banking debt crisis of 2007-2012 and accelerated during the massive Covid stimulus spending of 2020. 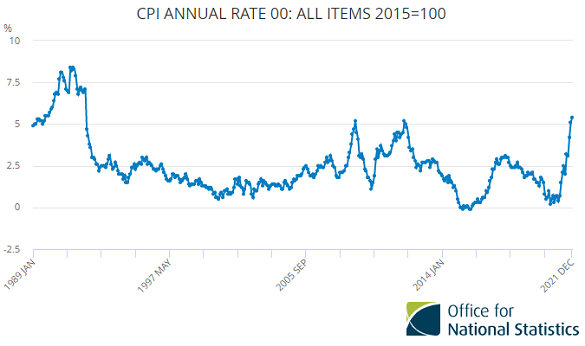 UK Pound gold prices today recovered an overnight dip to trade 0.7% higher for the week so far at £1338 per ounce.
Euro gold touched 2-week highs at €1609 while wholesale bullion for US Dollar investors reached $1825, unchanged for 2022 to date.
Silver meantime jumped to $23.85 per ounce, outpacing gold's rise for the week so far almost 8-fold and cutting the Gold/Silver Ratio of the safe-haven versus more industrially-useful precious metal's prices back below 77 for the first time since late-November.
Looking at the US Fed, now facing inflation above 7% with rates at 0%, "It is not a question of if, but how quickly and strongly interest rates will be raised," Reuters quotes one FX trader at a German bank.
With bond prices and interest-rate futures now showing that traders expect 4 rate rises from the US central bank by end-December, "There's speculation about increasing aggression from the Fed," the Financial Times quotes one portfolio manager, who notes how US investment bank J.P.Morgan's CEO Jamie Dimon "casually" suggested last week that 2022 could bring 6 or 7 hikes.
Fewer than 1-in-10 bets on next week's Fed meeting see a rise coming in January.
But with increased chatter about an 'inter-meeting' hike or the Fed raising not by 25 but by 50 basis points at its March meeting, "A shock Fed hike [would] also pull policy mistake risk forward and with it recession predictions," says strategist Nicky Shiels in a trading note from Swiss refining and finance group MKS Pamp.
"Gold is smart and forward looking," she suggests, and with the yield curve gap between short-term and long-term rates now flattening as China's central bank moves to cutting its key interest rate, this "is highlighting a recession sooner than expected."
As gold prices rose Wednesday, inflation-protected Treasury rates meantime pulled back sharply today from yesterday's 22-month high, dropping 5 basis points to minus 0.64% per annum on 10-year TIPS after rising almost 2/5th of a percentage point from this time last month – the fastest surge since the Covid Crash chaos of March 2020.
Wednesday's retreat put the gap between 10-year TIPs and 10-year conventional Treasury rates up at 2.50%, the highest such inflation 'forecast' implied by the bond market in just over a week.
That was a little above the last 12 months' average 'breakeven' inflation rate of 2.38% and below November's series record of 2.76%. 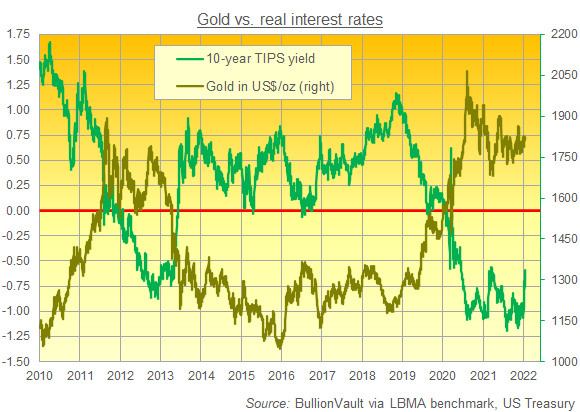 "The rerating in real yields higher is really baffling short-term gold traders," says Shiels at MKS.
Based on gold's typically strong inverse correlation with 10-year TIPS yields, "Model implied prices put gold at $1680, more than $130 lower!"
Investors sat tight Tuesday in both the GLD and IAU gold-backed ETF trust funds, leaving them unchanged in size yet again.
The SLV silver ETF in contrast shrank for a 3rd session in a row as shareholders sold into rising silver prices.