END_OF_DOCUMENT_TOKEN_TO_BE_REPLACED

GOLD PRICES retreated from multi-week highs against most major currencies on Wednesday morning before rallying back in Euros and UK Pounds as long-term borrowing costs rebounded, as did the US Dollar, amid what Bloomberg calls "fizzling Fed-pivot talk".
Global stock markets also reversed course as Dollar gold prices fell near to $1700, snapping a 2-day rally that had accompanied a sharp rally in government bond prices.
But crude oil extended its jump to almost 10% for the week so far as the Opec+ cartel of oil-producer nations agreed to cut daily output by 200 million barrels per day, equal to 2% of global daily demand.
Weakness in the Euro currency on poor economic data saw gold hit €1736 per ounce, the highest in 5 weeks.
The UK gold price in Pounds per ounce rose to £1512 by the end of London trade as Gilt prices fell with Sterling, pushing up borrowing costs, while new Prime Minister Liz Truss used the word "growth" 29 times in her speech to the ruling Conservative Party's annual conference.
Like gold prices, silver also dropped hard on Wednesday in US Dollar terms as bond yields rebounded and stock markets fell, dropping more than $1.25 per ounce from yesterday's 3.5-month high of $21.24 after the more industrially-useful precious metal had jumped over 20% from start-September's 2-year lows.
Trading volumes in London and Zurich gold have risen by 29.3% but grown only 2.3% in silver over the last week, says new data from the London Bullion Market Association, with trading in options contracts on the gray metal – a leveraged trade used by industry players for hedging prices as well as by speculators wanting to bet on the metal's direction – sinking by 19.5% from the week before.
Silver then rose Wednesday afternoon, regaining almost half its earlier plunge in Dollar terms and nearing yesterday's 5-month highs in EUR and GBP. 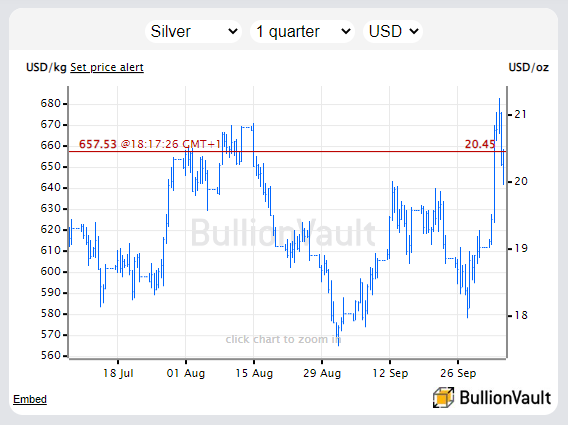 "The market was too quick to price in the 'peak rate' story," reckoned one currency strategist early Wednesday.
"Price pressures are set to remain sticky for some time, and while the Fed might be closer to smaller incremental hikes than not, playing this via a 'peak rate' view is fairly dicey."
After a raft of mixed and weak US economic data had prompted "Fed pivot" chatter over the last week, new data said Wednesday that the US trade deficit in goods and services was the smallest in August since May last year.
September then saw US payrolls expand by 208,000 according to the private-sector ADP estimate, ahead of analyst forecasts for US jobs growth and accelerating by 12% from August's upwardly-revised figure.
Services-sector activity shrank however last month, new US PMI survey data said, while if fell more sharply across the 19-nation Eurozone but accelerated in Japan and held dead-flat in the UK.
With the US currency rallying 1.2% on its trade-weighted index from yesterday's 2-week lows, gold priced in the Dollar lost nearly $30 per ounce from Tuesday afternoon's 3-week peak above $1729 before rallying $10 again.
US benchmark crude oil meantime rose to $88 per barrel, a 7-year high when hit in February, with crude oil then rising again to $120 per barrel as Russia's invasion of Ukraine hit financial markets in early March.
Betting on next month's US Fed policy decision from the US Fed now sees a 2-in-3 chance that interest rates will rise to a ceiling of 4.0% per annum – a move now requiring a fourth consecutive 0.75-point hike.
As recently as June, the market put the odds of Fed rates reaching 4.0% in November at zero.