END_OF_DOCUMENT_TOKEN_TO_BE_REPLACED

GOLD PRICES sank to 2-week lows in London trade Thursday, losing 2.3% from last week's high while silver dropped over $1 per ounce for the day as longer-term interest rates leapt to multi-month and multi-year highs following "hawkish" comments in the US Federal Reserve's latest meeting notes, released yesterday.
"Participants generally noted that, given their individual outlooks for the economy, the labor market, and inflation, it may become warranted to increase the federal funds rate sooner or at a faster pace than earlier anticipated," say the minutes from mid-December's Fed meeting.
"Some participants also noted that it could be appropriate to begin to reduce the size of the Federal Reserve's balance sheet relatively soon after beginning to raise the federal funds rate" – actively reversing 'quantitative easing' asset purchases for the first time since the tool was first used during the global financial crisis of 2008.
Despite Asian and European equities having risen earlier in the day, the MSCI World Index ended Wednesday down 1.4%, its steepest 1-day loss since the last day of November, with Thursday extending those losses globally as Japan's Nikkei lost 2.8%, China's CSI300 lost 1.0% and the EuroStoxx 600 dropped 1.2%.
Following the Fed's release, gold prices sank almost $40 per ounce to hit $1787 by lunchtime in London, while silver prices sank 4.9% to trade just a few cents above $22 per ounce.
A rate rise in March now looks certain, says betting on the Fed's key interest rate, with prices on Fed Fund futures contracts putting the odds of "no change" below 29% for that month.
The largest single probability for June's Fed meeting then forecasts 2 rate rises by mid-year, showing a chance of 45% according to the CME's FedWatch tool.
Ten-year US Treasury yields today hit 1.73% following publication of the Fed's meeting minutes, the highest rate since last March marked the start of US inflation's upsurge on 12-month comparisons.
With that nominal borrowing cost rising 0.21 percentage points since this time last week – the fastest since September – inflation-linked yields rose faster still, with 10-year TIPS rates hitting their least negative since mid-June at minus 0.81% with the quickest 1-week rise since February 2021, up by 25 basis points from last Thursday. 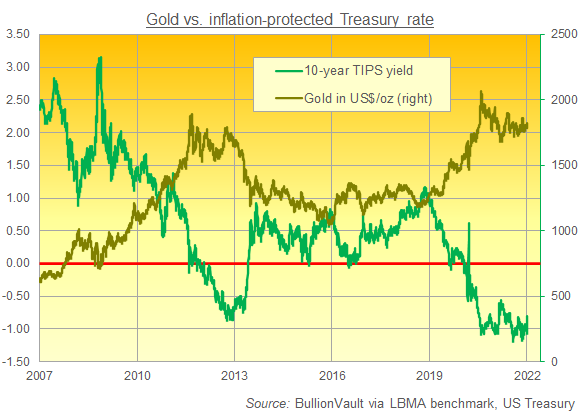 "There are few financial relationships that have held up as well as that between the price of gold and the yield on inflation-protected Treasuries," says the Buttonwood column in the latest edition of The Economist magazine.
"The lower real, safe yields are, the greater the appeal of an asset without a yield that may rise in value.
"Over the past decade, though, gold has been the less reliable of the two. If you had simply held the iShares TIPS bond exchange-traded fund in that time you would have made 35%, more than double what you would have earned by holding gold."
Over the last 15 years, the stock price of the iShares TIPS ETF (LON: ITPS) has risen by 91.9%, while the SPDR gold-backed ETF (NYSEArca: GLD) has traded 167.5% higher.
Since January 2020, eve of the global Covid Crisis, ITPS has risen by 10.5% while the GLD has gained 14.7%.
Prior to the release of the Fed's latest meeting notes Wednesday, physical gold traded through the LBMA Gold Price auction had found the global benchmark price to be $1826 per ounce, a rise of $15 from Tuesday's price but on wanted volume smaller by more than 25%.
Versus the prior 3 months' average, Wednesday's PM London gold price rose 1.7% but on volumes almost 1/3rd lower.
Energy prices meantime rose again Thursday as a major pipeline for Russian gas to Europe flowed eastwards for the 17th day running amid political tensions over Ukraine, but base metals fell with precious and agricultural commodities retreated as a new United Nations report said food prices rose 28% worldwide last year to the highest in a decade.
Uranium prices meantime jumped over 8% to a 1-month high on speculation that supplies from Kazakhstan – which produces 2/5th of the nuclear material – will be disrupted by the state of emergency spurred by energy-price riots, demonstrations and the resignation of the government.
With German Bund yields jumping to -0.04% – their least negative since May 2019 – the Euro gold price sank to €1580, its lowest in 3 weeks and 2.1% below yesterday's 7-week high.
The UK gold price in Pounds per ounce plummeted to £1323, its lowest since the first week of November and more than 5% below that month's 2021 peak.
UK borrowing costs today challenged October's 2.5-year highs, jumping to almost 1.15% per annum on 10-year Gilts.