END_OF_DOCUMENT_TOKEN_TO_BE_REPLACED

GOLD BARS traded in London's wholesale market continued to hold yesterday's higher ground against all major currencies on Tuesday, trading above $1800 per ounce and briefly touching €1540 for Eurozone investors for the first time this month.
The gold price in UK Pounds per ounce rose within 35 pence of £1320, its highest in 5 weeks.
Platinum meantime extended its rally, touching $1025 before easing back $10 per ounce, while fellow industrial-precious metal silver also hit a 1-week high, rising above $23.75 per ounce.
That capped the Gold/Silver Ratio – a simple measure of the 2 formerly monetary metals' relative prices, taken by some analysts as a guide to the financial markets' level of economic fear – around 76 ounces of silver per 1 ounce of gold, near the highest of 2021 so far and sharply above February's 7-year low, hit amid the #silversqueeze ramp on social media. 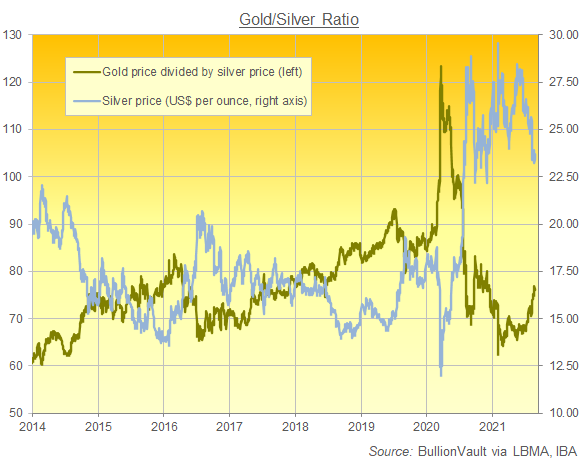 Monday's strong rally for precious-metal bullion prices saw net liquidation of the world's largest gold-backed ETF, shrinking the quantity of gold bars held for the GLD trust fund by 0.5% to its lowest level since April 2020.
The giant iShares Silver Trust (NYSEArca: SLV) also continued to see net investor selling despite yesterday's price rise, shrinking for the 4th session in a row to reach its smallest size since start-December 2020.
"Stocks are up, Dollar is down, and it's all being driven right now by the likelihood that the Federal Reserve might push back tapering further due to the Delta variant," reckons market strategist Bob Haberkorn at derivatives brokers RJO Futures in Chicago.
Currently holding overnight Dollar interest rates at zero while creating and spending $120 billion per month to buy government and mortgage-backed bonds, US Federal Reserve chairman Jerome Powell will speak Friday on "The Economic Outlook" at the now-online-only Jackson Hole central bank symposium.
Last week saw the Reserve Bank of New Zealand postpone a widely-expected 0.5% hike to its zero interest rate, saying today that it was because "it would have been hard to communicate...on the same day the country was locked down" against its rising Covid infection rate.
Non-voting US Fed member Robert Kaplan – who only 3 weeks ago called for QE tapering to begin "soon" – now says he may "adjust" that view because of the Delta variant's impact on economic activity.
"Delta angst is easing," claims a headline at Bloomberg, pointing to Brent crude oil extending its rally from yesterday's 3-month low to almost $5 per barrel by lunchtime in London, briefly touching $70 for the 1st time in a week.
While major government bonds and longer-term yields were little changed, Asian stock markets also rose alongside commodities, reportedly buoyed by ARK investment manager Cathie Wood "bottom fishing" in Chinese tech stocks despite Beijing's continuing crackdown on financial, data, education and other apps.
European equities in contrast slipped by 0.3%, but New York's S&P500 index opened Tuesday's trading at fresh record highs, more than 38% above its level before the global Covid pandemic began in New Year 2020.
Sales of small gold bars and bullion coins have offered "a bright spot for Western gold investment in 2021" says analysis from specialist consultancy Metals Focus, noting that while European demand "has long been dominated by German speaking areas...[where] investment has posted notable gains since the start of the Covid crisis, interest in the yellow metal has also picked up rapidly in non-German speaking countries."