END_OF_DOCUMENT_TOKEN_TO_BE_REPLACED

GOLD PRICES flat-lined for the week near multi-month lows but silver rose as the end of London trade neared on Friday while global stock markets fell and a drop in global bond prices sent borrowing costs higher again.
The Japanese Yen sank to new 3-decade lows versus the Dollar as Tokyo prepared a fresh stimulus budget, and Sterling also dropped on the currency markets amid the political chaos of 140,000 members of the ruling Conservative Party getting to choose the Prime Minister of the world's 6th largest economy for the 3rd time in 3 years.
With the disgraced Boris Johnson's replacement Liz Truss resigning yesterday after 6 shocking weeks in post – and with the Pound's fall driving the US Dollar back up towards last month's 2-decade highs on its trade-weighted index – "We want, above all else, stability," said France's President Macron before a European Union summit in Brussels.
Italy's ambassador to the UK meantime blasted The Economist magazine for comparing the UK's current turmoil to the "oldest of stereotypes" about the EU's 3rd largest economy.
Gold priced in the Euro bounced today as the Dollar rose, but flirted with its lowest weekly finish since February at €1688 per ounce, while the UK gold price n Pounds per ounce rallied to £1465 from the 12-week low hit on news of Truss' exit yesterday.
Down 1.5% for the week, gold priced in the US Dollar bounced and then slipped to trade within $10 of end-September's 2.5-year low at $1614.
Silver prices in contrast held flat for the week overall but slide 3.2% from yesterday's peak at $19 per ounce to trade within $1 of end-August's 2-year low.
Silver's strong 2022 global industrial and small-bar-and-coin demand has seen outflows from London and New York stockpiles of large-bar silver now total 12,000 tonnes since January, says Rhona O'Connell at brokerage StoneX in her notes from this week's annual conference of the London Bullion Market Association.
"The feeling [among some conference speakers] was that the metal was coming out and the market was absorbing it; I tend to think of it the other way round – it's coming out because the market wants it."
Silver exports from major-supplier China have tailed off in contrast to London and New York, says O'Connell, averaging 317 tonnes per month from January to August versus 374 across 2021 with LBMA attendees saying those flows have slowed further since the summer. 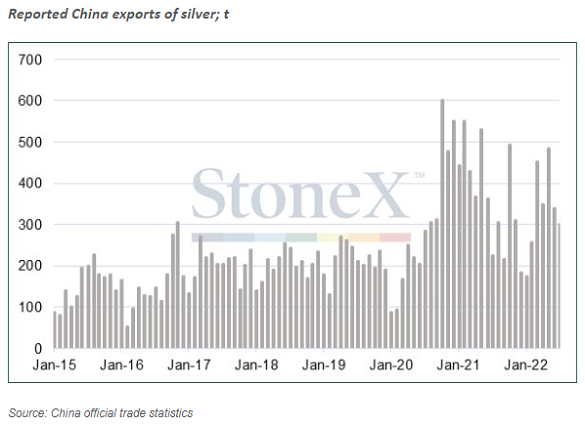 "China supply of silver into the west depends on the level of China manufacturing," says O'Connell at StoneX. "There's very little coming out at present, and it doesn't look as if there are currently any [export] quotas in place (but base metal by-product exports are permissible)."
While that suggests stronger Chinese industrial activity, "Demand for crude oil has been muted in recent months as Beijing continues its zero-Covid strategy," says commodity strategist Daniel Hynes, enforcing strict lockdowns amid only a handful of cases relative to global levels of C19 infection.
Rumor says "officials have been recently debating whether to ease restrictions for visitors to the country," Hynes goes on, signalling "a possible change in strategy that could ultimately lead to a revival in economic activity."
Crude oil prices rallied today, adding more than $4 per barrel of European Brent from Tuesday's 3-week low to regain last Friday's level around $92.
With silver prices also flat for the week in Euro, Canadian and Australian Dollar terms, the industrially-useful precious metal showed its strongest rally against the Japanese Yen, now sunk to the lowest in 32 years at worse than ¥150 per US Dollar.
Today's Yen fall came as a magnitude 5.0 earthquake shook the Fukushima region – but with no damage reported – and new data said September saw consumer prices rise 3.0% per year, the fastest rise in the cost of living in 31 years.
Formerly an export powerhouse, Japan also logged a record ¥11 trillion trade deficit in the 6 months to October.
"We are focused on volatility, and there is no change at all in our stance that we will take decisive steps when we see such movements," Suzuki said at the Finance Ministry.
"I don't comment on specific currency levels," said Japanese finance minister Shunichi Suzuki, but "we are focused on volatility...and will take decisive steps when we see such movements."
Last month the Finance Ministry intervened in the FX market for the first time since 1998, buying Yen to try supporting its value at ¥145 per Dollar.
"If there is a power vacuum in Britain, then it will spur Dollar-buying against the Pound," Kyodo News quotes a Tokyo analyst at French bank Credit Agricole, "making the greenback stronger against all other currencies, including the Yen."
Rumors today said Tokyo's ruling coalition is planning new spending of ¥20 trillion ($132bn) to try averting recession, with some members calling for additional stimulus half-as-large again.
Japanese government bond prices slipped, edging 10-year yields back above the 0.25% per annum ceiling set by Bank of Japan policy.
Gold priced in the Yen today rose to ¥7,920 per gram, more than 16% higher for 2022 to date.