END_OF_DOCUMENT_TOKEN_TO_BE_REPLACED

GOLD and SILVER split on Friday, with the yellow metal failing yet again to hold above $1900 per ounce as its more industrially-useful cousin set its highest weekly close since last August's 7-year high.
Gold prices retreated to make a small weekly loss, down $8 per ounce at $1883, as world stock markets set fresh all-time highs, cryptoasset Bitcoin held flat, and longer-term interest rates showed their steepest fall in 12 months as bets on that inflation will keep rising fell back.
Silver in contrast rose and held its gains, trading above $28 per ounce around today's the LBMA benchmarking auction.
That meant silver showed its highest midday-Friday level since the first week of August 2020 marked a 7-year high.
Gold and silver prices have since 1968 gone in the same direction on 75.8% of all trading days. 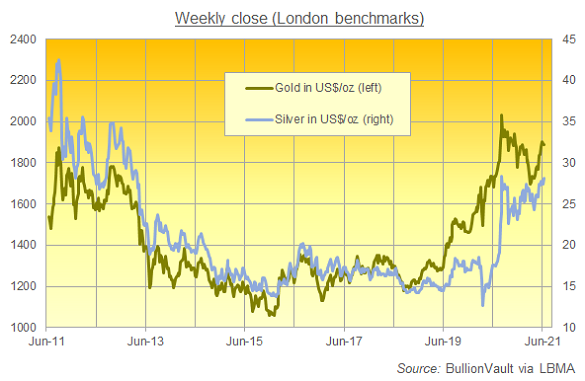 Falling by 11 basis points from this time last Friday, the US 10-year Treasury yield retreated despite US consumer-price inflation yesterday giving its highest reading in almost 3 decades.
Washington's 10-year borrowing cost hasn't fallen this hard since late-June 2020 marked the start of gold's surge to new all-time highs above $2000 per ounce.
Against a fall in yields of this size, gold's weekly drop of $5 per ounce – down to $1886 – would be the first and worst such drop since April 2016.
Week-to-week, the gold price has moved in the opposite direction to 10-year yields 61.9% of the time over the last decade.
"We agree with the Fed that elevated inflation pressures will prove short-lived," says strategists at Swiss bank and London bullion market maker UBS, pointing to the US central bank's repeated forecast that Spring 2020's Covid Crash in commodity prices would cause a temporary jump in annual inflation readings.
"What we're seeing is a market that believes in the Fed," agrees brokerage Pepperstone in Melbourne.
"We're going to get tapering [of QE money creation and bond buying by the Fed]. But it's going to get done a such a snail's pace."
After "yet another upside inflation surprise" in Thursday's US CPI data, adds a trading note from Swiss refiners and finance group MKS Pamp, "the muted [and] lower reaction in 10-year yields back below 1.5% and the decline in breakeven [inflation] rates implies investors have committed to the Fed's transitory inflation tone.
"[While] inflation concerns take a backseat to the labor market [for policymakers], this creates an optimal backdrop for upside precious...[as] gold and silver remain elevated at technical inflection points."
Gold's overnight price rally in Shanghai trade cut the discount for bullion landed in China – the metal's No.1 consumer nation – as low as $5 per ounce before reaching over $10 again around the city's official benchmarking as the Yuan slipped back on the currency market.
Discounts to London quotes in No.2 consumer India meantime held flat at last week's $12 level, Reuters reports, also suggesting a glut of supply over domestic demand as the sub-continent's economy continues to struggle amid the Covid pandemic and lockdowns.
"Slowly, businesses are opening up in a few states," says Mukesh Kothari at RiddiSiddhi Bullions in Mumbai. "As new coronavirus cases are falling, expectations are most states will ease restrictions in the next few weeks."
"Central bank gold buying gathers steam," says a blog from the mining industry's World Gold Council, pointing to sharp increases in bullion reserves for Hungary and Thailand so far in 2021.
Inflows to gold-backed ETFs have meantime been positive so far this week for both the giant GLD and smaller competitor IAU trust funds, expanding by 0.1% and 0.2% since last Friday's finish.
The giant SLV silver ETF was on track Friday for its 1st weekly outflow in 4, shrinking by 0.4% on investor liquidation ahead of the precious metal's pop back above $28 per ounce today.
Thursday's price rally from 1-week lows at $1870 after the US inflation data coincided with a sharp jump in Comex gold futures and options trading according to the CME exchange, with volume in gold derivatives up from 55% from Wednesday's multi-week low.
So-called cryptocurrency Bitcoin meantime held flat for the week on Friday,  following news that Central American nation El Salvador has approved the young President's call to adopt it as "legal tender".
"Adoption of Bitcoin as legal tender raises a number of macroeconomic, financial and legal issues that require very careful analysis," said a spokesman for the International Monetary Fund, from where El Salvador is currently seeking US$1 billion in finance.
That loan is already in doubt after President Bukele – enjoying a 90% approval rating – fired senior judges plus El Salvador's top prosecutor amid an investigation into his links with criminal gangs, and sent 'loyalist' followers to replace them, accompanied by armed guards.
Several other Latin American countries could be about to follow El Salvador's move on Bitcoin, claims financial freesheet CityAM, quoting a "global financial expert".
"You bet more crypto regulation is needed," says US Senator Elizabeth Warren, calling the sector a "new Wild West" and criticizing the energy consumed in 'mining' new tokens.
Cryptoassets such as Bitcoin – where the token does not represent any underlying asset – "pose additional and higher risks" than asset-backed token, the Basel Committee for global banking regulation said yesterday, proposing that banks holding such things on their balancesheet should carry an additional and equal sum in cash, the most "conservative prudential treatment".