END_OF_DOCUMENT_TOKEN_TO_BE_REPLACED

GOLD BULLION prices fell sharply in Asian and London trade Thursday, hitting multi-week lows 2.5% below Tuesday's spike as the UK's Bank of England and the European Central Bank both followed the US Federal Reserve in raising their key interest rates by half-a-percentage point.
Despite all 3 rises being slower than the Fed, ECB and BoE's most recent hikes of 0.75 points, and despite pundits, analysts and traders all expecting half-point moves as delivered, global stock markets also dropped, extending yesterday's late fall on Wall Street and pulling the MSCI World Index down another 0.4%.
"The [Fed] is strongly committed to returning inflation to its 2% objective," said the US central bank in Wednesday's policy statement, raising overnight Dollar rates to a ceiling of 4.50% in the face of 7.1% consumer-price inflation.
"Further increases in Bank Rate may be required for a sustainable return of inflation to target," said the Bank of England this morning after raising UK rates to 3.50% in the face of 10.7% inflation.
"Keeping interest rates at restrictive levels will over time reduce inflation by dampening demand," the 19-nation ECB then said Thursday lunchtime, raising the annual returns paid on commercial-bank deposits to 2.0% in the face of 10.0% inflation.
Two members of the Bank of England voted for no change at 3.0%, and 1 voted for a second 0.75-point hike.
While new forecasts from the US Fed's policy committee now say 2023 will end with short-term Dollar rates at 5.1% per annum, betting in the futures market went the other way overnight, raising the odds of next year finishing with rates at or below today's ceiling of 4.50% at better than 2-in-3, the strongest such reading on the CME's FedWatch tool for more than 2 months. 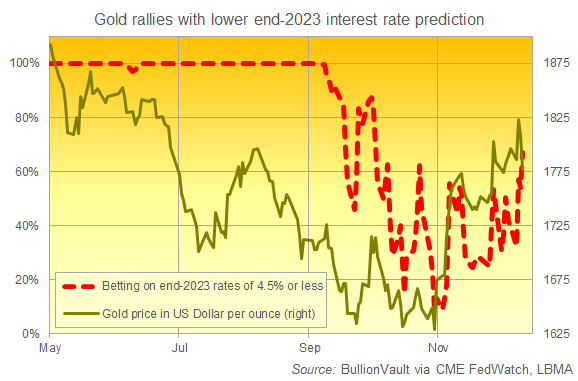 The Dollar rallied a little from yesterday's new 6-month low against the rest of the world's major currencies.
That still left the DXY erasing well over half this year's 20% rise to the 2-decade peak hit in late-September.
Gold bullion dropped to $1775 per ounce, its lowest in more than a week and $50 below Tuesday's 5-month peak following weaker-than-expected US inflation data.
The UK gold price in Pounds per ounce touched 6-week lows beneath £1440 as Sterling rose on the BoE news.
Euro gold bullion prices also hit their lowest since end-October, dropping to €1667 as the EuroStoxx 600 index of the wider region's stock markets lost 1.7%.
"Broadly into 2023," Reuters quotes Singapore bank OCBC's foreign exchange strategist Christopher Wong, "I still favour gold to trade higher.
"But near term into end-year, I won't rule out any profit-taking or pullback in prices."
Wednesday saw giant US-listed gold ETFs the GLD and IAU both shrink in size, while the SLV silver ETF also saw net liquidation by investors, with its number of shares in issue shrinking by 0.4%.
Comex futures and options were also muted, with the daily trading volume in gold derivatives falling by 80% from Tuesday's spike – when gold prices jumped to 5-month highs – on the weaker than expected US inflation data.
Volumes for the other precious metals also fell back to pre-inflation data levels, down 52% in silver futures and options, 18% in platinum and 41% in palladium derivatives.