END_OF_DOCUMENT_TOKEN_TO_BE_REPLACED

GOLD PRICES jumped against a falling Dollar in London trade Friday lunchtime, touching a 1-month high just shy of $1830 per ounce but then dropping back $10 after new US data said the world's largest economy added less than 1/3rd as many jobs as analysts forecast for August.
Non-farm payrolls expanded by only 235,000 on the Bureau of Labor Statistics' first estimate, badly missing predictions of 750,000.
Unemployment however fell faster than expected, down to 5.2%, while average wage growth jumped to 4.3% per year – a series record outside the last 18 months' historic volatility.
New York's stock markets opened the day slightly lower, following Europe in slipping back from last month's run of new all-time record highs after separate data today said retail sales in the 19-nation Euro currency union fell month-on-month in July, with service-sector growth also slowing from the pace of its stellar pandemic bounceback in August on Markit's PMI reports.
Major government bond prices also slipped Friday, edging 10-year US borrowing costs up to 1.33% per annum, the highest weekly close since early July and reversing the retreat seen after last Friday's "dovish" speech on QE tapering from US Fed chairman Jerome Powell.
The Dollar meantime fell to its weakest Euro exchange rate since end-July, helping cap the gold price in Euros €5 below last week's finish of €1540 per ounce. 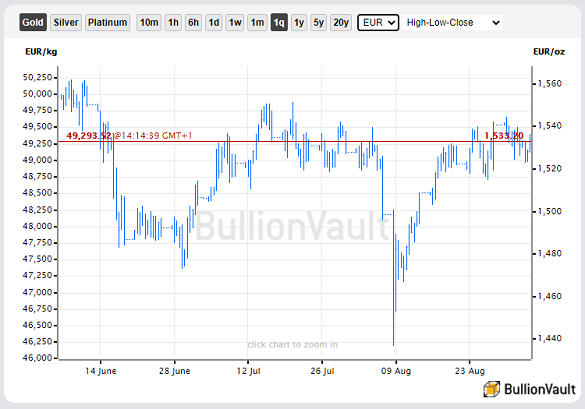 The UK gold price in Pounds per ounce was also unable to regain last Friday's 5-week closing high, trading £3 lighter at £1317.
With the BLS revising July's US jobs growth higher to more than 1 million, "August is also a notoriously difficult month to survey accurately due to vacations," CNBC quotes one analyst.
"[But] today's jobs report reflects a major pullback in employment growth, likely due to the rising impact of the Delta variant of Covid-19 on the economy."
President Joe Biden's approval rating have already fallen to the lowest since he took office, according to a new poll, following the US military's exit from – and the Taliban's retaking of – Afghanistan just before the 20th anniversary of 9/11.
Ahead of the jobs data, the 2 largest US gold-backed ETF trust funds had shrunk for this week so far, with the giant SPDR Gold Trust (NYSEArca: GLD) seeing net liquidation of 0.3%.
The giant iShares Silver ETF (NYSEArca: SLV) also shrank Thursday, but it held on track for the 1st weekly growth in three, expanding by 0.7% from last Friday.
Silver also rose against the falling US Dollar today, like gold prices touching the highest since this time in August with a gain of 1.8% at $24.45 per ounce.
Overnight in Asia "Gold [was] still trading sideways around the 200-day moving average" said one bullion desk earlier today, pointing to what many technical analysts believe to be key support for the precious metal's current price levels around $1810.
Shanghai gold prices meantime showed a premium to London around $3.75 per ounce, stronger from Thursday but less than half the typical pre-Covid incentive for new bullion imports into gold's No.1 consumer nation.
Over in India – the No.2 gold consumer market after China, where prices continue to show a discount to London amid a glut of supply over weak summer demand – the quantity of household debt pledged against jewelry and other gold items has jumped by 77% over the last 12 months according to new data.
Coming on top of the gold loan sector's multi-year surge, and a "sign of distress" as the subcontinent struggles to recover from the spring's Delta wave of the Covid pandemic, the jump is because "People find it easier to get loans by pledging gold," says one bank official to Indian Express.