END_OF_DOCUMENT_TOKEN_TO_BE_REPLACED

GOLD PRICES touched 3-week highs against a weaker US Dollar in London trade Thursday, reaching $1751 per ounce as stock markets rose to fresh record highs after the US Federal Reserve repeated its commitment to zero rates and QE asset purchases to help boost the post-Covid recovery alongside President Biden's massive stimulus spending.
With the Dollar Index retreating again from late-March's 5-month high after the Fed's comments, government bond prices also rallied, helping edge longer-term interest rates further down from their recent spike to multi-year highs.
New data today showed last week's US jobless benefit claims rising faster than expected, suggesting that employers continue to cut staff.
"A combination of lower yields and an offered [ie, weaker] greenback continue to underpin gains to bullion," says a trading note from Swiss refining and finance group MKS Pamp.
"The key $1750-1765 resistance band [is] firmly in play over the near-term, with recent short builds likely to be tested through this area." 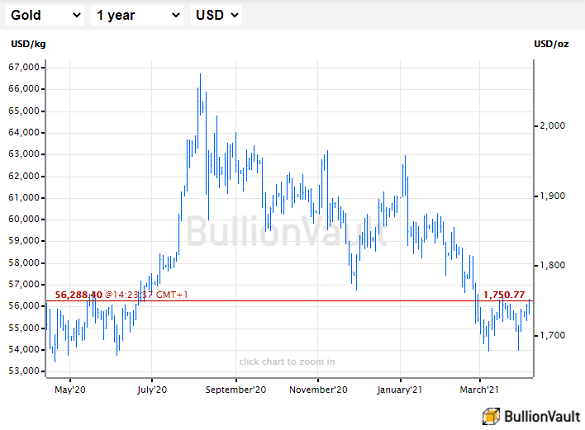 With the Democrat White House now pushing for $2 trillion in new infrastructure spending on top of Biden's $1.9 trn Covid relief bill, the jump in bond yields since New Year "could reflect the outlook for more expansive fiscal policy" more than a fear of inflation, said minutes from the Federal Reserve's mid-March meeting released yesterday.
"A couple of participants [also] expressed concern that highly accommodative financial conditions could lead to excessive risk-taking and the buildup of financial imbalances."
But while betting in some financial markets now says the Fed will start raising its overnight interest rate by the end of 2022, it will "likely be some time until [the central bank's] maximum-employment and price-stability goals would be realized" the minutes conclude, chiming with the Fed's public statements.
US consumers in February borrowed the most in new credit since November 2017, growing their debt outstanding by over $27 billion on a seasonally adjusted basis.
That erased the last of the Covid Crisis' earlier $91bn in net debt repayments by US households.
Global stock markets today rose for the 4th time in a week, setting yet more all-time highs on the MSCI World Index of developed-economy shares.
Raw materials rose 0.3% overall on the UBS/Bloomberg index, with solid gains in agricultural commodities and base metals offsetting a fall in energy costs.
Global food prices rose for the 10th month running in March, reaching June 2014 levels on the United Nations' FAO index.
Copper today held more than 5% below late-February's new 9.5-year high, while US crude oil traded almost 12% below last month's 2-year high.
Silver today rose to 1-week highs at $25.46 per ounce, almost $1.70 above last week's drop to the lowest in 2021 so far after reaching an 8-year high of $30 at the start of February.
Fellow industrial precious-metal platinum meantime struggled $15 per ounce below yesterday's 8-week highs above $1247.
That put platinum prices 8.2% below mid-February's 6.5-year high.
Yesterday's services-sector PMI surveys for March came in stronger than expected across all major economies – albeit continuing to shrink in the 19-nation Eurozone.
Gold priced in Euros meantime rose back towards Easter Weekend levels at 1470 per ounce, like the Dollar price also 16.0% below last August's all-time high, as No.1 economy Germany's Chancellor Merkel backed calls for a national lockdown against the current wave of Covid infections and deaths.
The UK gold price in Pounds per ounce touched a 6-week high at £1273, cutting its discount from 2020's record peak to 19.5%, as health authorities in the rich world's worst Covid-hit major economy confirmed concerns over blood clots in young women receiving the Oxford/AstraZeneca vaccine.