END_OF_DOCUMENT_TOKEN_TO_BE_REPLACED

GOLD PRICES slipped Friday but headed on the last day of March 2017 for a 7.1% gain versus the US Dollar since New Year's Eve.
Rising across the first quarter for the 8th time in the last 10 years, gold prices achieved that in just half of the January-to-March periods over the previous four decades to 2007.
Silver price rose harder still, gaining 11.2% in Dollar terms across the first quarter of 2017 to beat all other major assets except emerging-economy stock markets with a London price of $18.06 per ounce on Friday.
Rupee gold prices in India – the No.2 household buyer – have this week held at a small premium over the global benchmark of London quotes inclusive of 10% import duty, says the Hindustan Times, with demand recovering from 2016's policy-driven slump for the spring Hindu festival of Gudi Padwa.
Gold premiums in Shanghai today slipped below $12 per ounce for the first time since the start of March, but still offered 4 times the typical incentive of the last half-decade to new imports into China – the world's No.1 mining, importing, consumer and central-bank buying nation.
"Asian gold demand fell 22% in 2016," said Cameron Alexander, manager of the region's Precious Metals Demand data at specialist analysts GFMS, now part of the Thomson Reuters group, launching the consultancy's 50th annual Gold Survey today.
"The region accounts for 80% of global consumption, so it is often important to the price."
2016 however saw Western investment demand most notably from large money managers rebound, GFMS explained – a point also stressed at Thursday's launch of the new Gold Focus 2017 from competitor analysts Metals Focus.
With physical fabrication demand for jewelry, retail bars, coins and industrial uses falling 18% in 2016, the GFMS report says, gold prices still rose thanks to exchange-traded trust fund investment and especially speculation in derivatives contracts, where traders bet on the future price rather than buying bullion itself.
Over the last decade, said Alexander, trading volumes in Comex gold futures have gone from just 10% to now 30% of London's wholesale 'over the counter' market in gold bullion. 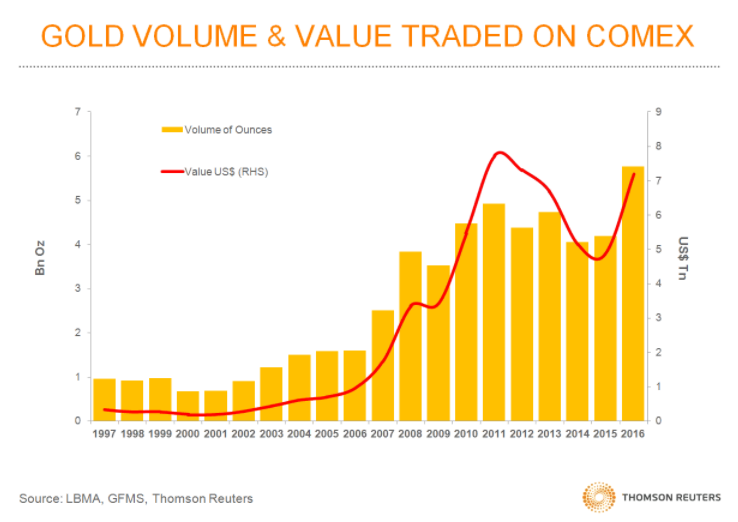 "China's voracious appetite for jewelry" in contrast "was more than sated last year," Alexander went on in today's GFMS presentation, with a change in fashion to lower-carat, higher profit-margin items likely to dent consumption again in 2017.
But "the decline in China's investment bar demand has now likely run its course," he went on.
India's gold demand also looks set to recover from last year's 37% plunge in imports according to GFMS, although the imposition of General Sales Tax in mid-2017 poses a short-term challenge to household buying.
As it is, Alexander said Friday, "Consumers are quite happy to purchase gold at current prices," helped by a stronger Rupee, early forecasts for a good monsoon – key to rural incomes and demand – and economic sentiment as shown by the first-quarter of 2017's sharp gains in India's stockmarket indices.
After gold prices per ounce averaged $1250 across 2016, Thomson Reuters now predicts a 0.9% rise for full-year 2017.
Metals Focus' base case sees an annual average gold price of $1285 but with a possible $1475 high if political or economic stress drives strong new investment demand.
"The [biggest global] risk during the second quarter of this year," says a note from Chinese-owned bullion clearing and market-making bank ICBC Standard, "is that unresolved arguments over deficit spending [mean] the [Trump] administration fails to get any meaningful tax reform or infrastructure spending bills written, let alone passed.
"That would almost certainly lead to the implied probability of another 25bp rate hike in June falling quickly from current levels around 45%. And that in turn would likely give gold prices the impetus to break up through $1300 again."