END_OF_DOCUMENT_TOKEN_TO_BE_REPLACED

GOLD PRICES rallied 0.5% from a 1-month low in London trade Thursday, going into the long Easter Bank Holiday weekend almost 3% below last Friday's finish as global stock markets swooned, and bond prices rose, following new comments from a US Fed policymaker on a possible rate hike ahead.
"The next rate increase may not be far off," 2016 voting member James Bullard of the St.Louis Fed told the New York Association for Business Economics, calling the FOMC's lower growth and inflation forecasts at the March meeting "relatively minor downgrades."
After the FOMC failed to hike as hinted last year until December, but now forecasting 2 further hikes in 2016, "Not following through on a proposed action can damage a policymaker's credibility," Bullard said.
Gold slumped to $1214 this Easter week even as US Treasury yields – against which gold prices often move in opposition – fell to 2-week lows, with 10-year bonds offering just 1.86% annually to new buyers, unchanged from this point in 2015. 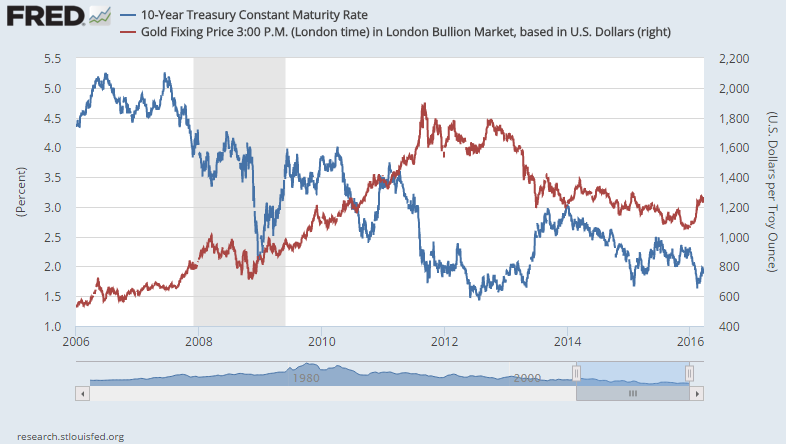 Crude oil lost another 1% after Wednesday's shock data showed US stockpiles swelling 3 times faster than analysts forecast.
European stockmarkets lost 1.5% and more as traders wound down for Good Friday, and the Dollar continued to tick higher against the Euro currency from last week's 1-month lows.
Pushing the single currency below $1.1150, that buoyed the gold price for Eurozone investors above €1090 per ounce.
But that was still 6% beneath the 13-month highs hit in early March, just before the European Central Bank raised its QE money creation scheme to €80 billion per month and cut its deposit rate for commercial lenders to minus 0.4%.
Gold priced in British Pounds meantime slipped 4% from this month's earlier 2.5-year highs above £900 per ounce, holding firmer as Sterling dropped again on the FX market despite stronger UK retail sales data.
"We do not believe further modest rate rises will derail the gold rally," says investment and bullion bank HSBC's precious metals analyst James Steel, "[but] they certainly have the potential to knock gold lower, at least temporarily."
"Gold is starting to benefit from a revival of demand for inflation hedges," reckons London consultancy Capital Economics, claiming that inflows to gold trust-fund products "[are] offsetting at least some of the downside risks from renewed strength in the US Dollar."
Having added almost 180 tonnes so far this year to reach 821 tonnes of bullion backing, the SPDR Gold Trust (NYSEArca:GLD) saw demand for its shares unchanged for a second day running on Wednesday as benchmark prices fell 2.8%.
The giant iShares Silver Trust (NYSEArca:SLV) has shrunk 0.5% from this week's 7-month record as silver prices 3.5%, bottoming overnight at $15.17 per ounce.
That pushed the Gold/Silver Ratio of the two metals' relative prices back above 80, a 7-year high when reached at the start of 2016.
Australian gold miner Newcrest (ASX:NCM) meantime said Thursday it is "hedging" half-a-million ounces (15 tonnes) of the next 2 years' output from its Telfer project – "a large scale, low grade mine [where] profitability and cashflow are both very sensitive to the realised Australian Dollar gold price," according to the company's statement.
2016's rising gold prices to date have seen a quick return to gold miner hedging – a strategy for locking in higher prices by borrowing and selling metal now for delivery against that loan using future production – which peaked at the end of gold's last bear market ending in 2001.
"With the Australian Dollar gold price trading close to 10-year highs," says the world's 7th largest gold mining company's finance chief Gerard Bond, "we saw this as an appropriate moment to lock in the price."