END_OF_DOCUMENT_TOKEN_TO_BE_REPLACED

GOLD PRICE losses of 2.5% from this time last week were erased in Asian and London trade on Tuesday, taking the precious metal back up above $1800 per ounce after it touched 5-month lows in Dollar terms amid yesterday's drop in US stock markets.
Silver prices also bounced, surging 7.3% from what was only a 10-week low in Dollar terms as new data showed speculators remaining far more bullish on the industrial white metal than they were on gold last week.
Hedge funds and other speculators in Comex gold futures and options cut their bullish bets on the yellow metal by 7.9% and grew their bearish bets as a group by 9.2% in the 5 trading sessions ending last Tuesday say figures compiled by US regulator the CFTC.
That pulled the net speculative position of Managed Money traders in gold derivatives down by 14.5% from a week earlier, the sharpest weekly retreat since mid-September, to the smallest since May 2019.
Bullish speculation on Comex silver contracts, in contrast, slipped only 4.2% net of bearish bets to reach just a 2-week low. 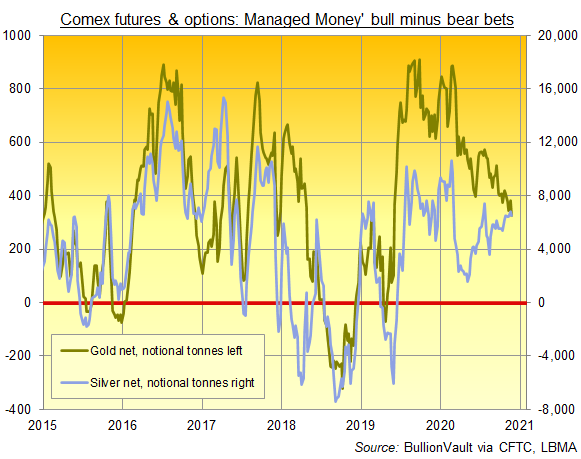 "The largely industrial nature of silver should mean buying is well supported amid the 2021 economic recovery," says a note from head of business development Jonathan Butler at Japanese conglomerate Mitsubishi's precious metals division.
"Tied with still-tight supplies, particularly of high grade silver...the move towards greater solar PV energy uptake under the new US administration bodes well for silver demand, as does the coming roll-out of 5G electronics, together with a resurgent fine chemical sector focused on the manufacture of personal protective equipment as well as anti-microbial applications."
Crude oil meantime slipped $1 per barrel from last week's 8-month high above $48 after a meeting of Opec+ cartel of producer nations broke up without agreement on extending output cuts, a move supported by Saudi Arabia but opposed by Russia.
Saudi Arabia in March flooded European refiners with supply even as the Covid Crisis struck, trying to win market share from Russia but helping drive prices to record lows including a dip below zero.
The theocratic government in Tehran meantime issued photos of 4 people it believes were responsible for the assassination of Iran's leading nuclear scientist, once more blaming Israeli secret services.
Other commodities rose with silver and gold prices Tuesday, and platinum touched its highest price since August – back when gold and silver set their recent highs some 14.4% and 26.2% respectively above current levels – at $992 per ounce.
"Ongoing national lockdowns in Germany, France, the UK, Belgium and several other countries make it difficult to be optimistic for the near-term prospects of the European car market," says Butler at Mitsubishi.
But platinum "has been on an upwards trend" he adds since major miner Anglo American Platinum (JSE: AMS) in early November forecast a loss of one-fifth or more from its 2020 output thanks to the closure of key processing plants for rebuild, repairs and maintenance.
"The resulting build-up of work-in progress inventory is intended to be refined beginning early next year, [but] any delays to this timescale will continue to cause physical tightness in the platinum market at a time when demand may be beginning to recover."
Gold priced in Euros meantime regained all of the previous 2 session's 2.9% plunge after bottoming Monday at the lowest since the start of April at €1473 per ounce.
Down 15.8% from August's record high, that was a new all-time high for gold priced in the single Euro currency when first reached in mid-February.
The UK gold price in Pounds per ounce also reversed all of the plunge starting Friday, surging 2.6% to touch £1358 – trading unchanged from this time last week after hitting its lowest since the start of June – as Sterling fell on the FX market amid a raft of bad news for the UK economy.
With Covid deaths setting the worst weekly total since May, 240-year old High Street and shopping mall store Debenhams is set to collapse, costing 12,000 people their jobs across 124 shops.
After the UK's own government budget watchdog said last week that a 'no deal' Brexit will cut a further 2 percentage points off GDP, on top of the 4% already likely to be lost from leaving the EU at all, the Organisation for Economic Co-operation and Development today warned of "serious additional economic disturbances in the short term" and "a strongly negative effect...in the longer term" if a trade deal isn't reached before 1 January's end to the transition period.
The UK economy is already on track for the deepest 2020 Covid crash of any G20 nation except Argentina the OECD says, revising its 10.1% drop in GDP to an 11.2% fall.