END_OF_DOCUMENT_TOKEN_TO_BE_REPLACED

GOLD PRICES slumped again in Asian and London trade Tuesday, extending yesterday's plunge on news that Jerome Powell will continue as chairman of the US Federal Reserve to reach 3-week lows beneath $1785 per ounce.
The US Dollar edged lower from Monday's fresh 16-month highs against the rest of the world's major currencies, while global stock markets struggled for a 3rd session running after closing Monday at 3-week lows on the MSCI World Index.
Crude oil meantime bounced hard from 2-month lows beneath $75.50 per barrel of WTI despite President Biden saying the US will release 50 million barrels from its Strategic Petroleum Reserve, aiming to boost market supply and reduce prices in action taken alongside China, India, Japan, South Korea and the UK – all signatories to promises on reducing fossil-fuel use at this month's COP26 climate-change summit.
Like gold, silver prices also slumped again Tuesday as global PMI business surveys said activity in both manufacturing and services is expanding quickly this month, bottoming fully $2 per ounce below last week's 3-month high of $25.40.
With Powell preferred by the Biden White House to the "slightly more dovish" Lael Brainard – now nominated for Fed vice chair instead – gold prices have lost $90 per ounce from their 5-month high touched last Tuesday following news that the worst US consumer-price inflation in 3 decades had driven real interest rates on cash-in-the-bank to new all-time record lows.
That's the fastest 1-week fall since mid-June.
"Silly dips should be capitalized on," says a precious metals trading note from Swiss refining and finance group MKS Pamp.
"[This] is one of the most bullish macro backdrops for gold [because] the combination of Powell as Chair and Brainard as Vice Chair is still incredibly dovish senior leadership.
"But algos [ie, pre-programmed trading bots] don't trade longer-term views, and the persistent churn, given a relentless US Dollar and US yields rally, put undue pressure on precious (and other
commodity) prices."
Ten-year yields on US Treasury debt – a benchmark for borrowing costs across the world's largest economy – jumped by 9 basis points yesterday, the fastest move in almost 2 weeks.
Yields on inflation-protected TIPS bonds jumped faster still, rising from minus 1.11% to minus 0.98% on 10-year debt with the fastest 1-day rise since late-February. 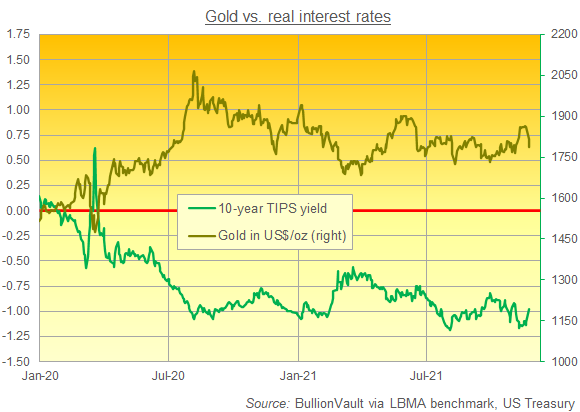 Because TIPS yields imply the outlook for real interest rates on cash, they typically show a strongly negative correlation with gold prices.
So far in 2021 that correlation has averaged 36.3% on the r-squared coefficient, up from 32.8% across the previous 3 years.
With CPI inflation now at 6.2% – the worst since 1990 – while the Fed Funds rate remains at 0.1%, "We know that high inflation takes a toll on families," said Powell on Monday, speaking alongside Brainard and Biden following the President's nominations for their Fed leadership in 2022.
"We will use our tools both to support the economy – a strong labor market – and to prevent higher inflation from becoming entrenched."
"Putting working Americans at the center of my efforts" Brainard added, "means getting inflation down at a time when people are focused on their jobs and how far their paychecks will go."
Like Powell, Brainard has repeatedly called 2021's surge of inflation "transitory", urging against tightening monetary policy too soon as the Covid Crisis recedes.
Powell in late-2018 led the Fed to raise its overnight borrowing rate above the pace of inflation – then at 1.7% per year – for the 1st time since 2005, eve of the subprime housing crash and global financial crisis.
Six months later, US interest rates showed a "yield curve inversion", with longer-term borrowing costs falling below short-term rates to signal a recession ahead almost 12 months before the Covid Crisis hit America.
Betting on US interest-rate futures contracts now puts the odds of the Fed keeping its key interest rate at 0.1% by the end of next May at evens, down from a 100% certainty as recently as mid-September.
The odds of no change by next June have slumped to barely 1-in-5 the CME derivatives exchange's FedWatch tool also says, crashing from above 80% at the start of last month.