END_OF_DOCUMENT_TOKEN_TO_BE_REPLACED

GOLD PRICES eased from near 3-month Dollar highs on Monday as the US currency rallied from last week's slump and bond yields also bounced as a senior Fed official said the US central bank's rate-hiking cycle isn't finished, writes Atsuko Whitehouse at BullionVault.
So-called 'stablecoin' Tether meantime held below its $1 peg, albeit higher from last week's 3% discount, while original crypto-currency Bitcoin lost a brief rally above $17,000 as the implosion of trading platform FTX flipped into accusations of outright theft and fraud.
"FTX's implosion is a loss of confidence for the crypto ecosystem and boosts the appeal of real assets," says bullion refining and finance group MKS Pamp's market strategist Nicky Shiels, pointing to last week's surge in gold prices.
"But there is just no pleasure in anyone's misfortune as there's real wealth destruction with real pain out there." 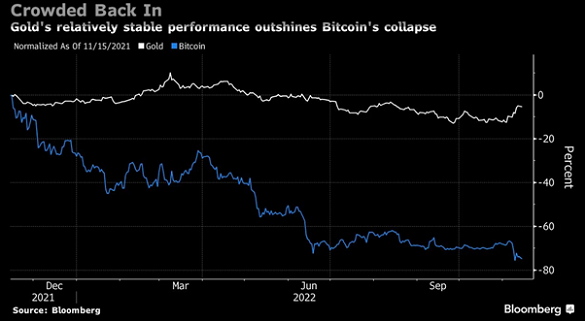 The spot gold price in US Dollar terms on Monday retreated 0.7% to $1760 per ounce after posting a gain of 5.1% for the week to the highest Friday close since mid-August.
Mirroring that move, the Dollar index – a measure of the US currency's value versus its major peers –rose 0.8% after losing over 4% last week to its lowest since mid-August on the back of softer-than-expected US October consumer price index data released Thursday, which fuelled expectations that the Federal Reserve may slow the pace of its interest-rate hikes.
"We're not softening...Quit paying attention to the pace and start paying attention to where the endpoint is going to be," Federal Reserve governor Christopher Waller told a conference organized by Swiss bank UBS in Sydney, Australia today.
"Until we get inflation down, that endpoint is still a ways out there."
Ten-year US Treasury yields – a benchmark rate for government as well as many finance and commercial borrowing cost – edged higher to 3.87% after posting the biggest 1-day drop in at least 13 years last Thursday.
The odds of a 75 basis-point hike in December suggested by betting on US interest-rate futures dropped further to 17% today from 48% before the inflation data was released, with a 50 basis-point hike now given an 80% probability according to the CME's FedWatch tool.
Despite last week's steep rally in stocks, bonds and bullion, it marked another 23% plunge in Bitcoin, now down 75% from its all-time high of a year ago at $68,000.
Forecasting back then a possible long-term price of $146,000, investment bank J.P.Morgan's strategist Nikolaos Panigirtzoglou now says it could drop to $13,000.
"What's become clear is [cryptocurrency] will not find a home in institutional asset allocation," Bloomberg quotes Hani Redha, a multi-asset portfolio manager at Pinebridge Investments in London.
"There was a period when it was being considered as a potential asset class that every investor should have in their strategic asset allocation and that's off the table entirely."
At least $1 billion of customer funds have vanished from collapsed crypto exchange FTX, Reuters reported on Saturday.
The exchange's founder Sam Bankman-Fried also transferred $10 billion of customer funds from FTX to his trading company Alameda Research said the report.
Crypto exchange FTX filed for US bankruptcy protection last Friday, after a week of turmoil.
With European stock markets rising again Monday, gold priced in Euros edged lower to €1707, still near 4-week highs, while the UK gold price in Pounds per ounce slipped 0.5% to £1495.
Asian equities had also risen further overnight ahead of China's leader Xi Jinping meeting US President Joe Biden for their first face-to-face talks, held in Bali, Indonesia ahead of the G20 summit.