END_OF_DOCUMENT_TOKEN_TO_BE_REPLACED

GOLD PRICES spiked after extended this week's uptrend in Asian and London trade Friday, jumping $15 per ounce to break above $1800 for the first time in 5 weeks as global stock markets rose despite surging energy costs and inflation forecasts.
"Treasury Traders' 5-Year Inflation Expectations Top 3%," says a headline at Bloomberg, pointing to breakeven rates in the US bond market setting new series highs.
"Winter Crisis Raises Prospect of Energy Blockades in Europe," says another, with some of the region's politicians openly discussing export bans on fuel as energy and power prices surge yet again.
"UK inflation likely to hit 5%, warns Bank of England chief economist," says a BBC headline, quoting Huw Pill's comment to the Financial Times.
Silver prices had earlier outpaced gold once more on Friday, setting the highest midday price in London's wholesale bullion market for more than 6 weeks at $24.30 per ounce.
Unlike the last two weeks' big spikes to this level in gold, first on weak jobs data and then on inflation surging, Friday's peak came after spot prices rose every day since Monday and without any 'shock' impetus from US economic data.
New figures today showed Japan's 'core' cost of living index falling 0.5% over the 12 months to September, a steeper deflation than analysts had forecast for the world's 3rd largest national economy.
Retail sales in the UK – the world's 5th largest economy – also missed expectations for last month, contracting 2.6% per year when fuel is excluded.
'First flash' survey results from data agency IHS Markit meantime said October has so far seen services-sector activity across the 19-nation Eurozone expand at its slowest pace since April, outpaced once more by strong manufacturing growth.
"Data warns of stagflation," says analysis from the mining industry's World Gold Council, noting how after "a rampant first half in 2021, economic growth may be rolling over in the US and elsewhere.
"But inflation remains a lingering, if not growing, concern...[and while] gold hasn't benefited from record-low real [interest] rates and high inflation in 2021, we believe this has to do with rosy expectations about inflation, growth and equities." 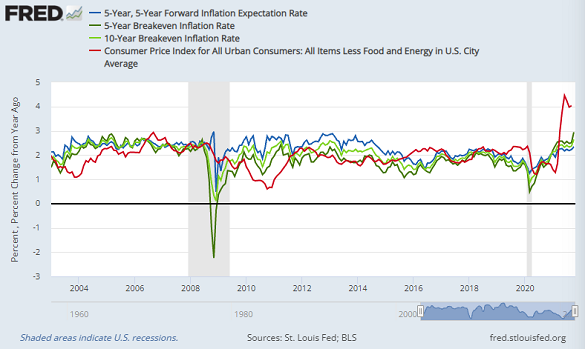 So-called 'breakeven' inflation implied by prices in the US bond market today set another fresh series record of 3.00% per annum on 5-year notes and a 15-year high of 2.68% on 10-year debt.
The more respected "5 over 5" measure last Friday peaked at 2.41% before edging back this week, giving the highest such forecast for 5-year inflation starting 5 years from now since October 2014.
US consumer-price inflation ran at 4.0% per year in September when 'volatile' fuel and food are excluded – more than twice the average pace of the decade ending last New Year's Eve.
Like the 5-Year, 5-Year forward rate, US crude oil prices also hit fresh 7-year highs around last weekend before dropping $1.50 per barrel from that peak before rallying back above $83 today.
European government bond prices fell yet again, edging longer-term borrowing costs up to fresh 5-month highs for France, Italy and Spain while the 10-year Bund yield for Germany – the Eurozone's largest economy – touched its highest since May 2019 at minus 0.07% per annum.
Natural gas prices fell for a 2nd day running to the cheapest in a week, down almost 25% from early October's fresh all-time highs.
Brent crude flattened just below yesterday's attempt at breaking to 7-year highs above $86 per barrel, but wholesale electricity costs for tomorrow leapt as temperatures fell across Europe, tripling from Thursday's rate for Nordic suppliers according to data from the Nord Pool power market.
With gold prices for US Dollar investors hitting $1806, the price in Euros matched last Friday's 4-month high at €1552, while the UK gold price in Pounds per ounce leapt to show its 1st weekly gain in 4 at £1310.