END_OF_DOCUMENT_TOKEN_TO_BE_REPLACED

GOLD PRICES rose against a falling Dollar on Tuesday after weaker-than-expected US inflation data dented expectations that the Federal Reserve will start tapering its $120 billion-per-month of new quantitative easing at next week's policy meeting.
Gold rose almost $20 per ounce to briefly breach the $1800 mark after the headline consumer-price index came in 0.3% higher for August from July, slower than most analysts predicted, led by a 2.8% jump in gasoline costs.
Gold prices then fell back $10 but crude oil rose further, reaching 6-week highs at $74 per barrel of European benchmark Brent.
Natural gas prices in both the UK and the Netherlands meantime  set fresh all-time highs yet again, driving wholesale electricity prices up to new record highs once more, amid muted wind-power generation.
Excluding volatile fuel and food prices, so-called 'core' inflation in the US last month came in at 4.0% per year, also below Wall Street consensus and half-a-point below June's 3-decade high.
Month-on-month, core CPI rose barely 0.1% in August, the slowest pace since February and slower by two-fifths from the 21st Century's pre-Covid average. 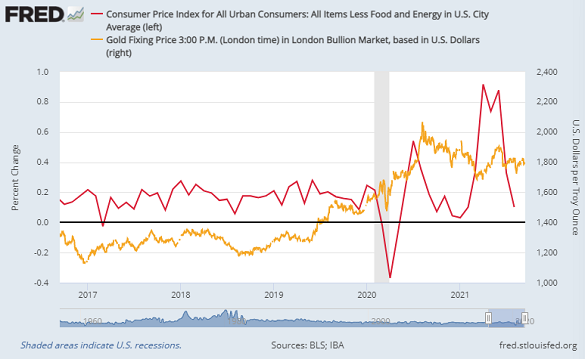 "My baseline forecast is still to have inflation around 4% this year," said Philadelphia Fed chief Patrick Harker to Japan's Nikkei Business in an interview published yesterday, "starting to fall back to 2% over the years 2022 and 2023.
"However, I do see elevated risk that inflation could run higher," said Harker – a non-voting member of the Fed's FOMC policy team this year.
"I'd like to start the taper process soon, so that we can finish the tapering process, so if we need to increase the policy rate, we have the room to do that.
"I think we need to buy ourselves that option."
With gold priced in Dollars up 0.5% for the week so far, the Euro gold price rose 0.2% to €1518 and the UK gold price in Pounds per ounce held flat at £1293.
Ahead of today's data – widely seen as a key influence on next week's Fed tapering decision and economic forecasts – the giant GLD gold-backed ETF investment trust saw its first net inflow of investor cash since end-July.
The smaller IAU gold ETF also expanded by 0.2%, growing for the first time this month.
Gold prices in China – the metal's No.1 consumer market – today rose to $5 per ounce above global quotes, around half the usual premium offered to new imports of bullion, as the Yuan reached its highest Dollar exchange-rate in 3 months.
Hong Kong and mainland China equities fell 1.2% and 1.5% respectively meantime as giant property developer and real-estate investment firm Evergrande – which saw hundreds of police blockade angry creditors and customers outside its head office Monday – appointed Hong Kong and US advisors known for debt restructuring.
"[That's] basically announcing the restructuring of all of its outstanding debts," according to one Singapore-based analyst – something Evergrande flatly denied as late as Monday night, calling rumors of such a move "totally untrue".
Dropping 12% in Hong Kong trade today, Evergrande (HKG: 3333) now has a stock-market value of US$5.1 billion but debts and obligations totalling $310bn, including to buyers now awaiting the completion of 1.4 million new properties.
Beijing's Communist dictatorship has this year added a renewed crackdown on real-estate speculation and leveraged debt to its campaign against outspoken tech companies, commodities "hoarding" and crypto-currency trading.
Last month saw the demolition in Kunming, south-western China, of 15 skyscrapers – worth perhaps $150m – left unfinished since its developer went bust in 2013.