END_OF_DOCUMENT_TOKEN_TO_BE_REPLACED

GOLD PRICES edged higher from 2-week low as traders adjust their bets on Fed rate hike in September after weighing minutes from the Federal Reserve’s July meeting, while European inflation in July achieved the highest rate since the eurozone began in 1997, writes Atsuko Whitehouse at BullionVault.

The odds of a 75 basis-point hike in September dropped to 36.5% today from 52% before the minutes were released, with a 50 basis-point hike now likely with an over 60% probability, according to the CME's FedWatch tool. 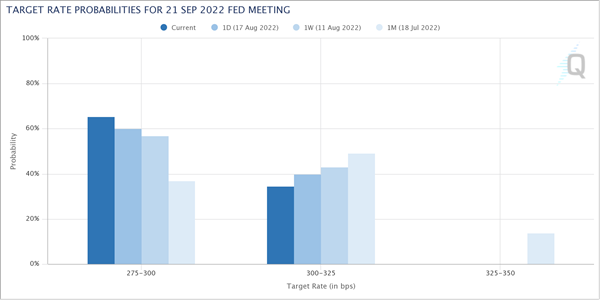 “As the stance of monetary policy tightened further, it likely would become appropriate at some point to slow the pace of policy rate increases while assessing the effects of cumulative policy adjustments on economic activity and inflation,” stated minutes of the Federal Open Markets Committee’s July 26 – 27 meeting released last night.

“Perhaps significantly, ‘many participants’ were concerned about the risk that the Committee could over-tighten because of the long and variable lags between policy shifts and the economic outcome,” noted Rhona O’Connell at brokerage Stone X Group Inc in her latest report.

“This could be taken as a hint that September will hike by 50 basis-point rather than 75.”

Spot gold edged 0.3% higher to $1770 per ounce after declining 3 sessions in a row and hitting the lowest since 3rd August during the previous session, as US dollar and US bond yields rose with minutes warned that the central bank could move to a more restrictive monetary policy to fight inflation.

“With inflation remaining well above the Committee’s objective, participants judged that moving to a restrictive stance of policy was required to meet the Committee’s legislative mandate to promote maximum employment and price stability,” said the minutes.

The Dollar index – a measure of the US currency's value versus its major peers – resumed its climb last night after declining with a slower-than-expected rise in US inflation data last Wednesday.  The greenback rose further today to a three-week high.

Two-year treasury yields, highly sensitive to rate change, rose to two-month high of 3.28% after the minutes were released, while Ten-year US Treasury yields – a measure of the US currency's value versus its major peers – rose to 2.90%, a one-month high.  Both treasury yields edged lower Thursday morning.

Fed officials raised their benchmark interest rate by 75 basis-points at that meeting for a second straight month to the target range of 2.25% to 2.5%, marking the fastest pace of tightening since the early 1980s, when inflation rose as high as 14.6%.

Eurozone’s inflation surged to 8.9% in July on an annualized basis, rising from 8.6% in June, according to Eurostat’s final reading published today.  It is the highest since recordkeeping for the eurozone began 1997.

“It would be more painful to let inflation continue,” Kazaks, who heads Latvia’s central bank, also said, pointing to above 20% inflation in Latvia.

At its last meeting in July the European Central Bank (ECB) raised interest rates to 0% for the first time since 2011 to tackle eurozone inflation.

Norway’s central bank lifted its benchmark interest rate on Thursday by half a percentage point to 1.75%, returning to a level not seen since March 2012.

Meanwhile, the UK’s rate of inflation jumped to 10.1% in July, the first time it has registered a double-digit annual increase in more than four decades, according to data published by the Office for National Statistics yesterday.

The UK’s inflation rate is higher than any other G7 country and most European nations.

The Bank of England expects the rate of inflation to rise to more than 13% in the final quarter of this year and stay high through most of 2023.

Gold priced in Euros edged higher Thursday up 0.4% to €1740, while the UK gold price in Pounds per ounce held unchanged from the previous day at £1467.

European shares and US stock futures were muted on Thursday as Europe’s Stoxx 600 index traded up 0.1% and US equity index futures declined.

The next big event investors are waiting for is the annual monetary policy symposium at Jackson Hole, Wyoming during 25-27 August.