END_OF_DOCUMENT_TOKEN_TO_BE_REPLACED

GOLD PRICES rose on Monday, extending the 3rd weekly advance in a row after speculators in Comex futures and options cut their bearish betting against the precious metal but gold ETFs continued to shrink as traders backed another aggressive rate hike from the US Federal Reserve in September, writes Atsuko Whitehouse at BullionVault.
Silver prices rose faster still, nearing last week's 1-month highs above $20.40 per ounce.
Gold priced in the Dollar rose to $1785 per ounce, peaking $10 per ounce below Friday's 1-month high, made just before strong US jobs and wages data sent the US currency higher, pushing the Dollar gold and silver price down.
Latest data show that hedge funds and other leveraged speculators in Comex futures and options trimmed their bearish bets against both gold and silver last week, but remained net bearish overall as a group on the more industrial gray metal.
On gold, the so-called Managed Money category cut its bearish betting by 28% in the week-ending 2nd August, and raised its bullish betting by almost 7%.
Overall, that turned the net position of Managed Money traders back to net long on gold from the first net short since April 2019, with a notional weight of "about 120 tonnes of gold bought on the Comex in one week," notes Bruce Ikemizu, chief director of the Japan Bullion Market Association, in the latest note.
That category's gross bearish positions however are still 47% bigger than their past 5-year average, while their bullish positions are 37% below average. 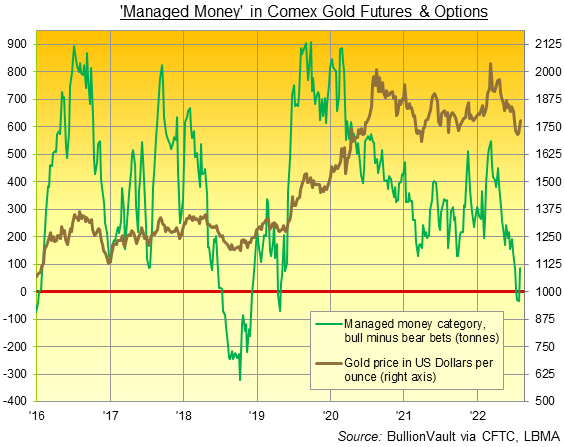 The latest data compiled by regulator the Commodity Futures Trading Commission (CFTC) shows reportable positions as of last Tuesday.
"Gold hit a recent high of $1795 per ounce late last week, and more short-covering was probably seen based on falling open interest with rising prices," says John Reade, chief market strategist at the mining industry's World Gold Council.
Ahead of last week's gold price spike, the total number of Comex gold future and option contracts open across the market had reduced for 3 weeks in a row.
Investors as a group meantime continued to cut the size of giant gold-backed ETF the SPDR Gold Trust (NYSEArca: GLD) on Friday, with the fund liquidating 1.2% of bullion following the strong non-farm payrolls report for July to reach its smallest size since mid- January at 999 tonnes.
That saw the GLD gold ETF resume the 6-week liquidation it paused at end July.
The smaller iShares gold product (NYSEArca: IAU) also shrank last week as shareholder selling outweighed new buying, down to the smallest since mid-February with its 10th  consecutive weekly outflow.
Looking ahead to next month's US Fed policy decision, traders have flipped back to pricing in about a 2-in-3 chance of a third consecutive hike of 75 basis points according to the CME's FedWatch tool, reversing the 'dovish' retreat seen as widening recession fears preceded Friday's jobs data.
Sunday saw the US Senate pass President Joe Biden's latest economic package, with the $430 billion plan called the largest investment in fighting climate change ever made in the US by his fellow Democrats.
Opposition Republicans argued it won't cut inflation from 4-decade highs, and will require tax rises which could take the world's largest economy into recession.
China meantime announced new military drills on Monday in the seas and airspace around Taiwan – which Beijing sees as a break-away region rather than an independent nation – following last week's visit by 2nd-in-line to the US presidency Nancy Pelosi.