END_OF_DOCUMENT_TOKEN_TO_BE_REPLACED

GOLD PRICES erased most of this week's previous $30 drop in Asian and London trade Thursday, rallying to $1778 per ounce even as the US Dollar rose amid a raft of strong global economic and inflationary data.
New bullion-bank rules for gold trading are meantime being reviewed, said industry association the LBMA, which has lobbied regulators over the disruption, loss of liquidity and higher dealing costs threatened by the Basel 3 update and the 85% haircut currently recommended for unallocated gold positions' NSFR.
On the data front – and a day ahead of June's official US non-farm payrolls estimate – new claims for jobless benefit payments came in sharply below analyst forecasts for last week, while the number of job layoffs fell to the lowest since 2000 "as companies held on to their workers amid labor shortages" says Reuters.
Manufacturing across the 19-nation Eurozone meantime saw a record jump in activity last month, as "Production increases sharply whilst jobs growth hits survey peak," according to the Markit PMI survey.
"Prices rise at record rates as supply-side constraints persist."
China drove the first-half of 2020's jump in commodity and especially base-metal prices, says Saad Rahim, chief economist at raw materials trading giant Trafigura, speaking to MarketWatch.
"Now it is US and EU-intensive, it is services-intensive and oil intensive.”
Questioning the need for further US quantitative-easing bond buying of $120 billion per month, "These purchases are very adept at stimulating demand," said Federal Reserve Bank of Dallas President Robert Kaplan – a non-voting policymaker in 2021 – to Bloomberg overnight.
"[But now] we've got plenty of [economic] demand, our problem is supply.
"As soon as we can get substantial further [economic] progress, it'll be healthier to wean off these purchases." 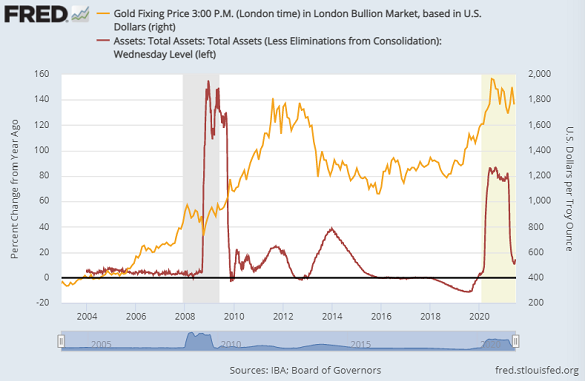 Quantitative easing by the US Federal Reserve slowed by end-June to its weakest annual pace since end-2019, eve of the Covid pandemic, expanding the central bank's holdings of mortgage-backed bonds and government debt by 14.4% from the middle of 2020.
Gold prices ended June with the worst 1-month drop since Donald Trump won the White House in 2016, cutting their quarterly bounce to 4.2%, barely half the gain made by the S&P500 index of US-listed corporations and far behind the 18% rise in crude oil prices.
Crude oil rose again Thursday, hitting new 3-year highs as the Opec+ cartel of producer nations met to discuss maintaining the output cuts agreed during last year's Covid Crisis, when US oil prices briefly went negative amid a glut of supply amid collapsing demand.
Gold's wholesale market in contrast showed strong and deep liquidity in 2020's Covid Crisis, and so the European Union is now formally reviewing the proposed 85% NSFR haircut for banks trading unallocated positions in the precious metal, said Ruth Crowell, chief executive of the London Bullion Market Association, to LBMA members attending this year's annual general meeting online on Thursday.
The European Banking Authority is also meeting to discuss the Basel III rules again, and "this is also happening in the UK," said Crowell, with "real questions being asked" of the haircut, implemented for European banks from Monday this week and due to affect London-based operations from New Year 2022.
"The quantitative evidence suggests that in a liquidity crisis gold acts as an extremely liquid asset," said the LBMA in a joint representation with the mining industry's World Gold Council to UK central bank the Bank of England's Prudential Regulatory Authority in May.
The current NSFR haircuts – part of the Basel 3 framework and under which a bank can count only 15% of the value of any gold held on its balancesheet against a client's unallocated position as part of its regulatory net stable funding requirement, forcing it to set aside extra cash for the additional 85% – "fail to take into account the damaging effect that the rules will have on the precious metals clearing and settlement system, potentially undermining the system completely, and on the increased costs of financing precious metals production."
Turkey's central bank today raised the amount of Lira that commercial banks have to hold against client deposits of foreign currencies in a bid to boost its currency, now down 14% versus the Dollar so far in 2021 after falling 20% last year, with inflation reaching 2019 level near 17% per annum.
The world's No.5 consumers of gold, "Turks have flocked to hard currencies in recent years," says Reuters, with the value of forex and precious metals held in deposit accounts currently just US$10 billion below January's record high of $236bn.
Leaders of Turkey's CHP opposition party – who today launched proposals for a new constitution making the role of president non-partisan – may lose immunity from prosecution under a request made to the courts by current ruling party the AKP's President Recep Tayyip Erdoğan, who also took the country out of the 2011 Istanbul Convention seeking to prevent violence against women.