END_OF_DOCUMENT_TOKEN_TO_BE_REPLACED

GOLD PRICES struggled to bounce from last week's $100 plunge in London trade Monday, holding below $1780 as Western stock markets rallied with commodity prices after falling on the US Federal Reserve signalling that interest rates may rise from zero earlier than previously forecast due to rising inflation.
" None of this really impacts what people are going to be doing the next six months," CNBC quotes one financial advisor after the Fed again called inflation "transitory" but suggested in its latest forecasts that a growing number of policymakers would like to raise rates before 2023.
"For most clients, candidly, it's not that big a deal."
"The fall-out last week was a gross over-reaction," says Rhona O'Connell at brokerage StoneX of the plunge in gold and silver prices.
"For the time being the Fed is still only looking at a 50‑basis point rise – and in 2023. It's hardly a heavy shift to the hawkish side."
The Dollar retreated Monday from new 10-week highs on the currency market, helping curb the gold price bounce to £1280 per ounce for UK investors and below €1500 in terms of the Euro.
US Treasury bond yields rallied but inflation expectations bounced harder, pulling the real rate of interest on inflation-protected TIPS down to -0.80% per annum.
Friday saw 10-year inflation forecasts in the bond market fall to their lowest in almost 15 weeks at 2.24% per annum.
Now falling 0.3 percentage points from mid-May's 8-year high, Friday also marked the 5th week running that 10-year breakeven rates dropped, the longest stretch of falling inflation expectations since the Covid Crash hit all financial markets in February 2020. 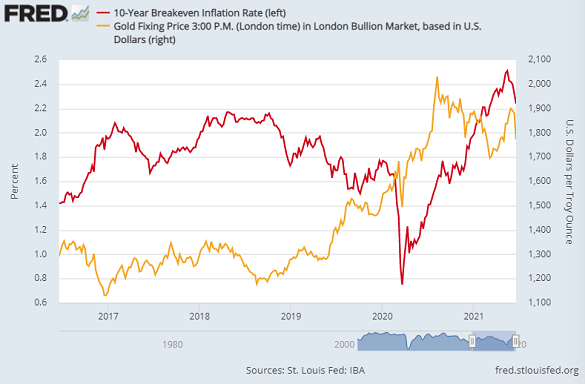 "The Fed is driving the narrative that they will be proactive and not behind the inflation curve," says Nicky Shiels, now group head of metals strategy at Swiss refining and finance group MKS Pamp, in her latest gold price analysis.
"Plus, they have just proven that they can simply talk inflation down with rhetoric."
Copper prices bounced Monday from last week's 2-month lows but held 15% below early May's new all-time highs.
Corn in contrast slid another 2.2% today after hitting 9-year highs in May.
"I can still see a lot of inflationary pressures in the supply chain, and the reality is that it's going up," reckons Michael Widmer at US financial services group Bank of America Merrill Lynch.
"We're certainly seeing a mini supercycle," the Financial Times quotes David Mattiske, CEO of Canadian grain-handler Viterra, "a demand driven environment with the themes of growing population, growing wealth, people consuming more."
For crude oil however, "I think it's my job, and others' jobs, to make sure this super-cycle doesn't happen," says Prince Abdulaziz bin Salman, minister of energy in No.1 oil producer Saudi Arabia, warning against speculative bulls while also conceding that prices may continue to rise due to a "lack of investing" in new capacity.
"Gold's floor remains nearby," Shiels at MKS Pamp goes on, "as outflows [from ETFs] are largely behind us.
"[But] remain vigilant...as prices are now more sensitive to how US data unfolds in the leadup to Jackson Hole," the Federal Reserve's late-summer conference where Fed chiefs have often chosen to outline changes in policy direction in the past.
Giant gold-backed ETF the SPDR Gold Trust (NYSEArca: GLD) increased 1.1% on Friday as bullion prices tried but failed to bounce from 7-week lows.
The MSCI World Index of global stock markets meantime ended last week 1.9% lower, the first weekly loss in over a month and the steepest drop since mid-February.
Silver on Monday also struggled to rally with gold prices, regaining but then losing the $26 per ounce level.
Last week's plunge in the gold price has spurred some Asian-market bargain hunting, Reuters reports, with Chinese prices holding again above London quotes on Monday but No.2 consumer market India continuing to trade at a discount reflecting a glut of local supply over demand.