END_OF_DOCUMENT_TOKEN_TO_BE_REPLACED

GOLD PRICES popped to a 4-session high at $1277 per ounce Wednesday lunchtime in London as the US Dollar sank ahead of the Federal Reserve's long-expected June interest-rate decision following weaker-than-forecast economic data.
US retail sales fell in May, down 0.3% from April to defy analyst predictions of a slight rise.
Consumer price inflation also slowed, pulling the official index 0.1% lower month-on-month with the cost of living rising 1.9% per year against 2.0% forecast.
Silver also rose as gold prices jumped almost 1%, regaining the week's previous 2.8% drop to trade at $17.24 per ounce.
World equities rose after New York set new all-time record highs overnight, while the Dollar fell hard against the Euro on the FX market, with the single currency nearing early June's 7-month highs above $1.12 to the greenback.
US media meantime reported that senior Republican politician Steve Scalise and several aides were shot while practising baseball in Washington, DC.
"Right from the first rate hike in December 2015 the Dollar has largely ignored the [Fed's] rate increases," says today's FX note from strategist Steven Barrow at Chinese-owned currency, commodities and bullion market-maker ICBC Standard Bank. 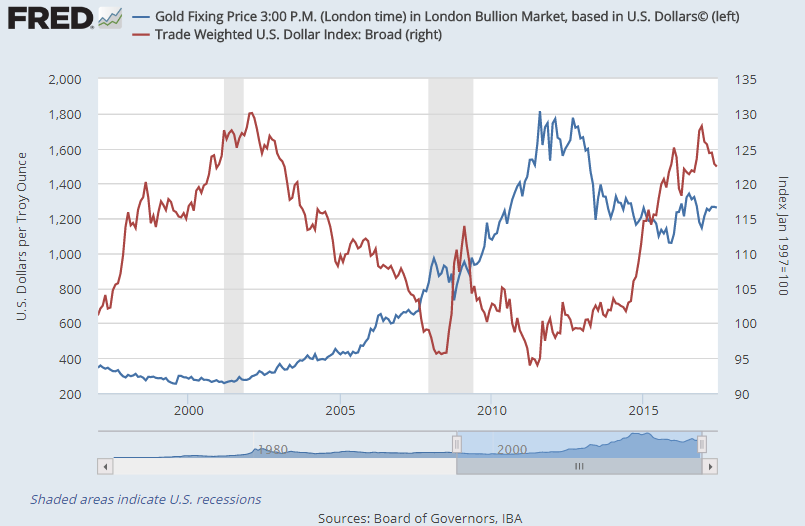 Recalling the 'Taper Tantrum' of 2013 and then the delayed start to Fed rate hikes throughout 2014-2015, "The point at which monetary policy is most effective in lifting a currency is when the [central] bank is building up to rate hikes," Barrow explains, " not when the rate hikes actually occur."
With the US Fed now "constrained" from surprising the market both by investor expectations and by weakening inflation data, "Other central banks that are in the very early stages of readying the market for higher policy rates," Barrow adds, naming the European Central Bank in particular.
"[The ECB] will have to signal bond tapering, possibly undo other easing measures and, at a later stage, start to hint about future rate hikes. This process could take up to two years, but it may well be a two-year period through which the Euro rises...to $1.30 against the Dollar."
The single currency's only climb from $1.12 to $1.30 since the Euro was launched at the turn of the millennium began in May 2003 and took 18 months.
Gold priced in Dollars rose almost 31% over that period, rising from $340 to $445 per ounce.
Gold priced in Euros also rose, gaining 12.5%.
Wednesday saw the gold price per kilo rise near €36,450 for Euro investors, still some 7% below April's 8-month high, reached just before new president Emmanuel Macron beat anti-Euro, anti-immigrant contender Marine Le Pen for the Élysée Palace.
"The gold price has recently moved largely along with EUR-USD exchange rate," says a precious metals 'spotlight' from German financial group Commerzbank's commodities analysts, forecasting that "investment demand will increase...[as] political uncertainty will remain high [plus] equity markets still flying high [meaning] caution is also warranted" amongst portfolio managers.
Dollar-gold's daily correlation with Euro/Dollar in fact slipped Wednesday to 2-week lows at 0.84 on a rolling 1-month basis.
It has consistently shown a greater connection with the broad Dollar Index (measuring the US currency against a basket of other currencies) and with the Japanese Yen, both over the last 10 years and more recently.

Betting on US interest rates today put a 99.6% chance on the Fed raising at this June meeting.
Odds that the Fed will then stick with a ceiling of 1.25% until at least the end of 2017 however rose above 1-in-2, up from just 2-in-5 according to the CME's FedWatch tool this time a month ago.
Longer-term US interest rates also retreated ahead of the Fed decision on Wednesday, pulling the 10-year Treasury bond yield down to 2.16%, near its lowest level since Donald Trump won the US presidential election in November.