END_OF_DOCUMENT_TOKEN_TO_BE_REPLACED

GOLD PRICES jumped in late London trade Friday, rising to $1880 per ounce as the Dollar fell following worse-than-expected US jobs data.
Non-farm payrolls grew by 559,000 in May, said the Bureau of Labor Statistics' first estimate – twice the addition in April but 14% below analyst forecasts.
Western stock markets struggled for a second day but commodity markets rallied as longer-term interest rates fell back in the bond market.
Gold prices had fallen overnight to $1856 per ounce, down 3.1% from Monday's new 5-month high.
Friday's US jobs data saw real interest rates on 10-year inflation-protected US Treasury bonds fall to minus 0.81% after rising Thursday to minus 0.79% per annum, their least negative in almost 2 weeks.
Gold and 10-year TIPS yields have shown a strongly negative correlation of -0.87 on rolling 52-week data across the last 5 years.
That gives an r-squared of more than 75%, showing almost as strong a connection between gold and real rates as between gold and silver prices. 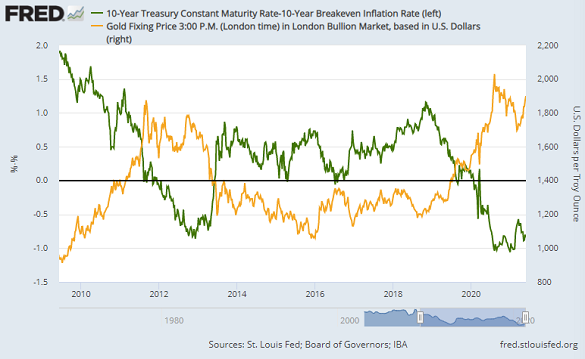 High gold prices and strong investor appetite for new stock-market listings have enticed Russia's wealthiest citizen, Alexey Mordashov, to float his gold-mining giant Nordgold in London reports the UK media, with a projected value of £3.5 billion ($5.0bn).
Russia's state-owned National Wealth Fund said yesterday it is cutting all US Dollar holdings from its $185bn portfolio – built from oil-tax revenues and counted as part of Moscow's FX reserves – replacing them with Euros, Chinese Yuan and gold in a move to dodge US sanctions over Crimea.
Technology mogul Elon Musk was meantime blamed today for a fresh plunge in the price of so-called cryptocurrencies after tweeting a broken heart emoji next to the word Bitcoin.
"Investors fleeing to gold as volatility rises in crypto market," claims a headline on Livemint, citing analysis from Indian asset managers Quantum Mutual Fund.
But domestic gold demand in the metal's 2nd largest consumer nation has collapsed however amid the sub-continent's ongoing Covid crisis, with gold imports into India – which has next-to-no mine production – sinking to 11.3 tonnes in May from 70 tonnes in April and a record 160 tonnes in March.
"The onshore discount in China collapsed further," says one Asian bullion trading desk, pointing to the gap between prices inside gold's No.1 consumer market and the global benchmark of London settlement, which sank earlier from its historic average premium of $9 per ounce to $25 below, suggesting a glut of local supply, worsened by a rumored "short sale" by a large trader after global prices peaked above $1900 for the first time since January.
Big tech players in China's "sharing economy" were yesterday summoned for a "stern reminder" from Beijing's pricing and monopoly watchdogs on ensuring "sound market price order" for their services.
The news – reported by the South China Morning Post in Hong Kong, where 7,000 police officers were today deployed to prevent any gatherings or protests for the city's annual Tiananmen Massacre vigils – comes after Beijing's Communist dictatorship clamped down further on cryptocurrency mining, trading and services last week, and also moved to impose price caps and "anti-speculation" in natural resources after copper and iron ore hit new all-time highs.
Today's meeting of G7 wealthy-nation finance ministers in London is meantime expected to agree a minimum corporation tax rate of 15% on multinational digital companies, who "raked in profit at levels not seen in any other sector of the economy" according to a joint statement from Germany, France, Italy and Spain, calling the need for a sales tax on such businesses "urgent".
Slipping 1.4% on Thursday, shares in e-commerce giant Amazon (Nasdaq: AMZN) have now lost over 8.1% from end-April's new record high.
Social-media platform Facebook ended yesterday's 2.0% below last Thursday's new record.
Silver also rallied with gold prices Friday, erasing 2/5ths of the week's earlier $1 drop to trade back at $27.60 per ounce.