END_OF_DOCUMENT_TOKEN_TO_BE_REPLACED

GOLD PRICES rose $10 per ounce Tuesday only to give it back as Western stock markets flat-lined and longer-term interest rates struggled to recover last week's multi-year highs but energy and industrial commodities rose as the European Union moved to ban coal imports from Russia over its troops' murder of civilians in Ukraine.
The US  White House blocked Moscow from making debt-service payments of $600m with money held in US bank accounts, and EU President Ursula von der Leyen also said she's  also seeking a "full transaction ban" on 4 major Russian banks, imposing fresh sanctions to "totally cut [them] off from the markets."
Crude oil rallied above $104 per barrel of European benchmark Brent while the French stock market fell, down 1.6%, after new opinion polls suggested far-right candidate Marine Le Pen will likely pass this weekend's electoral test to face current president Emmanuel Macron in the run-off vote on 24 April, while Hungary's BUX index lost another 1.7% after Viktor  Orban won a landslide re-election as prime minister for his 4th term.
Gold priced in the Dollar briefly $1940 per ounce and Euro gold prices peaked above €1770, with the UK gold price in Pounds per ounce rising to £1475 before also easing back.
"Russia's terrible act of aggression pulls demand and prices in opposite directions," said European Central Bank executive board member Isabel Schnabel in a speech Sunday explaining why the ECB continues to create QE stimulus and hold its key interest rate at minus 0.5% in the face of inflation running at multi-decade highs above 5% across the 350 million citizen currency union.
Germany's 10-year government borrowing cost last week hit 4-year highs at 0.74% while France's 10-year OATS yields hit its highest since 2017 at 1.10%.
Ten-year US Treasury yields today rose back to 2.45% per annum, just shy of late-March's near-3 year highs at 2.50%.
Looking at the Treasury Inflation Protected Security rate, "Inflation-adjusted US 10-year [TIPS] yields have moved closer to positive," notes Bloomberg reporter Lisa Abramowicz, "[rising] to the least negative since April 2020.
"But it's interesting that they're still negative at all, even as the Fed talks up potentially restrictive monetary policies in the near term."
Three-in-4 bets on Fed Funds interest rates now see the US central bank hiking by a half-point at its May meeting, the sharpest rise since 2000.
A hike of 50 basis points would put the Fed Funds rate at a ceiling of 1.00% per annum.
Consumer price inflation in the world's largest economy reached 7.5% in February. 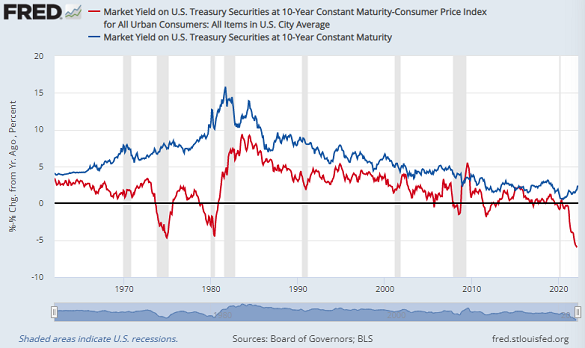 Adjusted by CPI inflation – the cost of living measure which TIPS bonds are priced against – conventional 10-year US Treasury yields have now traded below inflation for 20 consecutive months.
The longest such periods to date were 24 months from September 1973 and 23 months starting in January 1979. They coincided with the first and second oil shocks respectively.
Outside of recession, 10-year yields have lagged inflation only 4 times. The longest such stretch ran for 12 months from May 2011 and coincided with gold's financial-crisis peak at $1920 per ounce of September that year.
"The upcoming Fed rate hikes aimed at countering energy-induced price inflation brings forward recession risk much quicker than the markets previously believed," says the latest gold price outlook from strategist Nicky Shiels at Swiss bullion refiners and finance group MKS Pamp.
More broadly, "The macro backdrop has changed significantly" thanks to Russia's invasion of Ukraine, Shiels goes on, meaning that Pamp's "bull case" for gold outlined in its January forecasts "is now our base case" with an average 2022 price forecast of $2000 per ounce and "upside risk" of $2500.
"Recession or no recession, whatever your outlook growth is going to slow pretty significantly and that means [investors should be] moving more defensively," says Frances Donald, global chief economist and strategist at $895bn investment managers Manulife.
"When you look at the 40-year downtrend in that 10-year yield, I'm a believer we can't yet break out of it and that means we're probably near the peak in this move."
Gold ETFs – after seeing their 2nd heaviest-ever monthly inflows in March – have held little changed in size so far in April, with the giant GLD trust fund shrinking by 0.2% on Monday to need 1,090 tonnes of bullion backing, the smallest since 24 March.
Silver's largest ETF, in contrast, expanded yet again yesterday to need an additional 1.1% of bullion backing at its largest size since mid-June 2021.
Rising gold prices saw central banks remain net sellers in February as a group, new data from the mining industry's World Gold Council said Tuesday, the 3rd such outflow in 4 months as bullion set what was then its highest Dollar month-average since January 2021.