END_OF_DOCUMENT_TOKEN_TO_BE_REPLACED

GOLD PRICES struggled at multi-month lows in London on Friday even as action and comments from major central banks stemmed the sell-off in government bonds, edging longer-term interest rates down from this week's jump to multi-year highs but failing to reverse the drop in global stock markets.
With gold priced in Euros and Sterling now back down to March 2020 levels, erasing the Covid pandemic's 25% gains, the EuroStoxx 600 index of shares today slid 1.2% to erase almost all of February's previous 5.0% rise to 12-month highs.
New York futures pointed to further losses in the tech-heavy Nasdaq – like gold, a big winner in 2020's Covid Crisis – after the index's worst 1-day drop in 4 months.
With the ASX200 index meantime closing 2.3% lower, the Reserve Bank of Australia bought A$3 billion of Canberra's 3-year debt for the 2nd day running, supporting the bond's price and capping its interest rate at 0.15% as part of the "yield curve control" program announced last March.
The 19-nation European Central Bank may also raise its pace of sovereign debt purchases to support bond prices, said Eurozone policymaker Isabel Schnabel, because the spike in borrowing costs risks deterring government stimulus to aid the Covid recovery – a point confirmed by Japan's finance minister Taro Aso, who told the Parliament in Tokyo that "once Japan loses market trust over its finances, it will lose trust over its currency.
"In the worst-case scenario, we could see excessive inflation and sharp Yen declines that would have an immediate, devastating impact on people's livelihood."
Japan has in fact seen inflation average just 0.15% per annum since 1995.
But "a rise in real long-term rates at the early stages of the recovery," said the ECB's Schabel in a speech Friday morning, "even if reflecting improved growth prospects, may withdraw vital policy support too early and too abruptly given the still fragile state of the economy.
"Policy will then have to step up its level of support."
With government bond yields jumping worldwide this week, real interest rates – after accounting for inflation expectations – have risen faster, with market-based forecasts for the cost of living falling 0.03 percentage points on 10-year US bonds from last Friday's finish versus a 0.15 rise in 10-year yields.
Gold's sensitivity to real interest rates has grown stronger over the last decade, with bullion prices rising and falling more steeply in opposition to how inflation-adjusted yields move. 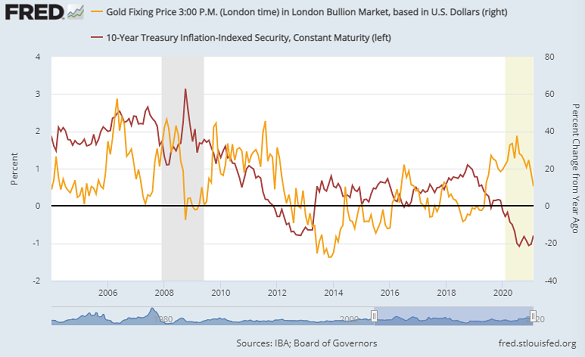 From 2011 to 2016 the average r-coefficient between Dollar gold prices and 10-year US TIPS yields – a market-based measure of inflation-adjusted interest rates – read minus 0.40 on a rolling 22-day basis. That strengthened to -0.65 across the last 5 years.
Ten-year TIPS yields closed Thursday at minus 0.60% per annum, the least negative since last June and jumping by 46 basis points since this time last month.
That's the fastest 4-week jump since the chaos of March 2020's Covid Crash hit all financial markets, and before that the Taper Tantrum of 2013, the year of gold's steepest price drop since 1981.
"There are few, if any, historical precedents to help judge the response of the economy to [both] this scale of shock and degree of policy stimulus," said Bank of England economist and policy-maker Andy Haldane in a speech Friday morning.
"The costs of getting these judgements wrong could be significant...[because] even this degree of policy stimulus may prove insufficient to return inflation to target...[or] as the vaccination programme is rolled-out, policy stimulus could over-stimulate the economy and, with it, inflation."
"Biden's $1.9 Trillion Rescue Plan: Vital Medicine Or Costly Overkill?" asks a headline on NPR.org today with the House of Representatives looking set to pass the new President's stimulus bill and send it to the Democrat-controlled Senate for approval.
With gold prices struggling to rally $5 from Friday morning's new 7-month low of $1755 per ounce, silver and platinum also fell, snapping their previous strength relative to gold in the face of the bond yield spike and falling to 1-week and 2-week lows respectively at $27.70 and $1183.