END_OF_DOCUMENT_TOKEN_TO_BE_REPLACED

GOLD PRICES sank through $1800 and silver fell back through $27 per ounce in London trade Tuesday as the sell-off in government bonds accelerated, driving longer-term interest rates sharply higher.
Rapid tests for Covid-19 could allow the UK's hospitality sector to re-open said a government minister today.
Pharma giant Moderna (Nasdaq: MRNA) has delivered over 45 million doses of its Covid-19 vaccine to the US government, and expects to double that by the end of March, with more now being ordered.
The Netherlands' night-time curfew is unlawful and must end, said a court in The Hague today – an order which the government immediately asked it to delay pending its appeal.
"[Economic recovery] could happen a bit faster than people think" reckons former president of the Federal Reserve Bank of New York Bill Dudley, "risking a rise in inflation that could impact markets."
With industrial metals led by copper and tin hitting new multi-year highs after crude oil yesterday topped $60 per barrel for the first time since the Covid Crisis began 12 months ago, fixed-income government bond prices fell worldwide.
Ten-year US Treasury yields jumped to 1.26%, the highest since late-February 2020 and one-third of a percentage point above New Year's Eve – the fastest 6-week rise since October 2018.
Thirty-year rates meantime jumped through 2.00% per annum, extending their strongest 6-week jump since last summer to offer buyers 1/4 more in yield than on New Year's Eve.
Paying no interest (and indeed costing a small rate for secure storage and insurance), gold bullion sank in price as longer-term interest rates rose, falling near 2-week lows at $1793 per ounce. 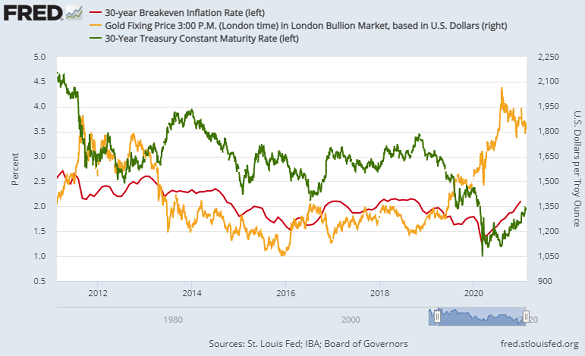 "Global bonds are suffering the worst start to a year since 2013," says a headline on Bloomberg, pointing to the price-drop in fixed-income assets.
Spring 2013 saw gold's steepest price drop in 3 decades amid what became known as the Taper Tantrum.
"[The rise in bond yields] matters," wrote Dudley, now a visiting professor at Princeton, in an op-ed last week, "because inflation expectations tend to be an important determinant of actual inflation outcomes."
Also rising as bond yields jumped, the US cost of living will rise 2.20% per year on average between now and 2051 according to pricing in Treasury Inflation Protected Securities, with inflation over the next decade set to average 2.26% on 10-year rates in the TIPS market.
That's the highest 'breakeven' rate forecast by US bond-market pricing since August 2014.
US consumer-price inflation since then has in fact averaged 1.56% per annum, and it has averaged 2.24% across the last 30 years.
Today's sell-off in fixed-income meantime drove 10-year UK rates up to the highest since last March at 0.60% per annum, while Germany's 10-year Bund yield reached its least negative since June at -0.36%.
Italy's borrowing costs also rose, but by less than any other European nation, after the first sale of new debt under Prime Minister Mario Draghi was heavily over-subscribed, drawing €110 billion in demand from investors keen to see the former head of the European Central Bank "starting a process of structural reforms to reduce domestic political uncertainty," says a strategy researcher at banking group UniCredit in Milan.
That cut the spread in Italy's 10-year borrowing costs over Germany's comparable interest rate to just 0.90 percentage points, near the lowest in the 10 years since Rome was caught in the Eurozone debt crisis which followed the global banking crash.
Last week saw a record inflow of investor cash into equity funds, according to Bank of America.
The giant SPDR Gold Trust (NYSEArca: GLD) in contrast saw its 5th consecutive weekly outflow, while the smaller iShares product (NTSEArca: IAU) shrank for the 4th week running.
Like them, the iShares' Silver Trust (NYSEArca: SLV) also extended its outflows on Monday, shrinking by a further 0.3%.
After a massive inflow of new investment needed an extra 3,417 tonnes of silver backing between 29 January and 1 February, the SLV has now shrunk without pause, with cumulative outflows equalling 1,518 tonnes of metal.
"Silver is all a question of mood," said brokerage StoneX's chief analyst Rhona O'Connell on a public webinar from UK spread-betting bookmakers City Index today.
"[It] carries a wealth warning...because it normally follows gold, outperforming in a bull market and underperforming in bear markets. If gold is doing nothing, then silver's correlation with copper prices comes through."
Bouncing to $27.07 per ounce in early afternoon trading on Tuesday, the price of silver – three-fifths of which goes to industrial use each year – held unchanged for the month of February so far, albeit $3 below the Reddit Ramp spike.
Gold in contrast was today trading 3.0% lower from the end of January.
Peaking at $1340 overnight, platinum meantime erased all of this week's 5.9% gains so far, but continued to hold at more than twice the price hit during last March's Covid Crash to the cheapest since 2002.