END_OF_DOCUMENT_TOKEN_TO_BE_REPLACED

GOLD PRICES held at 9-month highs against the Dollar on Monday, with the weaker US currency offsetting the impact of rising interest rates in the bond market after speculators in Comex futures and options built their largest net bullish betting on gold since April and the giant GLD gold ETF saw its first weekly inflow of investment cash in 2023, writes Atsuko Whitehouse at BullionVault.
Ten-year US Treasury yields – a benchmark rate for government as well as many finance and commercial borrowing costs – edged up to nearly 3.5% per annum, recovering from 4-month low reached last week.
Spot prices steadied around last week's close of $1925 per ounce, the most expensive level on record for gold entering Chinese New Year.
Financial markets in China – the world's No.1 gold mining, importing and consumer nation – are now closed for a week for the Lunar New Year holidays.
That might enable a dip in the gold price according to some analysts.
"[But] it is above all speculative financial investors who have been expanding their net long positions," according to a note from German bank Commerzbank, saying that physical demand in China – which peaks around the Chinese New Year – has not been the driver of gold's recent rally, pointing to low net imports from Hong Kong and Switzerland.
Latest data to Tuesday 17 January show that hedge funds and other leveraged speculators in Comex gold futures and options grew their bullish betting and cut their bearish bets as a group for the 7th week in a row.
Overall, that pushed the net long position of Managed Money traders 13% higher to a 9-month high. 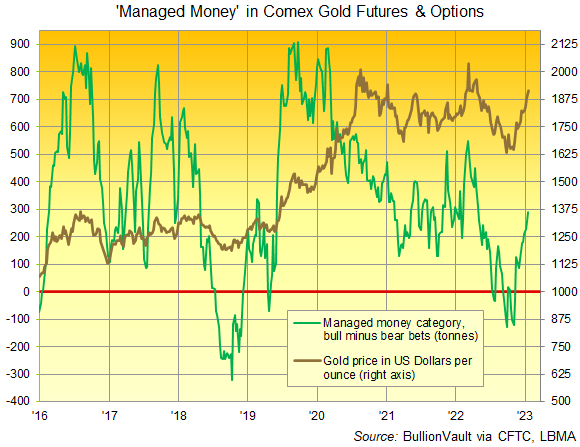 Meanwhile, both the gold-backed ETF the SPDR Gold Trust (NYSEArca: GLD) and the iShares gold ETF (NYSEArca: IAU) saw net investor inflows last week, making the 1st and 3rd consecutive weekly inflow respectively.
The IAU has not seen any daily outflows in 2023 so far, taking its number of shares in issue to the biggest since mid-November.
"Were ETF buying to return [in force], that would limit any overbought dip in the metal," says Caesar Bryan, portfolio manager of the Gabelli Gold Fund.
"A setback [for Comex bulls] could be looming," warns Commerzbank, "if [the markets are] forced to adjust their expectations with regard to the Fed's policy" on interest rates, now universally expected to deliver a small 0.25-point rise at next week's meeting.
Fed governor Christopher Waller, known as one of the voting committee's most hawkish members, said he favors a 0.25-point rise because "there appears to be little turbulence ahead" in a speech Friday, the last before the US central bank's policy-makers go into a media blackout ahead of the decision.
But he also echoed comments from Fed vice-chair Lael Brainard, New York Fed president John Williams, and other hawkish Fed members that the central bank must "stay the course" on further rate rises to defeat inflation.
Interest rates in the 19-nation Eurozone will rise 0.50 points both next week and in March and then keep climbing after that, predicted European Central Bank governing council member Klaas Knot on Sunday.
ECB policymaker Robert Holzmann also said Friday he expects at least two interest-rate increases of 50-basis points in the first half of this year.
As the Euro strengthened against the US Dollar on the FX market on Monday, wholesale gold bullion in the spot market fell 0.3% to €1768 per ounce for Eurozone investors.
Gold prices in the UK Pound edged up 0.2% to £1557.