END_OF_DOCUMENT_TOKEN_TO_BE_REPLACED

GOLD INVESTING prices stayed on track for a third weekly gain in London on Friday, holding tight around the $1800 level as longer-term interest rates bounced from their steep drop and global stock markets rallied from their mid-week losses.
Silver in contrast showed a 2.0% drop down below $26 per ounce, while platinum – industrial use of which accounts for the bulk of annual demand – held unchanged from last Friday at $1093.
World No.2 economy China today eased its monetary policy, allowing commercial banks to lend out more of the money their customers put on deposit even as new data showed a sharp jump in new lending in June, beating analyst forecasts by almost one-fifth.
Wednesday night's release of meeting notes from the Federal Reserve's June decision showed the US central bank is "less hawkish than the mid-June market reaction was anticipating," says bullion and commodities brokerage Stone X in a note.
For the Fed to raise rates or taper its $120bn per month of quantitative easing, "Substantial further progress" on economic growth and employment "is the name of the game."
Eurozone monetary policy is also set to stay weaker for longer after Thursday's new strategy review changed how the world's 3rd largest economic region will target 2.0% annual inflation in the cost of living.
Deposit rates for commercial banks at the ECB have now been negative since 2014 and held at minus 0.5% since September 2019.
Adjusted for Euro-area inflation, that put the ECB's deposit rate at minus 2.5% per annum in May, its most negative since October 2018's record low of minus 2.7%. 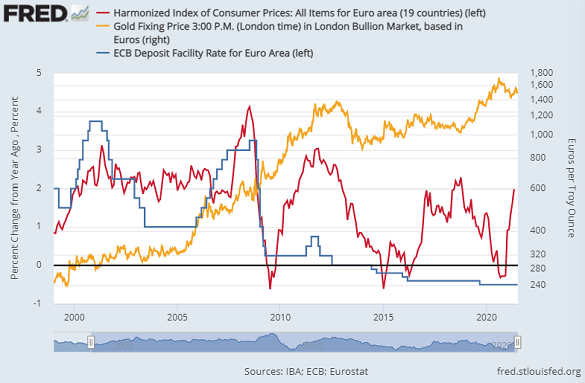 "Despite concerns that central banks may be wavering in their commitment to loose monetary policy following recent jumps in inflation, it seems the ECB are doubling-down," says Krishan Gopaul, senior analyst at the mining industry's World Gold Council.
"Given what this might mean for monetary policy going forward, we believe that gold investment among European investors will remain well supported."
Investors in Germany accounted for 1/3rd of the heavy gold inflows at BullionVault last month.
Thursday's statement from the European Central Bank says it will now make 2.0% inflation a "symmetrical" target, rather than an upper limit, matching the strategy of other central banks such as the US Fed and Bank of England but emphatically not targeting an average 2.0% over extended periods according to ECB President Christine Lagarde.
The ECB will however target 2.0% over "the medium term", and "this requires especially forceful or persistent monetary policy measures" when interest rates are already near zero, it said.
"This may also imply a transitory period in which inflation is moderately above target."
"What can't go down must go up," says a gold investing analysis from Nicky Shiels at Swiss refining and finance group MKS Pamp, saying how last Friday's "solid" US jobs data should have given "the greenlight" for hedge funds to sell gold short "and critical floors to fail...[but] that didn’t occur.
"The [Fed] minutes could've been parsed for hawkish titbits, but it was largely a non-event for the market as they remain cautious to taper."
This week's sharp drop in real US interest rates in the bond market means "Gold should be $1880 given 10-year TIPS yields at minus 0.96," Shiels concludes.
"Gold looks somewhat cheap," agrees Ole Hansen at spread-betting platform Saxo Bank this week, pointing to the same pattern of gold prices moving in opposition to 10-year TIPS yields and suggesting that gold investing prices should be $100 above current levels.
Looking to add housing costs to the inflation data it tracks, as well as putting climate change "squarely in the middle of our strategy" – impacting the collateral it chooses to lend against and the corporate debt it buys with quantitative easing – this week's ECB review was the first in 18 years.
Since then "the Euro area economy and the global economy have been undergoing profound structural changes," the central bank's statement says, setting the next review for 2025.
UK GDP growth slowed hard to 0.8% in May from 2.0% in April, new data said Friday, "But that's after months of positive surprises and a surge in delta cases and track & trace isolation," says economist Sabina Kalyan at CBRE Global Investors in London.
"Let's judge the situation after July 19th and Euro2020-related spend."