END_OF_DOCUMENT_TOKEN_TO_BE_REPLACED

GOLD INVESTING prices whipped in a $10 range either side of last week's finish in Asia and London trade Thursday, moving around $1780 per ounce as global stock markets rose – along with government borrowing costs – following yesterday's "no change" decision on US interest rates and QE from the Federal Reserve.
Asked if the Fed is "talking about talking about tapering" its $120 billion per month of new money creation and bond buying, "The economy is a long way from our goals," said the central bank's president Jerome Powell, pointing to ongoing Covid infections and restrictions.
The Dollar held at 2-month lows this morning on the currency market, while commodity prices rose, taking US crude oil back above $65 per barrel for the first time in 7 weeks.
New data from the mining-industry's World Gold Council meantime showed demand for the precious metal continues to seesaw between consumers and investors worldwide, with Q1 jewelry demand rising by the same quantity year-on-year as gold-backed ETF investment trusts shrank from the end of 2020.
Productive use – led by electronics – has recovered entirely from early 2020's Covid drop, and small-bar and coin demand stayed strong as 2021 began. But central-bank demand amid the pandemic remains the weakest in a decade.
Altogether, and as a proportion of total gold demand net of selling, that means investing fell below 50% for the first time since Q1 2018 when ETF, coin, small bar, central-bank and gold-miner hedging are combined. 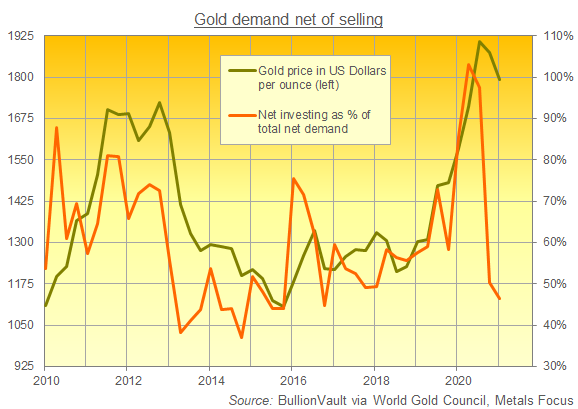 US Treasury bonds today led another drop in government debt prices, pushing borrowing costs higher for major Western sovereigns and taking 10-year US yields up to 1.66% per annum, their highest in almost 3 weeks.
Inflation-protected bond prices rose again however, pushing the yield on 10-year TIPS down to 2-month lows at 0.79% per annum.
That gap implies 10-year US inflation of 2.45% per annum, the highest such 'breakeven rate' since April 2013.
Saying that annual inflation on the Fed's preferred measure is likely to breach its 2.0% target over the next few months, Powell on Wednesday called it as "transitory" because of the base effects from last spring's Covid Crash, adding that the economy is "a long way" from full employment – an equal part of the central bank's legal mandate, alongside price stability.
"We've had one great jobs report, it's not enough...We're a long way from our goals [and so the Fed] will continue to give powerful support to the economy until the recovery is complete."
"Is this a hint towards the start of tapering?  It would appear not," says analyst Rhona O'Connell at brokerage StoneX, calling the overall impact on gold "much as expected.
"Supportive but not outright bullish in the short term. Potentially bullish in the longer term, especially combining negative real interest rates and excess liquidity."
Shares in the world's largest gold-mining firm, Newmont Corp (NYSE: NEM) meantime slipped 1.2% ahead of Thursday's open in New York after it posted weaker-than-expected quarterly output and profit figures, blaming Covid disruption and the sale of its Red Lake project in Canada to Australian miner Evolution (ASX: EVN).
According to today's World Gold Council data, compiled by specialist analysts Metals Focus, gold mine output worldwide was deadflat in Q1 from last year's quarterly average, the weakest level since 2015.
China, the world’s biggest gold consumer, saw consumer demand in the first quarter of 2021 rise to 286.4 tonnes from the previous quarter, the WGC said, a stark contrast from the trend of global gold demand which sank to a 13-year low.
January-to-March's rebound in jewelry demand in China – the No.1 gold consumer market, which collapsed as the Covid pandemic began in 2020 – "was underpinned by three main drivers," says WGC director Wang Lixin:
"Improving economic conditions, lower gold prices and sales spree related to [Lunar New Year] holidays.