END_OF_DOCUMENT_TOKEN_TO_BE_REPLACED

GOLD PRICES jumped again Thursday, hitting new 11-week highs versus a falling US Dollar after new data said inflation slowed hard in the world's largest economy last month, with claims for jobless benefits rising, spurring hopes that the Federal Reserve will now 'pivot' away from further interest-rate hikes.
Already breaking through the downtrend in place since March's record-high this week, the gold price today added another $30 to reach $1747 per ounce as the US Dollar fell almost 1.9% against the rest of the world's major currencies and lost 5.0% from late-September's 2-decade peak on its DXY index.
Western stock markets also leapt on the inflation slowdown – and so-called digital currency Bitcoin rallied by more than 1/10th from its new 2-year lows, fuelled by the collapse of crypto platform FTX – as betting that the Fed will raise rates by only a half-point at next month's meeting jumped from 56% to more than 80% of positions tracked on the CME derivatives exchange's FedWatch tool.
"I'm sorry. That's the biggest thing," tweeted FTX boss Sam Bankman-Fried today, revealing that while he "thought" customer leverage at the crypto-currency trading platform was zero – and that FTX held 24 days' worth of typical daily Dollar withdrawals – those figures were in fact 1.7x and 0.8 as concerns over the business's liquidity and solvency spurred a run for the exit.
"I f**ked up, and should have done better.
With the US Dollar trading 16.4% higher from this time last year against the rest of the world's major currencies, Bitcoin has now dropped almost 3/4 of its value in USD terms.
Gold has lost 8.4% as tracked by the giant GLD gold-backed ETF, while the 500 largest US-listed corporations have dropped 19.3% on SPDR's SPY ETF. 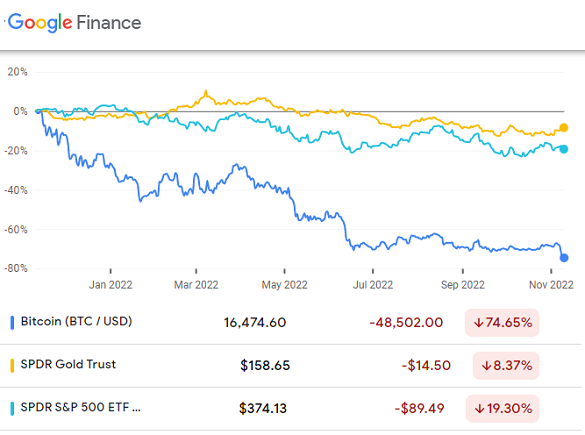 Continuing claims for US jobless benefit claims rose last week to the highest since late-March, new data said Thursday, rising over 14% from May's 5-decade lows.
Headline CPI inflation meantime dropped almost half-a-point to 7.8% in October – the slowest rise since January – while 'core' inflation excluding fuel and food slipped only 0.3 points from September's fresh 4-decade high to 6.3% per year.
US bond yields sank across the curve on that news, pulling 3-month rates down almost 15 basis points to 4.15% while the yield offered by 10-year Treasurys fell below 4.00% for only the 2nd time in a month, down nearly 1/5th of a percentage point.
That only widened the gap between short-term and longer-term rates however, pushing the 10-year vs. 3-month spread to minus 30 basis points, the most inverted since mid-2019's yield curve inversion, widely taken as the bond market signalling that a recession lay ahead.
"If inflation in the US turns out to be weaker than expected," says a trading note from Belgian bullion refiners Umicore, "this should most likely strengthen the gold price because it would ease interest rate fears."
But talk of a Fed 'pivot' away from hiking rates to fight inflation is "entirely premature" said 2022 and 2023 voting member Neel Kashkari, president of the Minneapolis Fed, on Wednesday.
"I think we are on a good path right now...We are united in our commitment to getting inflation back down to 2%."
Freezing customer withdrawals after users pulled out $6bn in 72 hours, FTX yesterday saw competitor platform Binance walk away from a rescue deal because "the issues" – thought to be regulatory and law enforcement as well as financial – "are beyond our control or ability to help."
Barely 12 months ago FTX raised $421m from 69 'blue chip' investors including asset-management giant Blackrock, the Ontario Teachers’ Pension Plan, hedge fund Tiger Global and Singapore's state portfolio firm Temasek, valuing the crypto platform at some $25bn.
But one of those investors, California venture-capital firm Sequoia, yesterday wrote down its $201m stake to zero – making FTX the largest "unrealizable" investment in Sequoia's 5-decade history – as rumors spread that the crypto platform needs at least $8bn in capital to stay solvent.
Crude oil prices fell hard once again Thursday after the US inflation data, losing over 7% from this time last week per barrel of US benchmark WTI.
Silver in contrast joined the gold price in extending its run of strong gains, surging to a new 5-month high of $21.80 per ounce for a rise of 15.3% so far this month.