END_OF_DOCUMENT_TOKEN_TO_BE_REPLACED

GOLD PRICES erased this week's earlier $25 gains to 6-week highs in London on Friday, falling back to $1733 per ounce as longer-term interest rates jumped after new US and China data said factory input costs rose faster than analysts expected last month.
Global stock markets fell as borrowing costs rose, pulling both the MSCI World Index and the S&P500 index of US corporations back from new all-time highs.
Commodity prices also fell, cutting US crude oil costs by 10% from mid-March's 2.5-year high of $66 per barrel.
"A sharp rise in US interest rates and a stronger Dollar have weighed on gold recently," says the mining industry's World Gold Council.
"But a rebound in economic activity and a lower gold price have provided opportunities for consumers and strategic investors alike."
US factories paid 4.2% more for raw materials in March 2021 than 12 months earlier, the fastest annual jump since September 2011 according to the Labor Department.
Back then, gold prices reached a record peak of $1920 per ounce, a level not beaten until summer 2020's top at $2075.
China's factory-gate prices meantime rose this March at their fastest annual pace in almost 3 years, leaping by 4.4% according to the National Bureau of Statistics.
"As the world's largest exporter," MarketWatch quotes one investment manager, "there is growing risk China could 'export' such inflation to the rest of the world."
But the base for today's year-on-year comparisons, March 2020 saw an unprecedented crash in productive commodity prices, taking crude oil below zero the following month as the Covid Crash shut travel and driving worldwide, causing a record glut of supply over demand which briefly meant that producers could not give it away or find storage space.
"[This] rise in inflation...could support gold prices in the coming weeks," Reuters today quotes ratings-agency Fitch, "especially if [inflation] rises faster than bond yields.
"In the more medium term, the rise in bond yields is likely to put renewed pressure on gold." 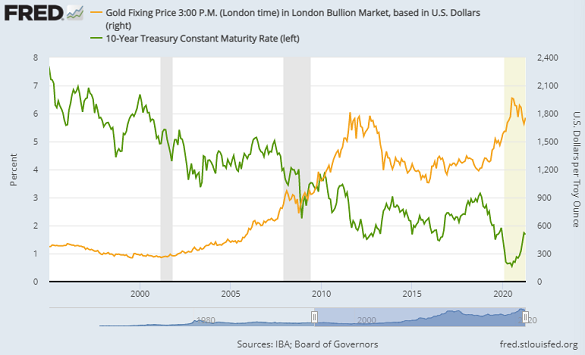 Major-economy bond prices fell across the board Friday, snapping this week's earlier rally and pushing government borrowing costs back up to 1.67% on 10-year US Treasury debt.
That was a 14-month high when reached 3 weeks ago.
Inflation rates implied by 10-year Treasury TIPS bonds have meantime flatlined now for 3 weeks around 8-year highs of 2.3% per annum, while inflation rates implied by 5-year Treasury bonds have flatlined for 4 weeks around 2.5% per annum.
That is the highest such 5-year "breakeven rate" implied by bond-market action since crude oil prices reached record highs at $150 per barrel in summer 2008.
"The global economy is recovering from the crisis faster than expected," says today's communique from the virtual Spring Meeting of the International Monetary Fund, "thanks to an unprecedented policy response and rapid progress in vaccine development.
"But the prospects for recovery are highly uncertain and uneven...[and] elevated financial vulnerabilities could pose risks should global financial conditions tighten swiftly."
With the Dollar's FX index against other major currencies rallying from 6-week lows, gold priced in the Dollar today traded $345 below last August's record Covid Crisis high at what was an 8-month low for new buyers when gold fell to this level at the end of February.
Euro investors wanting to buy gold saw the price drop for the first week in 5, slipping to €1464 per ounce.
UK gold prices in Pounds per ounce meantime added almost £20 for the week to trade at £1267 as Sterling extended its losses into Friday's London close.
Silver and platinum prices also retreated with gold, ending the week around $25.20 and $1213 per ounce respectively.