END_OF_DOCUMENT_TOKEN_TO_BE_REPLACED

GOLD PRICES fell to 2-month lows beneath $1800 against a rising US Dollar in Asian and London trade Thursday, dropping 2.8% for the week so far as claims for US unemployment benefits came in below analysts forecasts for the latest data.
With yesterday's ADP Payrolls report pointing to stronger-than-forecast hiring in tomorrow's official Non-Farm jobs estimate, global interest rates meantime rose sharply with inflation expectations amid new forecasts for a strong economic rebound and reflation from the Covid Crisis thanks to mass vaccinations.
Gold price forecasts for 2021 now range from the top bear's $1650 to the most bullish $2300 per ounce in today's annual outlook competition from bullion market trade association the LBMA.
Consensus sees the gold price averaging $1974 per ounce across 2021, a rise of 11.5% from 2020's record high as central banks and governments continue their unprecedented monetary and deficit-spending stimulus.
But with Western stock markets rising still further on Thursday as industrial commodity prices erase the last of early 2020's record 30% crash, longer-term interest rates in the bond market rose yet again, pushing the "spread" between 10-year and 2-year US Treasury yields towards 4-year highs.
Break-even inflation rates implied by US bond prices yesterday hit 2.19% per annum between now and 2031, the highest such forecast for a loss of purchasing power in the Dollar since August 2014.
Back then 10-year bond yields stood at 2.40%, real rates were +0.19%, and gold cost $1313 per ounce.
US 10-year yields today traded at 1.14%, with inflation-protected Treasury rates at -1.04% and gold at $1808. 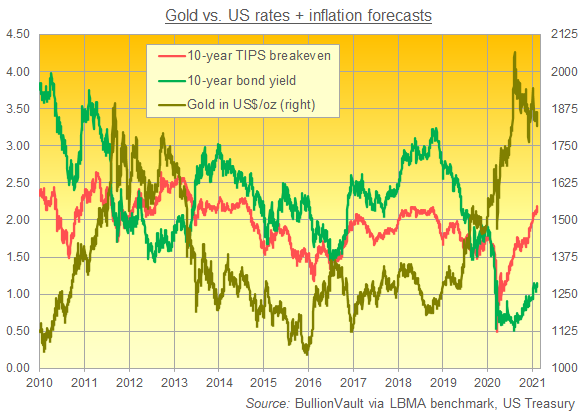 "Gold got stopped in its [run] higher around 3 weeks ago," says the precious metals team at French bank and London bullion market maker BNP Paribas, "when US 10-year Treasury yields accelerated above 1% [as] investors started to position for an economic expansion in the US...stimulated by fiscal and monetary policy.
"This economic expansion through debt should have supported gold, but instead the yellow metal suffered not from long liquidation but from a lack of interest from investors.
"This is only transitory...[because while] gold is set to underperform equities and broader risk assets as the rotation out of safe-haven continues...the pursuit of happiness through debt and inflation shouldn't bode too well for the long-term economic consequences.
"[Gold's] upside resides in the risks in the current reflation narrative, especially asset bubbles."
Gold prices in China – the metal's No.1 consumer market, set to mark the peak gold-buying Lunar New Year a week tomorrow – had already fallen overnight to their lowest in a month in Yuan terms, but the premium in Shanghai compared to London quotes widened to more than $8 per ounce.
Back in line with pre-Covid incentives for new imports, that extends this run of premiums into their 4th week after last year's record run of discounts as domestic supplies swamped Chinese demand.
Euro gold meantime fell through €1500, down €250 from its record peak of early August, while the UK gold price in Pounds per ounce sank to the lowest since April 2020 at £1323 as interest rates on 10-year Gilts jumped to 0.46% per annum – the highest benchmark UK bond yield since last March's start to the Covid Crisis – following a "no change" decision on zero rates and record QE asset purchases from the Bank of England.
"Economy to rebound strongly due to vaccine," says the BBC, picking a quote from the Bank's policy statement.
But "GDP is expected to have risen a little in 2020 Q4 to a level around 8% lower than in 2019 Q4," the UK central bank also said – the worst plunge of any major economy – "[and] is expected to fall by around 4% in 2021 Q1, in contrast to [its own November] expectations.
"Labour market indicators remain difficult to interpret...Average weekly earnings growth has been notably stronger than expected...although this may overstate underlying pay growth."
Over in silver, the giant iShares Silver Trust (NYSEArca: SLV) yesterday saw net investor liquidation of 1.4%, cutting its backing of bullion bars to 20,819 tonnes for the 1st outflow since last Wednesday night's Reddit Ramp spurred a historic inflow equalling 13.5% of last year's silver mine output worldwide.
Silver today again held firmer as gold prices fell, trading near last weekend's level at what was a 7-year high of $26.20 when reached last July.