END_OF_DOCUMENT_TOKEN_TO_BE_REPLACED

GOLD PRICES snapped this week's rally in London trade Thursday, edging back twice to $1820 per ounce as the rally in global stock markets also eased and commodity prices slipped while new inflation said US companies faced the highest cost inflation in at least a decade in 2021.
US crude oil prices edged back from 2-month highs while European natural gas prices also fell, down for a 5th session running on Feb' 2022 contracts, down almost 60% from the pre-Christmas spike to fresh all-time records.
With US producer prices rising 9.7% across 2021 on today's new data, just below analyst predictions, the US Treasury's 10-year bond yield – the key borrowing cost for Washington, and a benchmark for many private-sector rates – slipped 5 basis points below Monday's spike to 1.78% per annum, the highest since New Year 2020.
The yield on 2-year debt meantime held unchanged at 0.92%, its highest since the February 2020 crash in global financial markets as the Covid pandemic went global.
Betting on interest-rate futures now sees a better than 80% chance that the US Federal Reserve will make its first post-Covid hike to overnight borrowing costs in March, up from "no chance" as recently as late-September according to the CME derivatives exchange. 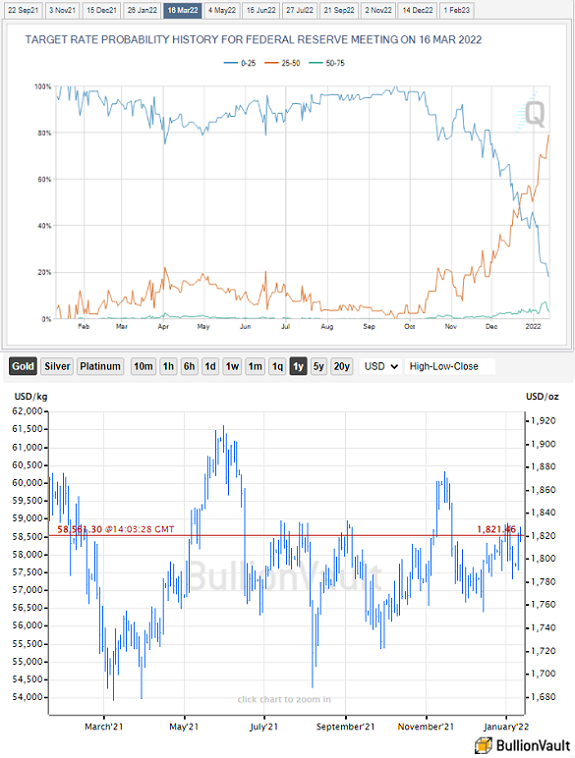 "While rate hikes can create headwinds for gold," says a new 2022 outlook from the mining-industry-backed World Gold Council, "history shows their effect may be limited.
"At the same time, elevated inflation and [equity] market pullbacks will likely sustain demand for gold as a hedge [while] jewellery and central bank gold demand may provide additional longer-term support."
"Gold purchases by central banks occurred with some regularity" in late 2021, notes a separate market review from precious-metals trade body the London Bullion Market Association, "with Russian reserves growing to be among the world's 5 largest and Singapore buying for the first time in decades.
"The Polish central bank announced it was likely to be building gold reserves throughout 2022."
The Central Bank of Ireland meantime began what looks like a program of gold purchases last September, buying gold for the first time since 2009 and acquiring around 3 tonnes by December according to IMF data.
"[Our] transactions in gold are commercially sensitive," a press officer at the Eurozone member's central bank told Bloomberg when asked last week, "and it cannot disclose details of its asset management strategy beyond the information set out in the Annual Report."
"Gold is down but not out," says a trading outlook from Swiss refiners and finance group MKS Pamp, "with an ability to rally when consensus is bearish."
Even so, "We acknowledge that if $1675 is broken," says the MKS forecast for 2022, "all hope of pricing in inflation is gone and a new bear market is enacted, where it'll lose appeal as a monetary asset and inflation hedge."
Yesterday's data releases said US inflation matched analyst forecasts of a new 4-decade record at 7.0% across 2021, but world No.2 economy China saw consumer prices slow to a 1.5% annual rise last month, while factory-gate inflation also missed expectations, slowing from 12.9% to 10.3% as new lending to the Communist nation's private sector shrank by more than 1/10th from December's level.
Wholesale prices in Germany – the world's 4th largest national economy, accounting for more than 1/4 of the 19-nation Eurozone's total output – meantime defied analyst forecasts by failing to beat November's new record inflation of 16.6% per year and slowing by half-a-percentage point.
With gold in Euro terms now 4.1% above its price of this time last year, Germany's longer-term government borrowing costs have risen 0.45 percentage points over the last 12 months to minus 0.07% per annum, while France and Italy's have risen 0.63 and Greece's by 0.85 according to Bloomberg data.
Ex-European Union member the UK's 10-year Gilt yield has meantime risen by 0.82 percentage points over the last 12 months, the steepest rise of any major developed-world economy, with the Bank of England also becoming the first major central bank to raise its key interest rate from its Covid emergency low near 0%.
The UK gold price in Pounds per ounce today slipped back to £1327 – showing a 2.5% year-on-year drop – despite the worsening political crisis for Prime Minister Boris Johnson, now facing calls from within his own ruling Conservative Party to resign over breaking rules his own Government's set and he himself repeatedly told the nation during the Covid lockdowns and social restrictions of spring and winter 2020.