END_OF_DOCUMENT_TOKEN_TO_BE_REPLACED

The GOLD PRICE rose sharply for a 2nd day running for US investors on Thursday, despite a lack of ETF investment buying, as the Dollar fell after new data showed a drop in energy prices pulling annual inflation in the world's largest economy down to its slowest pace so far in 2022.
That boosted hopes for a 'pivot' in Federal Reserve interest-rate tightening early in 2023 after Fed chair Jerome Powell said yesterday that this month's rate rise will be "moderate", capping the sharpest run of steep hikes since the early 1980s.
Global stocks and bond prices also rose as the Dollar fell before edging back, and silver prices spiked more aggressively, hitting the highest since June at $22.70 before easing 30 cents while gold touched its highest since August just above $1800 per ounce but held more muted in Euro and UK Pound terms.
Twelve-month inflation on the PCE prices index dropped to 6.0% on today's new data for October, exactly the Federal Reserve forecast stated by Powell in his speech to the Brookings Institute in Washington late Wednesday and 1 percentage point below June's 4-decade high.
"[But] core inflation often gives a more accurate indicator of where overall inflation is headed," the Fed chief went on, correctly forecasting a drop to 5.0% for the PCE measure excluding fuel and food, down just 0.4 points from February's 4-decade high even as the central bank raised its key interest rate by 3 whole percentage points. 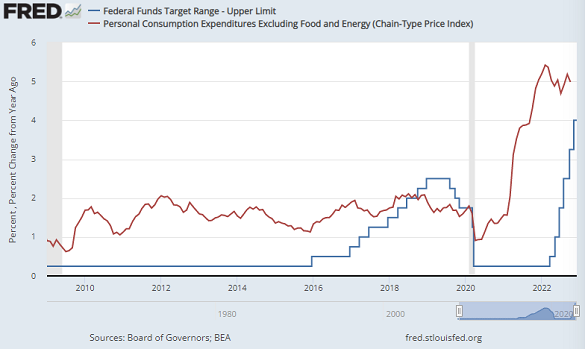 "Despite the tighter policy and slower [economic] growth over the past year, we have not seen clear progress on slowing inflation," chairman Powell went on.
"[But] monetary policy affects the economy and inflation with uncertain lags, and the full effects of our rapid tightening so far are yet to be felt...The time for moderating the pace of rate increases may come as soon as the December meeting."
US stock markets leapt on the news, pulling the MSCI World Index of global shares up to a 2.1% daily gain, the strongest 1-day rise since weaker-than-expected US inflation data spurred hopes of a Fed pause or pivot in hiking rates in mid-November.
Longer-term US borrowing costs meantime fell sharply, cutting the 2-year Treasury bond yield by 0.2 percentage points to test its lowest level since mid-October at 4.30% per annum Thursday morning while 10-year and 30-year yields hit 10-week lows at 3.58% and 3.67% respectively.
Even before the bump from Powell's comments overnight, gold bullion had ended November 7.0% higher than it began in US Dollar terms on London's benchmark price, the steepest monthly rise since May 2021.
US gold prices today extended that rebound as the Dollar dropped to 4-month lows on its trade-weighted index against the rest of the world's major currencies, reaching the highest since mid-August at $1796 per ounce.
Euro and UK Pound prices in contrast only touched 2-week and 1-week highs respectively at €1711 and £1474 per ounce.
Wednesday's Fed news and price-jump didn't see any inflows to US bullion-backed trust-fund products, with the giant GLD and IAU gold ETFs ending November with their 7th consecutive monthly outflow of investors, down 1.4% and 1.6% respectively.
The giant SLV silver trust also shrank across last month, down by 0.9% as the Dollar price of silver rose 12.7%, its steepest climb since December 2020.
US gold futures also saw interest decline, both on Wednesday and across the month, with the number of open contracts on the Comex exchange ending November 7.5% smaller, while open interest in more speculative gold options contracts shrank 27.6%.
Comex silver interest meantime shrank 12.1% last month for CME futures and 31.0% for options.
"We still see short-covering in the futures market as the dominant driver of these [precious-metal price] moves," says analyst Carsten Menke at Swiss bank Julius Baer, calling the overnight jump in gold and silver rates "out-sized".
"Investors are still staying on the sidelines."
Powell's comments on Wednesday came a week after the release of minutes from the Fed's November rate-hike decision said meeting attendees were already discussing a move to slower rate rises.