END_OF_DOCUMENT_TOKEN_TO_BE_REPLACED

GOLD PRICES held unchanged in London on Thursday, trading in line with last weekend's 5-month highs for Dollar investors as global stock markets slipped for a second day running and both Western ETF investors and major gold consumer nations showed signs of weaker demand in the face of last week's US-inflation-data spike in bullion costs.
With gold priced in the Dollar at $1865 per ounce, UK gold prices held below €1385 while Euro and Yen gold prices remained near their highest on record at €1645 per ounce and ¥6,850 per gram respectively.
The giant SPDR Gold Trust (NYSEArca: GLD) expanded yesterday for the first time this month, but only by 0.9 tonnes as its shares in issue grew by less than 0.1%.
The smaller iShares gold ETF – the IAU product – was meantime unchanged in size yet again following the shock US inflation data which sent gold prices up through "key" technical levels. 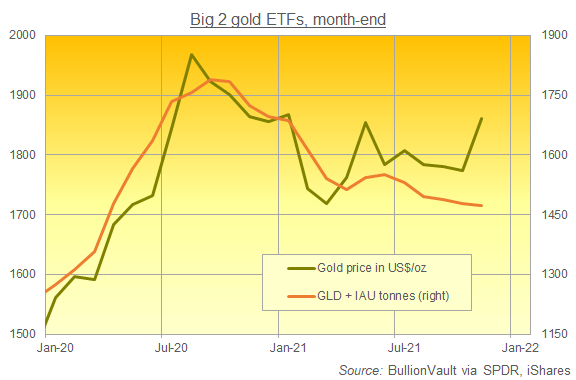 Gold prices in No.1 consumer market China on Thursday edged back up towards last week's 5-month highs in Yuan terms, but they slipped compared to quotes for settlement in London, heart of the global bullion market.
The price gap between London and Shanghai eased from a weak $2.65 per ounce to just $1.20, suggesting weak local demand in the face of the precious metal's sudden jump.
Gold No.2 consumer nation India – where domestic prices have shown a premium to London on only 9 days since the start of July – meantime saw shares in giant e-payments provider Paytm (NSE: PAYTM) crash by 1/5th on today's stock-market debut, Mumbai's largest-ever IPO, slashing over $5bn off the company's value to the equivalent of US$13.5bn.
Called a "cash guzzler" that lacks "focus and direction" by some bank analysts, Paytm hasn't joined the gold-loan boom enjoyed by other non-bank financial companies in the world's 2nd most populous country – a market where consumer borrowing backed by pledging jewelry or other gold items is now worth well over US$60bn in total.
Growing by 66% over the last year for bank lenders, gold loans have surged to fresh all-time highs for the much larger non-bank gold loans business.
The central bank of gold No.5 consumer nation Turkey meantime slashed its key interest rate to 15.0%, citing "the transitory effects of supply-side factors" on sending inflation up toward 20% and sending the Lira down to fresh record lows on the FX market.
Now down by 30% against the Dollar from this time last year, the Lira is worth less than half its USD rate of November 2018.
That has helped drive the gold price for Turkish investors and consumers almost 50% higher so far in 2021, setting fresh all-time highs today.
"We will save our people from the scourge of interest rates," said Turkey's president Recep Tayyip Erdoğan to his political party yesterday, denying any influence over the "independent" TCMB but yet again blaming inflation on high borrowing costs and saying that "There is no other way."
The TCMB has now slashed its key interest rate by 4 percentage points since September despite inflation in consumer costs rising to 19.9% per year, the highest since the current steep decline in the Lira's exchange-rate value began in 2018.