END_OF_DOCUMENT_TOKEN_TO_BE_REPLACED

GOLD PRICES ticked sideways against a weaker US Dollar in London trade Wednesday, holding above $1780 per ounce after Federal Reserve chief Jerome Powell rowed back on last week's hint of tighter monetary policy by denying that the US central bank is going to raise interest rates or starting tapering its $120bn of monthly quantitative easing simply because of the recent jump in inflation.
Western stock markets slipped, commodities resumed their uptrend, and major government bond prices rose, nudging long-term borrowing costs lower.
Gold priced in the Euro fell back to €1490 per ounce, erasing its previous 1.0% bounce from Friday's 6-week lows as the Dollar dropped on the currency market.
The UK gold price in Pounds per ounce meantime fell back to £1275, a level first touched in summer 2019 that's nearly 20% below last August's record high.
"[The Fed's] comments have seen markets row back somewhat from their largely position-driven convulsions last week," Reuters quotes one FX strategist.
"[But] the taper tantrum has become taper tranquility," says the Wall Street Journal, contrasting the 2013 crash in bond prices, emerging markets and low-rated corporate debt with this spring's less dramatic action.
"The risk of US monetary policy being normalised sooner rather than later will continue to offer the Dollar support," reckons investment advisory GaveKal, "but it is unlikely to be the dominant factor in currency markets."
With the US trade and government deficits continuing to widen, "On balance the scorecard points to a US Dollar that faces headwinds and is likely to remain on a depreciating track." 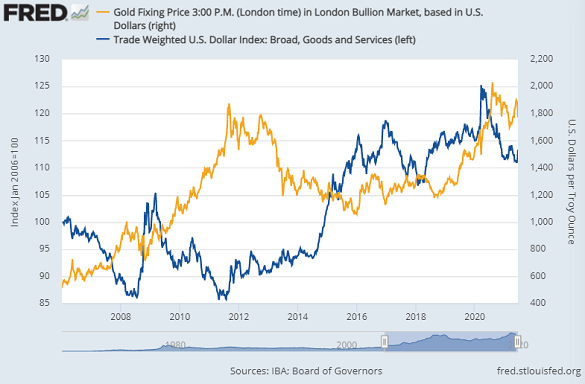 Week to week, gold prices have moved in the opposite direction to the Dollar's value against the world's other major currencies 75% of the time over the last 12 months.
That's up from 67% across the previous 15 years.
"Gold eased lower [overnight] despite a host of Fed officials talking down the likelihood of higher interest rates," says Daniel Hynes, senior commodities strategist at Australasian bank ANZ.
Fed chairman Powell told Congress yesterday that "We will not raise interest rates pre-emptively because we think employment is too high [or] because we fear the possible onset of inflation," a message repeated in separate speeches by 3 senior colleagues.
"Instead, we will wait for actual evidence of actual inflation or other imbalances."
Latest data from US regulator the CFTC say that the week-ending last Tuesday – eve of the Fed's policy statement forecasting an earlier 2023 if not 2022 rate rise from zero – saw hedge funds and other speculators in Comex gold futures and options cut their bullish betting to the least and raise their bearish bets to the most in 4 weeks.
Giant gold-backed ETF trust fund the GLD yesterday ended unchanged in size after seeing a small 0.3% outflow Monday, while its smaller competitor the IAU expanded by 0.2% on new investment inflows.
Gold prices in China – the metal's No.1 consumer nation – today showed a $3 premium to London quotes, extending the historically small but positive incentive for new imports recovered after this month's sudden switch.