END_OF_DOCUMENT_TOKEN_TO_BE_REPLACED

GOLD DEMAND was again weak at the benchmark London pricing auction Wednesday, finding a clearing price at $1085.90 per ounce – the lowest LBMA Gold Price in more than 4 months – as equities and bond prices world-wide also held in a tight range.
"Global markets," says a note from French investment and London bullion bank Societe Generale, "are giving a 70% chance of a US rate hike at the next Fed meeting.
"Gold has hence priced lower, sometimes harshly and sometimes gently, and it finally stopped short of the multi-decade support currently lying at $1080." 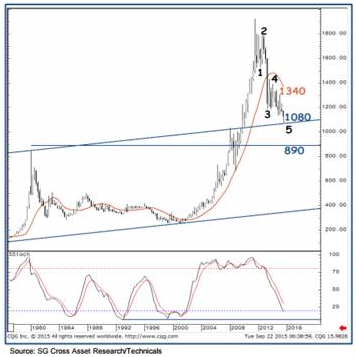 Meantime in India – today celebrating the peak gold-buying festival of Diwali – Q3 jewelry demand had already risen 5% year-on-year from July-to-October 2014 according to data compiled last month by specialist analysts Thomson Reuters GFMS – "the highest third quarter demand since 2008."
Stronger retail investment demand in Q3 – also "attributed to the fall" in Indian gold prices to the lowest level since August 2011 – thus meant India "regained its top position as the largest overall consumer of gold" so far in 2015, beating China by 63 tonnes on GFMS' data with 642 tonnes year-to-date.
China's Chow Tai Fook – the world's largest jewelry retailer – today issued a profits warning, with analysts at US investment bank Goldman Sachs blaming a likely rise in sales of simpler gold items, rather than gem-set pieces carrying higher gross margins.
Potentially weak Diwali gold demand in India, due to a poor harvest after weak monsoon rainfall, will be mitigated by government moves to boost small-bank lending, says the latest monthly India report from analysts Metals Focus – now data providers to the World Gold Council's quarterly Gold Demand Trends report, due out for Q3 on Thursday.
"Steps taken by the government over the last 18 months should benefit rural India," says Metals Focus, "as more people enter the formal banking system [thanks to] smaller bank licenses
given to existing micro finance entities...mandated to allocate 75% of their credit to the priority sector.
"This in turn, should ultimately support rural gold demand" by providing loans when incomes fall.
Back in wholesale trade, "The gold price has proved resilient on the lows," SocGen goes on, noting that "central-bank buying...is strong [and] the futures market has been cleaned out [and is now] much better balanced" after becoming heavily bullish late into the third quarter's 10% rally.
But "ETFs are a concern," SocGen adds, "off-loading systematically every day."
The giant SPDR Gold Trust (NYSEArca:GLD) yesterday lost another 3 tonnes from the bullion needed to back its shares in issue as stockholders were net liquidators for the 8th day in succession.
Launched in 2004 with support from the World Gold Council, the GLD peaked by value in Q3 2011 at $77.5 billion.
It closed Tuesday worth less than $23.2bn, the lowest GLD valuation since January 2009.
Silver prices today re-visited Tuesday's new 8-week low at $14.32 per ounce, extending the metal's drop from late-October's sudden 4-month high to 12.5%.