END_OF_DOCUMENT_TOKEN_TO_BE_REPLACED

GOLD, silver and platinum prices whipped sharply in London trade Wednesday, falling and then rallying as global stock markets dropped, commodities fell and cryptocurrencies sank ahead of today's release of meeting notes from the US Federal Reserve's latest policy decision, expected to show discussion of cutting QE or raising interest rates earlier than publicly stated.
Since the Fed's "no change" announcement at end-April, both US and Chinese inflation data blew past analyst forecasts last week, with market-based forecasts for US inflation hitting their highest since 2013 above 2.5% per annum.
The UK and Canada today both reported faster-than-expected rises in the cost of living for April.
But inflation in the 19-nation Eurozone – the world's 3rd largest single-currency economic bloc – however slowed to 0.7% per year on the 'core' measure excluding "volatile" food and fuel.
With crude oil prices falling sharply and copper also dropping 2.5% after making fresh all-time highs last week, the price of gold sank over $20 per ounce from yesterday's new 3-month high near $1875 only to regain most of that loss as New York trading began. 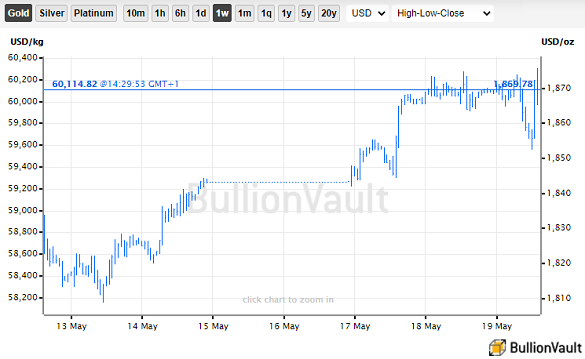 "Big institutional investors are dumping Bitcoin and going back into gold," says a headline at CNBC, quoting analysis from US investment bank and London bullion giant J.P.Morgan.
Crypto-currency markets were a sea of red Wednesday, with top 3 tokens Bitcoin down 14%, Ethereum down 22% and XRP down over 21% over the last 24 hours after Beijing banned financial institutions and payment companies in China from providing any services to crypto traders or providers.
"The country had been home to around 90% of the global trade in the sector," says one estimate, but cryptos' steep volatility threatens to "seriously violate people's asset safety and disrupt normal economic and financial order," says the People's Bank of China, reporting the joint statement from the Communist dictatorship's state-backed internet, banking and payments industry associations.
Beijing's politburo also vowed today to fight "unreasonable" rises in commodity prices by stockpiling raw materials and monitoring spot and futures markets more closely.
"German inflation expectations for the next five-to-10 years have risen to the highest since 2018," says data from Bloomberg ahead of today's Fed meeting minutes.
"My composite measure of UK inflation is now 4.7% based on today's releases," says former UK monetary policymaker Andrew Sentance.
"Latest figures show a broad-based rise in all inflation indicators. It would be negligent for the Bank of England to ignore this inflation surge."
" Inflation has supplanted the global pandemic as a primary risk," says analysis from the mining-industry's World Gold Council.
"[While] the jury is out over whether this inflationary episode materialises, is transient or pervasive...an inflation-protected portfolio should include gold for the benefits it brings."
With gold prices back up near $1870 early after in London, silver cut its gain for the week so far from 4.8% to just 0.9% to trade back at $27.67 per ounce.
The price of platinum dropped through $1200 per ounce for the first time in 2 weeks, losing over 10% from February's 6.5-year high.
"Platinum has probably already achieved its high for the year," said Stephen Forrest at analysts SFA Oxford today, speaking on a special webinar hosted by refining and technology specialists Heraeus to mark what would have been London Platinum Week.
The precious metal will record its 7th year of "significant surplus" between supply and demand in 2021, SFA says, making the 4th different view of platinum's market balance in 4 different reports launched so far this week.
"While the recent rebound in the price of gold may owe something to greater demand for safe havens in response to faltering equity prices," says London-based consultancy Capital Economics, "as well as to cryptocurrencies coming under pressure, most of it can probably be explained by a marked pull-back in the real yields of long-dated Treasuries after their surge earlier this year.
"We doubt the pull-back will last, though, and are sticking to our forecast that the price of gold will end 2021 at $1600 per ounce."
"[But] dips lower will ideally be contained by the $1807 six-week uptrend," says technical analysis from German financial services group Commerzbank.
"Key support is the 2019-2021 uptrend at $1710 and the $1670.49 June 2020 low. While above here we will assume a longer-term upside bias."