END_OF_DOCUMENT_TOKEN_TO_BE_REPLACED

GOLD PRICES slipped on Monday after showing the strongest weekly gain since 2008, made as the worsening coronavirus pandemic saw Comex speculators cut their bearish bets against the metal at the fastest pace on record while the giant gold-backed GLD trust fund saw its heaviest investor inflows since the global financial crisis' stock-market lows of 10 years ago, writes Atsuko Whitehouse at BullionVault.
Global stock markets slipped, while the US Dollar returned to rising – suggesting a new dash for cash after a 4-session break – after President Donald Trump abruptly abandoned his ambition to return American life to normal by Easter, with his top infectious-disease expert warning that between 100,000 and 200,000 may die from the novel coronavirus.
The average spot gold price quoted by London bullion banks slipped 0.7% to $1618 per ounce Monday lunchtime, trimming last week's better than 8% surge.
US gold futures on the CME's Comex meantime fell to $1642 per ounce for April settlement, cutting the derivative contract's differential with spot prices to $24 per ounce from last week's spike to $100.
Dislocation with the London market continued, however, amid the virus-containment shutdown of major Swiss bullion refineries and the lack of airfreight capacity for shipping metal to New York, also caused by government measures to fight the virus.
Facing a possible scramble for gold bullion if bullish Comex traders demanded delivery rather than cash, money managers holding short contracts last week slashed their positions by nearly 4/5ths from a week before, according to data compiled and published by US regulator the CFTC.
The fastest cut on record, that took the gross count of bearish speculative bets down to the lowest since September 2009. 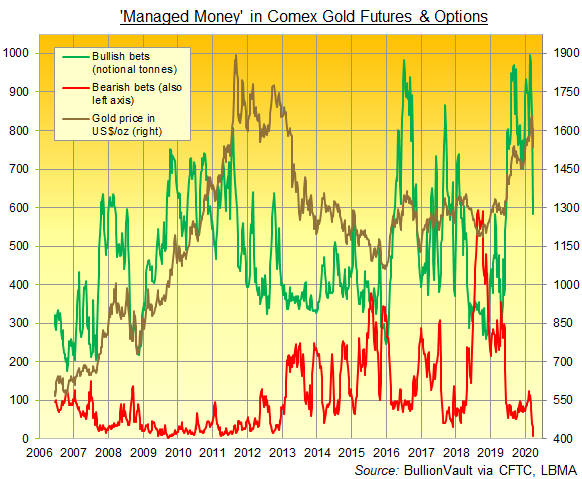 "Gold's hard rally last Monday and Tuesday," says Rhona O'Connell at brokerage INTL FCStone, "was accompanied by heavy short covering by managed-money funds in the face of heightened credit risks."
Last week also saw the number of shares issued in giant gold-backed ETF the SPDR Gold (NYSEArca: GLD) jump by 6%, the biggest weekly gain in 10 years.
That took the quantity of bullion needed to back the GLD's shares in issue up to the most in 3.5 years.
BullionVault – the world No.1 online platform for physical gold – has now seen its users buy 1.2 tonnes net of client selling so far in March, reaching new record holdings above 40.2 tonnes as group.
With many coin and retail bullion-bar shops sold out in Europe, gold prices for Euro investors rose 0.3% to €1466 per ounce Monday while Italy's death toll from Covid-19 passed 10,000 and Rome extended the nation's lockdown beyond this coming Friday's previous deadline.
The UK gold price in Pounds per ounce meantime fell to £1304 per ounce – almost 6% below last Wednesday's new record high  – as Prince Charles reportedly left self-isolation but Dominic Cummings, Boris Johnson's key adviser, joined the Prime Minister and also health secretary Matt Hancock in needing to self-isolate after experiencing coronavirus symptoms.
While strong retail gold investment continues in Europe and the US, gold in Shanghai fixed Monday at the largest discount to London quotes since 2013 at nearly $20 per ounce below comparable London quotes, suggesting very weak demand and ample supply in China, the metal's No.1 consumer country.
With Beijing lifting the lockdown of Hubei, the source province for coronavirus in November 2019 and China's worst-affected region, the People's Bank of China today surprised traders and analysts by cutting a key interest rate in the money markets by 0.2 percentage points, the deepest cut in nearly 5 years.
Six million Hubei residents work in other parts of China, but many still cannot return after January's Chinese New Year holidays, as some local authorities are defying Beijing and refusing to lift travel restrictions.
India, gold's No.2 consumer nation, today saw domestic gold prices sink to the biggest discounts to London in 6 months, reaching $48 per ounce as weak consumer demand, plus high bullion import duty and tax, was compounded by the Modi administration's 21-day lockdown shutting all bullion trading.
Australia today announced a record stimulus package of A$130 billion for wage supplort over the next 6 months,
The Bank of Japan meantime purchased a new record amount of exchange-traded equity funds using quantitative easing, and said it's likely to relax regulatory rules on banks.
China's politburo last week agreed to widen Beijing's spending further beyond its revenues, but state media said the fiscal deficit will not prove as important as household spending in leading "the post-epidemic recovery".