END_OF_DOCUMENT_TOKEN_TO_BE_REPLACED

GOLD BULLION set a fresh near-6 year low at the global benchmark LBMA Gold Price in London on Tuesday afternoon, slipping again as world stock markets rose with the US Dollar, and industrial commodities set new half-decade lows of their own.
Clearing on weak demand at a level below $1080 per ounce for the first time since mid-February 2010, gold bullion's benchmark price – as set by physical demand and supply at 3pm in London – has now shed 10% against the Dollar since the last Fix of 2014.
The Dollar meantime pushed the single Euro currency down today to its lowest level since mid-April – the height of the latest Greek debt crisis – at $1.0670.
That stemmed the drop in Euro gold prices at €1010 per ounce, holding 0.4% stronger for the week so far but more than 1% below Monday's early 2-week high when Asian gold trading opened after the weekend's terror attacks in Paris.
The French stock market today rose over 2%, leading a strong session in Europe after Hong Kong and Tokyo had also closed sharply higher.
Silver meantime edged back down to $14.20 per ounce, some 20 cents above late-August's fresh 6-year low, as copper set new 6-year lows. 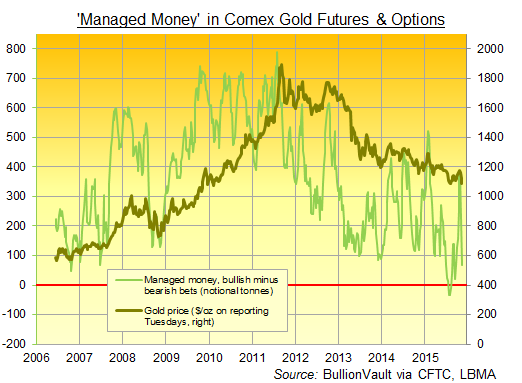 New data Monday from US regulator the CFTC – delayed by last week's Veterans Day holiday – said that the 8% drop in gold prices between mid-October and last week coincided with an 80% drop in the net bullish position held by hedge funds and other 'managed money' accounts in Comex gold futures and options.
Speculators in silver futures and options meantime cut their net long position at the fastest pace since end-July's new 6-year price lows, reducing the balance of their bullish over bearish bets by 35% as the metal dropped 5.4% – the fastest Tuesday-to-Tuesday price drop since November 2014 marked what were then new half-decade lows in the price.
After shedding metal on last month's price pop however, the giant iShares Silver Trust (NYSEArca:SLV) yesterday added more metal to the bullion held to back its exchange-traded stock, taking the total back to 9,867 tonnes – a 3-year low when first reached in mid-October.
Fresh rises in US Treasury bond yields on Tuesday saw the price of all Washington's conventional debt with a maturity longer than 1 year trade below par, according to Bloomberg data.
Average UK house prices rose in September to a new all-time record, government data showed today, accelerating to 6.1% annual growth and with the typical London home-buyer now earning a six-figure salary (equal to $160,000) for the first time.
One week after Greece's first anti-austerity strike since the Syriza Party won power on an anti-bail-out ticket in January, Athens today secured the next €12 billion of bail-out loans from its fellow Eurozone member states – over 80% of which will go to commercial banks, still having to enforce capital controls limiting retail customers to €60 per day withdrawals ($64).