END_OF_DOCUMENT_TOKEN_TO_BE_REPLACED

GOLD BULLION held onto this week's near-$40 gain in London today, heading for its highest Friday finish in more than 5 months in Dollar-price terms as further rises in inflation data followed the 3-decade high reported for US consumers on Wednesday.
Large wholesale gold bullion bars traded in London – heart of the global market – showed a 2.1% weekly rise at $1856 per ounce.
Silver prices meantime continued to outpace gold bullion's gains, rising 3.8% for the week with the highest Friday level since early August at a little above $25 per ounce.
After China's factory-gate and then US consumer-price inflation data both beat analyst forecasts this week, a survey of Australian households said their inflation expectations for the next 12 months have jumped to 4.6%, the highest reading since the Covid Crisis began.
Spain's cost of living today showed a 1.8% jump for last month from September, edging annual inflation one tick lower to 5.4%.
Wholesale prices in Germany meantime jumped 15.2% in October from 12 months before according to state-data agency Destatis, "the highest rate since March 1974," says Trading Economics, "when wholesale prices rose by 15.8" in the wake of the first oil crisis.
Jumping 0.9% in October from September, the headline US Consumer Price Index on Wednesday showed its fastest 1-month acceleration since June 2008, eve of the Lehmans Crash in global financial markets.
That month also saw US crude oil prices extend a strong 18-month rise, almost tripling from the start of 2007 to reach their historic  peak near $150 per barrel.
Here in mid-November 2021, and with central-bank interest rates stuck at all-time lows across major markets, last month's 3-decade high in annual US inflation crushed the real return on cash savings to a fresh historic low of minus 6% per year, and it pushed the real yield offered by conventional 10-year US Treasury bonds back down towards their modern-era lows near minus 5%. 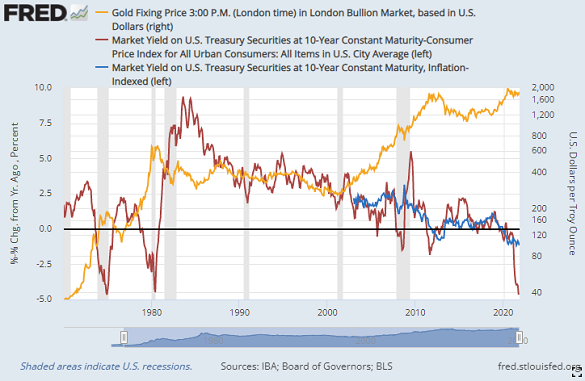 Since the gold price began floating freely after US President Nixon abandoned what remained of a Dollar-gold standard in 1971, major peaks in the gold price have coincided with major lows in 10-year US rates adjusted by out-turn inflation.
While gold's current all-time high of $2075 came as out-turn real rates held above their then-recent lows, it coincided in summer 2021 with a new series low in the yield offered by 10-year TIPS, an inflation-protected bond first launched by the US Treasury in 2003.
Now "10-year real rates hit a new record low" on Wednesday's inflation data, says analysis from Swiss refining and finance group MKS Pamp's Nicky Shiels, pointing to the intraday low of minus 1.24%.
"[That's] providing the fundamental support [for gold] in allowing bullish momentum to be injected."
Updating its view of key factors, MKS's note upgrades the 'Taper Threat' from bearish to neutral for gold prices now that the monthly slowdown in new US Fed QE has begun.
Physical demand among consumers is also upgraded, this time from bearish to neutral, on strong buying in China and India making a "stark change from the summer".
A new bullish factor is the potential for a political "shakeup" at the US central bank, with Democrat President Joe BIden said to be considering a raft of progressive, pro bank-regulation,  diversity and climate friendly policymakers to join the Fed's rate-setting board.
Gold prices also look 'Technically ripe' – a picture upgraded from neutral to bullish in MKS's review – "with strong repricing, aligned with a gamechanging inflation print, indicative of a change [of investment] mindset."
Wednesday's US inflation shock saw gold trading volumes in Comex gold futures and options jump 70% from Tuesday to the highest since late-May's rise above $1900 per ounce.
But outside the derivatives market, gold investment has remained soft so far, with the giant gold-backed SPDR Gold Trust (NYSEArca: GLD) expanding only 0.06% this week while the smaller iShares gold ETF (NYSEArca: IAU) closed last night 0.13% smaller than last Friday's finish.
Euro prices for gold bullion today held 3.1% higher from last weekend's level, trading €50 higher per ounce at €1621 – the highest Friday finish in 53 weeks.
The UK gold price in Pounds per ounce today held £10 below Wednesday's sudden 10-month highs near £1395.
That 3.0% weekly rise in gold bullion for UK investors has come as Sterling fell further on the foreign exchange market, extending last week's drop following the Bank of England's surprise 'no change' decision on interest rates after new GDP data yesterday said that annual growth in the world's 5th largest national economy slowed hard in July-to-September, dropping to 1.3% from the second quarter's 5.5% rebound as Covid restrictions were relaxed.
Crude oil meantime fell further from Wednesday's 1-week high, trading nearly $5 below last month's 7-year peaks above $86 per barrel of European benchmark Brent.
Global stock markets rose after slipping 1.1% from Monday's new all-time high on the MSCI World Index.
So-called crypto-currency Bitcoin slipped again, trading 7.5% below Wednesday's new record high.