END_OF_DOCUMENT_TOKEN_TO_BE_REPLACED

GOLD BULLION prices held onto yesterday's steep drop Wednesday in London even as major government bond prices rallied, pulling longer-term interest rates back from this week's new multi-year highs but leaving 10-year inflation-adjusted US bonds just near zero at their highest since March 2020's Covid Crisis.
Global stock markets rose again after increasing for only the 3rd session in 10, while natural gas and oil prices also rallied, taking Brent crude almost 4% above yesterday's 1-week low, as Russia's deadline passed for Ukrainian troops defending the port city of Mariupol to surrender.
Moscow's invasion of its western neighbor has displaced 12 million people, the United Nations said Wednesday, with 5m fleeing the country.
Taking gold bullion back to $1947 per ounce, Tuesday's $30 drop reversed last week's gain in terms of all major currencies except the Japanese Yen and Swiss Franc – both formerly seen as 'safe haven' assets but currently weak on the FX market as monetary policy begins to tighten everywhere except Tokyo and Zurich.
Calling 2022's strong upturn in inflation "temporary", Swiss National Bank chair Thomas Jordan told an event in Washington last night that "we are using interventions when we believe the [Franc] exchange rate is too strong...bringing inflation into negative territory." 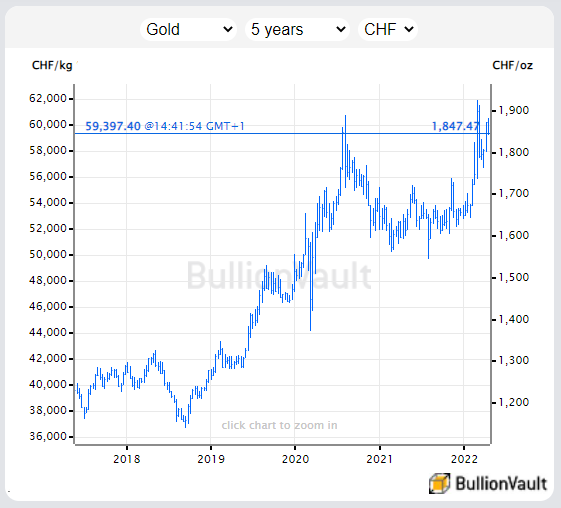 The Bank of Japan meantime re-confirmed today that it will buy unlimited quantities of 10-year JGBs to push up their price and so lower their yield after Tokyo's 10-year borrowing costs this week hit the highest since New Year 2016 at 0.25% per annum,
Gold bullion in CHF today traded less than 5% below early March's new all-time high, while the JPY price slipped barely 2% from yesterday morning's fresh peak.
Bullion prices in China also slipped back Wednesday in Yuan terms, but that saw the discount for metal landed in Shanghai ease to just 50 cents per ounce below London quotes, suggesting a rebalancing of domestic demand with supply after household buying in the No.1 gold consumer nation dropped across the first quarter of this year.
Shoppers in the UAE are meantime waiting to see if Tuesday's pullback can't be extended, reports GulfNews in Dubai, as traditionally strong demand ahead of the Muslim festival of Eid – falling at the start of May this year – has been hampered by gold's recent spike back towards $2000 per ounce.
Among Western gold investment products, giant exchange-traded fund the SPDR Gold Trust (NYSEArca: GLD) yesterday grew by 0.6% to need 1,107 of bullion backing, its largest size since February 2021.
The smaller and cheaper iShares gold ETF (NYSEArca: IAU) was unchanged, also at its largest in 14 months.
While China's CSI 300 index lost another 1.5% on Wednesday to trade 1/5th below this time last year, the EuroStoxx 600 index added 1.0% for the day after the developed-markets MSCI World Index showed a 1.0% rally overnight.
New York futures pointed higher despite streaming TV service Netflix (Nasdaq: NFLX) losing over 25% in pre-market trade after announcing its first quarterly drop in subscriber numbers for more than 10 years, with a further 1% drop in subscribers forecast for April to June.