END_OF_DOCUMENT_TOKEN_TO_BE_REPLACED

GOLD BULLION held little changed in price Friday in London's wholesale large-bar market, trading above $1930 per ounce to show a weekly loss of 1.2% as new US data said the world's largest economy added far fewer jobs than analysts expected for March.
Western stock markets edged higher after yesterday's drop, while oil prices steadied around $100 per barrel after falling amid news of Russia offering discounts to India, its last remaining major buyer, as the Biden White House considers the largest-ever release of crude stockpiles from its strategic reserve.
Russia's invasion of Ukraine saw European Brent crude oil prices rise 36.3% across the first 3 months of 2022, its fastest quarterly jump since June 2009 if the historic volatility of 2020's Covid Crisis is excluded.
Gold bullion bars ended Thursday with their largest quarterly price rise since spring 2020's Covid Crisis, gaining 7.5% in Dollar terms from the end of last year.
Global equities in contrast saw their steepest fall since Q1 2020, down 5.5% on the MSCI World Index. 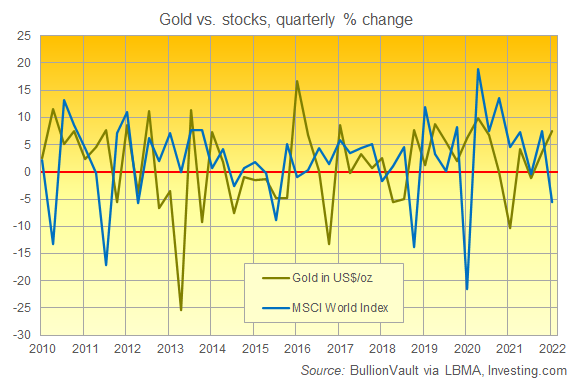 Non-farm payrolls in the US expanded by 431,000 last month according to the Bureau of Labor Statistics first estimate, more than a tenth below Wall Street's consensus forecasts.
US interest-rate expectations continued to rise however following Thursday's new 4-decade high for inflation on the core PCE measure, as did longer-term rates in the bond market.
With US central bank the Federal Reserve targeting inflation of 2.0% per year, the cost of living excluding fuel and food rose 5.4% per year in February on yesterday's data, the fastest since April 1983.
Average wages last month rose 5.6%, the BLS also said Friday.
"We expect the Fed to use the popularity of inflation fighting among the public and politicians to frontload policy rate hikes," says London bullion market-making bank Standard Chartered.
"The lack of pushback even from relatively dovish FOMC participants points to FOMC consensus."
"There has been a very large increase in physically-backed gold ETFs since the end of January, which accelerated after the Ukraine invasion," says UK fund manager James Luke at Schroders.
"I think it's more likely that the most sizeable shifts in the gold market...will almost all be related to huge uncertainties around the Fed's hiking cycle given the risks of unintended consequences for economic growth or financial markets.
"Since 2008, each time the Fed has tried to remove monetary stimulus the market has forced it to change course."