END_OF_DOCUMENT_TOKEN_TO_BE_REPLACED

GOLD BULLION BARS traded in London's wholesale market held onto most of their overnight $20 price drop per ounce on Friday but headed for the first weekly rise in 3 after the shock jump in US inflation reported Thursday.
Longer-term interest rates eased back slightly from Thursday's spike to fresh 31-month highs on 10-year US Treasury bonds and 38-month highs on comparable German Bunds.
But betting on next month's US Fed interest-rate decision held onto yesterday's leap – driven by news of the worst US consumer-price inflation since the recession of 1982 – to price a half-point hike as a near dead-cert, according to the CME exchange's FedWatch tool. 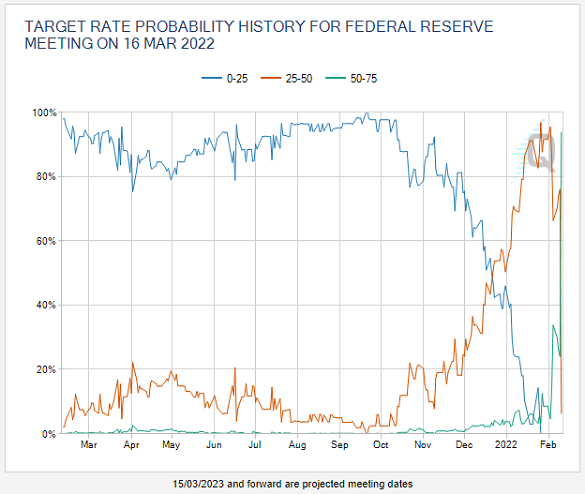 Global stock markets slipped after Wall Street's sharp drop, putting the MSCI World Index on track for its 5th weekly drop in 7 so far in 2022.
Crude oil steadied but headed for its first weekly price drop since mid-December at $91 per barrel of Brent, while copper sank 2.5% from yesterday's 4-month peak.
"Federal Reserve officials are in no rush to raise interest rates prior to their scheduled policy meeting next month," declares Bloomberg today, "nor is a half percentage-point move in March yet likely."
The article names two Fed officials who have spoken against an immediate or steep hike in rates – Mary Daly of the San Fran Fed and Thomas Barkin of the Richmond Fed, neither of them are voting members in 2022 – versus 1 policy-maker in favor.
"A sensible response to [this] surprise inflationary shock" would be a half-point hike in March, voting FOMC member James Bullard of the St.Louis Fed said Thursday, although he added that he will defer to chairman Jerome Powell's opinion.
"I don't think there's any compelling case to start with a 50 basis-point increase," said Bullard's fellow 2022 voting member – and fellow 'hawk' – Loretta Mester of the Cleveland Fed this week.
Despite Thursday's leap in expectations for higher Fed rates, plus the rise above 2.00% per annum in benchmark 10-year Treasury yields, the giant GLD gold-backed ETF ended the session unchanged in size after growing 0.4% for the week so far.
Smaller competitor the iShares IAU gold ETF was also unchanged in size to show net expansion of 0.9% in the quantity of gold bullion needed to back its shares in issue from last weekend.
iShares' SLV silver ETF was similarly unchanged, heading for its 3rd weekly expansion on the run with a near 1.0% inflow from last Friday's finish.
Silver prices held firmer than gold bullion bars on Friday, heading for a 50-cent weekly gain at $23.05 per ounce, up by 2.3%.
Gold's weekly percentage gain was half that size, with prices trading below $1830 ahead of Friday's benchmarking auction of wholesale bullion bars in London.
Gold priced in Euros meantime headed into the PM Fix above €1600 per ounce, a weekly close  achieved in the world's central bullion trading and storage center only 21 times before, with a gain of 1.5% from last Friday afternoon.
The UK gold price in Pounds per ounce rose less, up 0.8% for the week at £1347 per ounce as Sterling gained on the FX market following news that – after shrinking by 9.4% with the worst slump of any major economy in the Covid Crisis of 2020 – UK GDP grew 7.5% in 2021, leading the G7 on an annual basis but coming in the middle of the pack" for 2019-2021 performance according to the Office for National Statistics.