END_OF_DOCUMENT_TOKEN_TO_BE_REPLACED

GOLD BULLION rallied against a fast-falling Dollar in London trade on Tuesday but slipped against both the Euro and British Pound as interest-rate forecasts in the US bond market pulled back from last week's 'hawkish' Federal Reserve shock.
Global stock markets rose again after Monday's gains cut January's losses to 5.5% on the MSCI World Index, still the worst month since the Covid Crash of March 2020.
The Dollar in contrast fell to a 4-session low on its trade-weighted index against the rest of the world's major currencies, slipping over 1% from Friday's 19-month high.
That saw gold bullion prices reach almost $1809 – 1.6% above Friday's 6-week low – before giving back $5 per ounce, but the precious metal held unchanged for the week so far in Sterling beneath £1335 and down 0.4% in Euros back beneath €1600.
US Treasury bond prices also rallied, edging the yield offered to new buyers of Washington's 10-year debt back down to 1.76% per annum, the lowest since last Tuesday.
Wednesday's January FOMC statement and press conference saw Fed chairman Jerome Powell hint that the US central bank might raise its key policy rate, still at 0% in the face of 7% inflation, at every 2022 policy meeting from March.
Ten-year yields then spiked to 1.87%, the highest such rate since January 2020 – before the Covid pandemic and stimulus saw borrowing costs collapse – as traders, analysts and pundits chewed over Powell's comments. 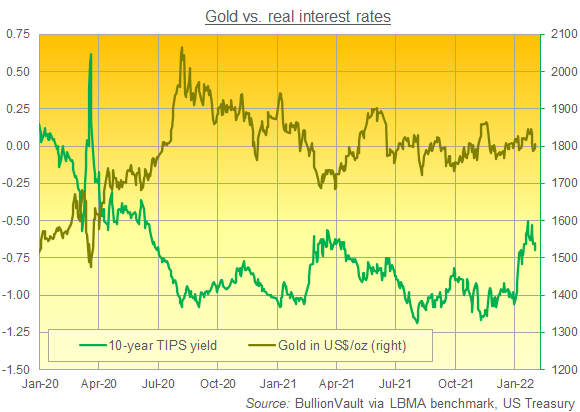 "Having digested the more hawkish policy stance, US Treasury yields have dropped back and inflation-adjusted yields have moved more negative again," writes Jonathan Butler, head of business development at Japanese conglomerate Mitsubishi's precious metals division, "therefore maintaining a relatively favourable macro environment for gold."
Tracking the bond market's guess for how far interest rates might outstrip inflation over the next decade, the yield on 10-year TIPS today last week shot to minus 0.50% per annum – the least negative in 18 months – but edged lower again on Tuesday, back down to minus 0.72%.
"Though gold will be lacking buying support in [No.1 consumer nation] China amid this week’s Lunar new year holiday," Butler continues in a note to clients, "from a technical point of view gold remains close to the 100-day moving average at $1795 and looks to be building support ahead of another move higher."
Giant gold-backed ETF the SPDR Gold Trust (NYSEArca: GLD) expanded once again Monday, taking the growth in its shares in issue to 4.3% for January, the biggest monthly inflow of investment demand since July 2020.
The smaller iShares IAU gold ETF product grew by 0.2% while the largest silver-backed ETF, the iShares Silver Trust (NYSEArca: SLV) expanded by 0.6% across the month.
Betting on the level of US Fed Funds interest rates at the end of 2022 also eased back Tuesday, putting the chance of 5 hikes or more at 63.4%, down 1 percentage point from Monday.
Silver prices meantime rose faster than gold versus the Dollar – briefly touching $23 per ounce for a 2.3% rebound from Friday's 3-week post-Fed low – and also gained in Euros and Sterling.
Energy prices fell in contrast, with Brent crude oil dropping almost $3 from last week's new 7-year high of $91 per barrel, after Russia boosted natural gas supplies to Western Europe via a pipeline running through Ukraine, around which Moscow has massed 100,000 troops in a stand-off over the former Soviet state ever joining the US-led Nato military alliance.
"Top-level talks aim to avert threat of Ukraine war," says Al Jazeera amid a "flurry of diplomacy" with Russia's President Putin meeting Hungary's Prime Minister Orban while the UK's Boris Johnson – now under criminal investigation by the Met Police regarding repeated breaches of his own Covid lockdown laws inside 10 Downing Street – visit Ukraine's President Zelenskiy in Kiev as US Secretary of State Blinken talks by phone with his opposite number in Moscow, Lavrov.