END_OF_DOCUMENT_TOKEN_TO_BE_REPLACED

GOLD BARS traded in London's wholesale market slipped towards 1-week lows in terms of all major currencies on Tuesday, edging down as global stock markets rose for a 2nd session despite fresh threats from Russia towards neighboring nations in Europe.
Moscow will "resolve by any means" Lithuania's block on rail freight into Kaliningrad – the isolated Russian province sandwiched between Nato member states and home to Russia's Baltic Sea Fleet – said a pro-Putin senator today, while a Kremlin spokesman called the move by Vilnius, made in protest against Russia's invasion of Ukraine, "illegal".
"Before Ukraine it was Georgia," said that country's Prime Minister Irakli Garibashvili today, aligning his nation with Western sanctions against Moscow and highlighting Russia's 2008 invasion of 'breakaway' region South Ossetia.
"Russian troops occupy 20% of our territory. This is a reality. It's ongoing."
Switzerland imported over 3 tonnes of gold bullion from Russia in April, Bloomberg notes of the latest trade data, apparently destined for the country's gold bar refiners for the first time since Russia began its invasion of Ukraine.
Moscow's aggression triggered financial sanctions against many Russian businesses, but not – as yet – against commercial bullion flows, despite the standards-setting LBMA suspending acceptance in London of gold bars newly-cast by Russian refiners.
The world No.2 gold-mining nation, Russia exported 73 kilograms of gold to the UK in April, separate trade data say, just 0.3% of the average monthly level prior to March. 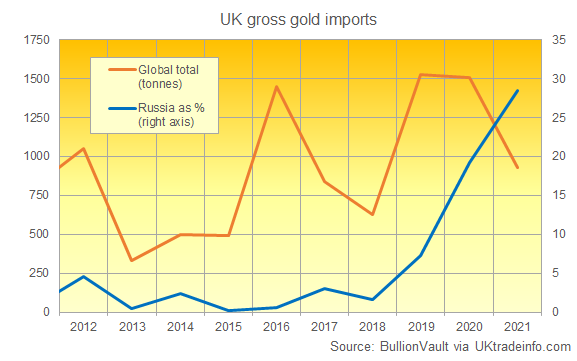 "The European Commission [is] working on adding gold to a possible next round of sanctions," reports Reuters.
While it is "not yet clear whether the measure could ban export to Russia, imports from Russia or both," the discussions are believed to center on the Central Bank of Russia, now the world's No.5 official-sector gold bars holder following its massive gold purchases during the 2014-2018 sanctions over Moscow's invasion and annexation of Crimea.
April's Russian shipments to Switzerland "represent about 2% of gold imports into the key refining hub" says Bloomberg, and although the LBMA's suspension of Russian refineries "was viewed as a de facto ban on fresh Russian gold from the London market...the rules don't prohibit Russian metal from being processed by other refiners."
Thanks to Russia's blockade of wheat and other agricultural exports from Ukraine's Black Sea ports, "Africa is a hostage of Russia's war on Ukraine," said Ukrainian President Volodymyr Zelensky on Monday in an address to the African Union, warning that "food prices are catastrophically rising [and] have already brought this war to the homes of millions of African families."
Global wheat prices have sunk so far in June however, dropping to 10-week lows on Tuesday and losing more than 1/5th from last month's touch of 2008's record highs, as harvests began in North America and Europe.
While crude oil prices rallied on Tuesday, back towards $120 per barrel of European benchmark Brent, large gold bars traded in London slipped to touch $1830 per ounce against a falling US Dollar.
That saw gold bars priced in Euros dip below €1740 for the first time in a week as the UK gold price in Pounds per ounce continued to trade beneath £1500.