END_OF_DOCUMENT_TOKEN_TO_BE_REPLACED

GOLD BAR prices sank to new 9-week lows below $1885 per ounce in London on Wednesday, sliding back from an earlier rally as global stock markets bounced again from a fresh plunge after China's President Xi called for an "all-round" upgrade of the world No.2 economy's infrastructure, from energy and transport to rural sewage and national security.
Base metals, wheat and crude oil meantime steadied after slipping from March's new or near-record highs following Russia's invasion of Ukraine.
Natural gas prices in Europe jumped 10% at the start of trade after Gazprom (MCX: GAZP) cut off supplies to Poland and Bulgaria – both heavily reliant on Russian flows – for not paying it in Rubles as ordered by President Putin.
Day-ahead electricity costs also jumped to 4-week highs for Polish energy providers, with energy prices edging higher across the region.
"The high gold price has aggravated the wait-and-see mood of private investors, and the volume of small gold bars sold has dropped sharply," says the China Gold Association of its new January-March data today.
"The consumption of gold jewelry remained strong from January to February [but] the price of gold has soared and is approaching the highest level in history." 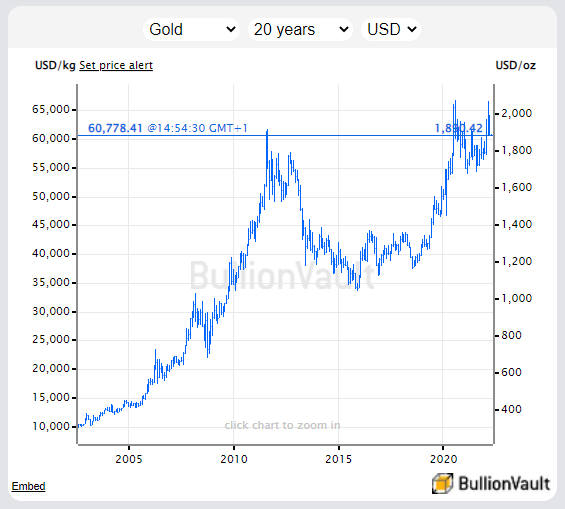 Lockdowns imposed by China's zero-Covid policy – amid which Shanghai chipmaker SMIC now has 2/3rds of its workers sleeping at its factory so they can continue working – have brought its economy "near breaking point" according to analysts at French investment bank Société Générale.
Loading activity at Chinese ports has fallen "below levels seen during the first coronavirus outbreak in 2020 and construction has plummeted," says Bloomberg News, citing satellite data.
Already in March, the jobless rate in China – gold's No.1 consumer market – had jumped to a 21-month high as its massive real-estate and construction sectors slumped.
Chinese equities today led a rally in global stock markets after the MSCI World Index fell hard yet again overnight, sealing a 2.3% drop on a plunge in US shares to close Tuesday more than 13.0% down for 2022 to date.
China's CSI 300 index has lost 20.8%, hitting its lowest since May 2020.
Having fixed on Monday afternoon at $1895 per ounce, the lowest London benchmark price since the eve of Putin's invasion on 24 February, gold bullion yesterday fixed at $1904.60 before sliding $15 overnight as news of China's stimulus broke, only to rally back again before dropping to $1884.
Ahead of next week's May 2022 US Federal Reserve policy meeting, "market participants are discounting an aggressive rate hike trajectory for this year and hence we are witnessing pressure on the safe haven metal," says MoneyControl in gold's No.2 consumer market of India today, quoting Navneet Damani at Motilal Oswal Financial Services.
"[But] markets have already factored in a 50 basis point rate hike in May," counters Sriram Iyer at stockbrokers Prabhudas Lilladher, "[so] gold could find support on the back of geopolitical and macroeconomic uncertainties, especially after recent speculation emerged that quicker-than-expected interest rate hikes could dent economic growth."